Daniel Lazare is the author of The Frozen Republic: How the Constitution is Paralyzing Democracy and other books. He writes regularly for Jacobin and Consortium News. 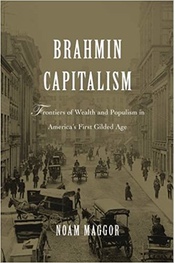 Inside Noam Maggor’s somewhat over-stated examination of nineteenth-century capitalism is a modest little study struggling to get out.

It concerns Boston’s upper-class “Brahmins” as they wrestled with forces unleashed by the anti-slavery struggle and post-Civil War industrialization.  As Maggor notes, Boston’s financial class had forged deep ties with Southern slaveholders, lending them money to expand their plantations and then financing the construction of a network of local mills to spin the raw cotton into finished cloth. Brahmins controlled the cotton trade coming and going, reaping profits that fueled the growth of powerful local institutions such as Massachusetts General Hospital, the Boston Athenaeum, and Harvard College.

But then came the financial crisis of 1857, Fort Sumter, and a Union naval blockade.  The result was not only to wipe out an entire industry but to discredit a Whig aristocracy that had staked its fortunes on a continued flow of cotton.  As the Civil War intensified, the old aristocracy found itself forced to yield ground to a rising young generation fired by the ideals of abolition and free labor.

Maggor handles this part of the story well.  Conceivably, Bostonians could have stood by passively as their manufacturing base crumbled into dust.  But the city’s legions of skilled workers and mechanics stepped into the breach, opening thousands of small shops that turned out everything from stationery goods to saddles, harnesses, soap, candles, photographic equipment, and so on.  The result was “a golden age for the urban industrial economy,” a dense jungle of mechanical creativity that would have gladdened the heart of an urban theorist like Jane Jacobs.

But Brahmins were not as enthralled.  Rather than a Manchester-on-the-Charles, they wanted a genteel financial and cultural center from which to survey a continent awaiting their investment capital.  When mechanics petitioned in January 1877 to hold their triennial exhibition on Boston Common, the upper classes thus sprang into action.  Music festivals, painting exhibitions, and flower shows were one thing, a horrified member of the elite observed, but steam-powered machines? It was too horrible to imagine.  As usual, aesthetics masked more venal concerns.  Not only were Boston’s mechanics politically aggressive, but their businesses, according to Maggor, “were too diffuse, too eclectic, and too numerous to absorb the enormous capital reserves of the city’s major banking institution.”  They were both pushy and unprofitable from an upper-class point of view, which is why the Brahmins mobilized to block them.

They eventually prevailed [156].  It's an interesting tale, certainly, but what does it have to do with industrial development as a whole?  This is where Brahmin Capitalism runs into trouble.  Rather than grand narratives involving nations, continents, and technological breakthroughs, Maggor says his goal is to “locat[e] many of the important trajectories of the era on subnational scales of analysis – city, metropolis, territory, and region – which have been concealed under a blanket cast by more conventional national optics” (emphasis in the original). Steam power, telegraph lines, and other mega-developments must all take a second seat as historians focus their attention on intricate political battles playing out in individual urban settings.

Or so Maggor seems to suggest. But there’s a problem. Brahmin Capitalism is silent about whether similar battles were erupting in other metropolises at the same time, not only New York, Philadelphia, and Chicago but Turin, Milan, and St. Petersburg, which were also emerging as industrial hotspots.  If they were, then it's unclear precisely what Boston's role  with regard to the larger drama.

It also has nothing to say about larger forces that were not only reshaping the US economy in general, but Boston as well.  After all, Boston’s skilled workers and mechanics did not create an industrial renaissance de novo.  Rather, they took advantage of a process that Union war orders helped jumpstarted.  Meanwhile, electrification would soon give rise to a trolley boom that would turn urban geography upside down – not just in Boston but in countless other cities and small towns as well.  Steamships were bringing in vast numbers of immigrants who would soon overwhelm local elite, while Henry Ford’s mass-produced motor car would upset the apple cart even more.

While Brahmin Capitalism stresses the power of Boston’s Brahmin's, the real story is of an elite fighting a rearguard action against forces far beyond its control.  Maggor emphasizes the role of local forces in shaping national development as a whole.  But the relationship winds up more obscure than when he started.