Review of Eric Foner’s “Battles for Freedom: The Use and Abuse of American History” 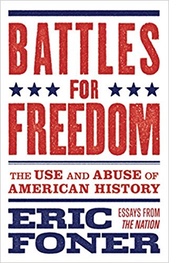 The Nation magazine has served as a bastion of liberal thought since Reconstruction, providing a home for the writings of journalists, politicians, and scholars. Among these scholars is historian Eric Foner of Columbia University whose contributions to the Nation from 1977 to the present are gathered in the aptly titled Battles for Freedom, as the concept of liberty is at the core of Foner’s scholarship focusing on such topics as abolitionism, Reconstruction, and Abraham Lincoln. These selections highlight Foner as a public intellectual who is willing to engage with the major issues of our time and does not retreat into the isolation of academic objectivity and the ivory tower. Foner is a man of the political left but is hardly doctrinaire in embracing a radical tradition in American history from Tom Paine to Bernie Sanders that has struggled to expand the fabric of freedom within American society.

In reading this collection of essays from Foner one is struck by the continuing relevance of his writings. The first Foner piece commissioned by the Nation was an essay commemorating the fiftieth anniversary of the executions of Italian anarchists Nicola Sacco and Bartolomeo Vanzetti for murder committed during a payroll robbery in Braintree, Massachusetts. In examining the stories of Sacco and Vanzetti, Foner emphasizes how their status as Italian immigrants who adhered to the philosophy of anarchism was employed to discredit the two men—a reminder that xenophobia in American politics is hardly a new phenomenon. After all, Foner’s father was a New York City college professor who was purged in the 1940s for his leftist political beliefs.

The willingness to take a public stand on issues confronting the nation has also made Foner a controversial figure. In the wake of 9/11, Foner was denounced as a traitor for his opposition to passage of the Patriot Act and insistence that fear of terrorism not serve as an excuse to abandon civil liberties. In addition, Foner’s pieces for the Nation express concern about the teaching of history in post 9/11 America in which a celebratory American exceptionalism replaces critical analysis. Foner laments that “The self-absorbed super-celebratory history now being promoted will not enable students to make sense of either their own society or our increasingly interconnected world” (132). Instead of patriotic propaganda, Foner calls for a usable past in which history may be enlisted to address the issues confronting contemporary America. His respect for the study of history is quite evident in Nation pieces lauding the contributions of three very different historians: Richard Hofstadter, Foner’s adviser at Columbia, a former radical who was later a founding father of the consensus school of American historiography; Howard Zinn, whose work is often eschewed by professional historians but embraced by the general public; and Marxist scholar Eric Hobsbawm, whose life and work Foner praises as contributing to the struggle for a better world.

As a historian whose work has focused upon freedom, abolitionism, Reconstruction, and Lincoln, many of Foner’s Nation essays discuss issues of race in American history. As an advocate for racial equality, Foner still believes that integration supported by policies of affirmative action offers the best hope for racial progress and understanding. He also weighs in on the issue of Confederate monuments whose defense has been embraced by President Trump. Foner acknowledges that many of these statues were constructed to prop up Jim Crow in the late nineteenth and early twentieth centuries or support resistance to the Civil Rights Movement in the 1950s and 1960s, but he does not necessarily believe that the solution is the destruction of these monuments. Instead, they should be supplemented by educational materials that would link the Confederacy to the defense of slavery and help Americans understand that the primary cause of the Civil War was slavery. And the brutal reality of slavery needs to be emphasized over the romanticism of “the lost cause.”

Foner also argues for the building of monuments to honor the black and white heroes of Reconstruction who fought to bring racial equality to the South and were opposed by the Ku Klux Klan. Reconstruction is often portrayed as the betrayal of the Southern way of life, but Foner believes that education and memorialization may offer an opportunity for re-evaluation that will properly recognize the contribution of Reconstruction to the struggle for equality in American life. Foner is also a great admirer of Lincoln due to his capacity for growth on issues of race, moving from colonization to the Emancipation Proclamation and Thirteenth Amendment. Fundamentally an optimist, Foner believes the American people are capable of a similar growth process.

As for the future, Foner denounces the divisive politics of Donald Trump, but he also laments the failure of Barack Obama to take advantage of the opportunity presented by the Great Recession of 2008 to make fundamental changes in the nature of American capitalism. While disappointed with Obama as a mainstream Democrat who refused to challenge established corporate and banking interests, Foner sees promise in the 2016 Presidential campaign of democratic socialist Bernie Sanders, observing that the type of fundamental change advanced by the Senator from Vermont is evidence of how American radicalism and a usable past have persisted into the present day. In discussing his teaching of a class on the radical tradition in America, Foner cautions that the key is to emphasize movements to promote social change and freedom rather than to concentrate upon individuals. Foner has retired from Columbia University, but let us hope that we will continue to benefit from his observations as a public intellectual in the pages of the Nation and other influential publications.