Why You Don’t Want to Marry Your Pen Pal 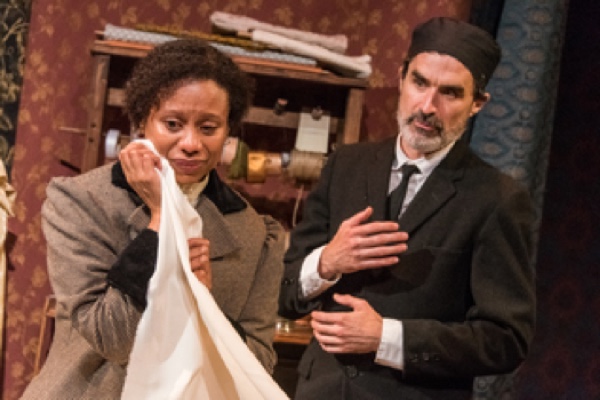 Esther is a thin, tiny 35-year-old African American spinster who lives in a noisy New York City boarding house in 1902 and desperately wants to get married. She has never been with a man and, she believes, at her age the prospects are slim. She works all day in her room at her sewing machine making intimate apparel for women and her sexy underwear (she was the Victoria’s Secret of her day), which provides her with a nice living, but not with a man. Then, out of nowhere, she gets a letter from an anonymous man who is working on the Panama Canal. Some friend told him about her and he wants her as a pen pal. She is thrilled. A lot of romantic letters follow and they get married, meeting for the first time at the altar. He turns out to be good looking and now she is a happy Missus. All seems well.

Then all hell breaks loose.

There are a number of solid themes in Lynn Nottage’s new play, Intimate Apparel, first staged in New York in 2004, that opened Saturday at the Elayne Bernstein Theater at Shakespeare & Company, in Lenox Massachusetts, but the overriding one is as old as the hills – do NOT, NOT NOT marry someone you have never met.

Some people have done that for years through arranged marriages and the mail order bride business, but Nottage warns everybody, in her superb, insightful and incredibly well-written new play, that it often does not work.

The play, which opens after a long prelude of snappy ragtime type music, is not just about pen pal marriages, though. It is a long, gripping saga about race, class and gender in turn-of-the-century America, a time when the nation was bursting with yet another wave of immigrants, rising crime and political upheaval.

It was a time when some women settled for less than their dream man in getting a husband. Parties at Mrs. Dickson’s boarding house, where Esther resides, were singles mingles where the girls there met eligible, but not so attractive, men. They literally grabbed whomever they could get. Mrs. Dickson, who settled for such a man year before, laughs that one prime “fish” at the party was bigger than his horse.

Esther, an illiterate, continues her letters to Panama while she sells her underwear. Her buyers are major characters in the play and, with Mrs. Dickson, create a wonderful world of humanity in New York in that era, even though it was a world of unfulfilled dreams and emotional hurt. There is Mrs. Dickson herself, whose husband died long ago and now struggles to run her boarding house. Mayme is a good-looking prostitute who fancies herself an entertainer and tries very hard to stir up romances with her johns and find a husband, but they do not seem to be interested in anything about her except her body. There is Mrs. Van Buren, a good-looking blonde who can’t seem to hold her wealthy husband, who constantly travels to Europe, alone. And then there is Mr. Marks, a Romanian Jew who is waiting for his unseen, arranged marriage bride from the old country and provides Esther with materials for her underwear. He has a crush on her, but he is white and she is black and they are going nowhere. Or are they?

Nottage has developed deep and admirable, and pitiable, characters in the drama. You love them and fear for them. You want their lives to work out, but they don’t.

The play hits hard on race, but always in a subtle way. The best race scene in the play comes when Mrs. Van Buren assumes it will be all right for Esther to take her to an all-black music concert, but laughs at the idea of her taking Esther to an all-white opera because of color. She just doesn’t get it.

The play hints at sex from time to time, especially during Esther’s wedding night, and there is one outrageous encounter that you do not expect, but this is not a play about sex. It is a play about love and how hard is for anybody to find it, whether in 1905, the year the play ends, or 2017. One interesting aspect of the play are two staged photographs, one labeled an un-named negro couple and another an unknown negro seamstress, to reflect may photos of the era of blacks in which they were not named because they did not count. When you see them in this play, it still hurts.

Director Daniela Varon does an outstanding job with Nottage’s work. She fully understands that the playwright wants a long roll out of her characters and does that. The characters, and the story, grow as the play unfolds. Varon gets extremely good work from the cast. Nahassaiu de Gannes is Esther and she is a dynamo. She is timid and sweet and yet you know that somewhere, sometime, somehow, she is going to explode. Medina Senghore plays the hooker Mayme, a very likable woman who has somehow fallen into her sordid profession and does not seem to be able to get out of it. Christianna Nelson is Mrs. Van Buren, who wants sexier and sexier underwear to keep her man, but no matter how sexy her underwear is, her man is always somewhere else. MaConnia Chesser is the lovable and delightful Mrs. Dickson. Lee Edward Colston II is a wonder as the canal worker, tired of his life and eager to enter a new world through Esther, and Esther’s life savings.

You learn a great deal about history in Intimate Apparel. There is a lot of information in the script about race and gender in New York, and in all of America, in that era. There are stories of repressed women who have no legal leg to stand on. You learn much about arranged marriages of the era, and pen pals galore. The Panama Canal worker, George, tells Esther, and the audience, scary tales of the work on the Canal, in which there were so many tragedies and where so many workers perished.

It is all told with beautiful language and heated emotions. The characters in the play, caught up in various histories, roll towards an explosive and surprising ending in an America that is changing rapidly.