Review of Nancy Weiss Malkiel's " 'Keep the Damned Women Out': The Struggle for Coeducation" 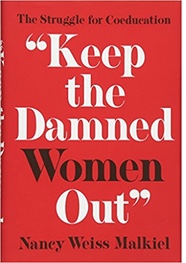 With over 600 pages of text, Nancy Weiss Malkiel’s intensive rendition of how Harvard, Yale, Princeton, Vassar, Wellesley, Smith, Dartmouth, Oxford, and Cambridge grappled with “going coed” in the late 1960s and early 1970s is admirably thorough.  But, perhaps surprisingly—given its length—it is also narrower than it could and should be.  Malkiel characterizes her book as “a study in institutional decision-making” and focuses almost exclusively on internal debates; the larger context of those times is virtually invisible.  Yet that societal context—not just the civil rights, women’s rights, and antiwar movements, but also underlying economic and social developments—is essential to understanding what happened and why it happened when it did.

Return with us now to those thrilling days of yesteryear, the postwar decades that featured a rapidly expanding middle class and a growing demand for college education.  As Louis Menand has summarized it: “Between 1945 and 1975, the number of American undergraduates increased by almost 500 percent and the number of graduate students increased by nearly 900 percent.  In the 1960s alone enrollments more than doubled, from 3.5 million to just under 8 million; the number of doctorates awarded annually tripled; and more faculty were hired than had been hired in the entire 325-year history of American higher education to that point.”  Once limited to a select few, colleges in 1960 enrolled an unprecedented 40 percent of high school graduates; by 1970, it was about 50 percent.  The great majority were students from public high schools, where coeducation was the norm, and a rapidly growing number were young women.

Leaders of single-sex institutions such as Princeton peered out at the surging wave of Baby Boomers and then at their schools' application, admission, and enrollment statistics, and read the obvious trends:  students were less and less willing to consider attending single-sex institutions.  If schools such as Princeton wanted to maintain their elite status, they needed do come up with solutions quickly.  Malkiel, a Princeton historian (and former dean of the college), delved deep into the archives to find out how they came up with them.  Her book provides as much detail as one could ask for about the campus discussions involving administrators, trustees, faculty, and alumni at the nine schools.  (Students’ opinions—almost always strongly favoring coeducation--appear mainly in statistical form.  And the most significant student voices—the ones telling their parents and guidance counselors that they had no desire to go to a single-sex school—aren’t really heard at all.)

Stepping back from the trees to survey the forest, one sees that each institution followed a predictable pattern:  concern led to forming committees (naturally), which produced reports, which listed options (coordination with a school for the opposite sex?  token coeducation?  accept only transfer students?  semester-long or year-long student exchanges?  something else?), which were debated by various constituencies, which resulted in choosing the option that seemed most sensible for that particular school.  Malkiel rightly notes that geography mattered—a lot.  Wellesley and Smith, both close to a number of eligible Massachusetts schools, could work with them and still remain women’s colleges; Vassar, like Princeton, was isolated and obviously couldn’t manage such a compromise.  (Vassar briefly considered Yale’s invitation to move its campus to New Haven.  Once that was rejected, coeducation was really its only option.)  Harvard needed only to redefine its relationship with Radcliffe—not that this was easily done-- to become truly coeducational.

Personalities, such as Princeton’s President Robert Goheen, mattered, too—although in most cases they acted more as catalysts, speeding up the changes, rather than greatly altering their direction.  The main exception to this may have been Wellesley’s feisty president, Ruth Adams, who held the single-sex fort long enough and adamantly enough to thwart the push for coeducation there.  (“I am wary,” she said in early 1970, “of abandoning the commitment of a century because of the pressures of a decade.”)  One can detect early versions of “difference feminism” in Wellesley’s ultimate decision to remain a women’s college.  Adams, however, was no cutting-edge feminist:  in a 1971 letter to the Wellesley student newspaper, which Malkiel doesn’t mention, Adams informed the editors that she wished to continue to be referred to as “Miss Adams,” and “not as that nullity which is Ms.,” which “I deplore,” she said, as “depersonalizing, degrading, and meaningless.”

The fact that Adams’ old-fashioned stance benefited new-fangled ideas might perhaps mitigate Malkiel’s criticism of the men who pondered coeducation at places like Princeton, Yale, and Dartmouth, where, she says tartly, “women and their needs were largely left out of the equation.”  Not surprisingly, they saw their main responsibility as serving the best interests of their own institutions.  In any case, it wouldn’t be the first time that institutional leaders did the right thing for their own reasons.

One reason that the march to coeducation was so painstaking, especially among the men’s colleges, was the careful consideration their leaders gave to issues such as living spaces, athletics and other extracurriculars, and the classroom.  But at none of the schools that eventually went coed was there ever a tipping point when it seemed very possible that they would reverse course.  Of course, despite the planning, once coeducation arrived, so did unexpected complications, some of which are being worked out to this day.  Dartmouth, which arguably had the most resistant alumni and campus culture, had the most difficult time accepting and adapting to coeducation.  Indeed, it was a Dartmouth alum (Class of 1929) who wrote the angry letter that gives Malkiel’s book its title: “For God’s sake, for Dartmouth’s sake, and for everyone’s sake, keep the damned women out.”  But even at Dartmouth, this was merely the last irate squawk of a gone goose.

Writing the history of education is difficult.  The stories often lack overt drama and action, loaded as they are with discussions of policy disagreements and committee reports.  Depicting the emergence of consensus, even on an issue as important as coeducation, is not inherently exciting, especially when some of the factors driving that consensus may be the result of thousands, even millions, of essentially invisible, personal decisions:  all those students and parents preferring coeducation and potentially heading elsewhere.  But pasting a provocative title on a book—or on chapters (Oxford and Cambridge are headlined, “A Tragic Break with Centuries of Tradition” and “Our Crenellations Crumble, We Cannot Keep Them Out”)—adds a frisson of artificial excitement at the expense of interpretive accuracy.

In passing, Malkiel concedes that “coeducation may have had an element of inevitability about it.”  But it was more than just “an element.”  Coeducation was overdetermined, the proverbial idea whose time had come.  In her epilogue, Malkiel notes that by 2015 only four men’s colleges remained in the United States, and the number of women’s colleges was shrinking rapidly.  She does a fine job of tracing how some elite institutions dealt, in their various ways, with the tidal change that brought coeducation to campus.  But exactly what caused that shift in the 1960s remains largely unexplored and unexplained.  One thinks of John Adams’s description of the American Revolution, which, he said, “was effected before the War commenced…in the minds and hearts of the people.”  At least one revolution of the ‘60s happened the same way.