Review of Jerald Podair’s “City of Dreams: Dodger Stadium and the Birth of Modern Los Angeles”

Henry D. Fetter is the award-winning author of Taking on the Yankees: Winning and Losing in the Business of Baseball. 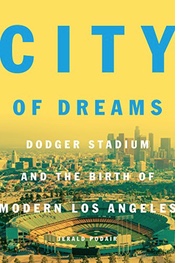 Rivers of ink and buckets of tears have been spilled over Walter O’Malley’s decision to take the Brooklyn Dodgers to Los Angeles in the six decades since that transformational, and for many traumatic, event. But it has been O’Malley’s failure to find a Brooklyn location for a replacement for Ebbets Field, and his battles with New York City planning czar Robert Moses, that have attracted most of the attention. Remarkably enough, Jerald Podair’s City of Dreams: Dodger Stadium and the Birth of Modern Los Angeles, is the first book length account of the Los Angeles angle on the Dodgers’ move. The essential facts concerning Los Angeles’s wooing of the team and Walter O’Malley's construction “of his own stadium on his own land on his own terms” in Chavez Ravine in the face of considerable political, legal and public relations problems were laid out in the press at the time and in Neil J. Sullivan’s pioneering The Dodgers Move West as well as recent biographies of the Dodger owner by Michael D’Antonio and Andy McCue. Drawing on that material, as well as the papers of Walter O’Malley made available to him by the O’Malley family, Podair has written an exhaustive, thoroughly researched and fair-minded account of what the movie version might call “Walter’s Adventures in La La Land.”

The book begins with a brief survey of O’Malley’s unsuccessful effort to replace Ebbets Field with a new, Dodger- owned ballpark in Brooklyn. As is now fashionable, Podair targets New York City planning czar Robert Moses as the immovable object standing between O’Malley’s ambitions and their realization. But, unlike others who have singled out Moses as the villain of the story, he understands that Moses operated within a left liberal political environment that was ideologically hostile to the kind of public subsidy for the Dodgers, a profitable private enterprise, that O’Malley required to acquire the downtown Brooklyn location he sought. (And one suspects that many of those who pillory Moses for failing to subsidize O'Malley with public monies would be blasting him for misusing the public weal had he done so.)

In Los Angeles, O’Malley met with a more receptive welcome for his plans, at least among political and corporate elites, and an “environment," Podair writes, " in which profit seeking was not equated with profiteering.” The city’s leadership approved his proposal to acquire the stadium location he coveted in Chavez Ravine in exchange for the minor league ballpark in south central Los Angeles that the Dodgers had recently acquired from the Chicago Cubs, as well as additional funding for grading of the hillside site and access road construction. But his success on the west coast was not simply due to a political culture that Podair sees as more receptive to public support for private enterprise than in New York but, even more perhaps, to the “fortuitous” (as Podair correctly says) availability of the Chavez Ravine site.

O’Malley had become aware of Chavez Ravine by January 1957 (not in May as Podair writes) and instantly noted that it lay at the heart of the region’s expanding freeway system. (It may well have been that O’Malley made the decision to move the team at that moment.) Years before the Dodgers arrived on the scene, Podair explains, the property had been almost entirely cleared of its Mexican American residents in anticipation of building a high rise modernist public housing project on the site. That plan had been derailed in 1953 (perhaps nipping a Pruitt-Igoe type fiasco in the bud) when a top Housing Authority official who was a secret Communist refused to answer questions about his political affiliations in a state Un-American Activities Committee investigation into suspected Communist infiltration of the authority. (Sometimes the “red baiters” were right). A coterie of Latino activists may continue to blame the Dodgers for the destruction of the “hidden” village where Dodger Stadium stands but the rank and file of Los Angeles Latinos make up the team’s most ardent fans.

In Brooklyn, O’Malley’s plans created problems – his plan required not only a sharply discounted land purchase price but also the demolition and relocation of essential infrastructure in a heavily built up area at great expense to the city. In Los Angeles, the Dodgers offered a reasonably priced solution to a problem – what to do with a largely vacant Chavez Ravine – as well as the prospect of bringing major league baseball to Los Angeles, a goal embraced even by opponents of the particular terms of the deal with the Dodgers.

O’Malley anticipated smooth sailing in Los Angeles but ran into substantial political and legal opposition to a transaction that smacked of what would now be labeled “crony capitalism.” The most immediate, and potentially serious, was a referendum that would veto the deal. According to Podair the referendum was “a battle between two competing visions of LA, that of an ambitious, growth-oriented city and a cautious, fiscally restrained one,” a showdown between “different understandings of civic identity. Did Los Angeles need a downtown similar to those in East Coast cities, a center of activity around which outlying areas revolved like planets around the sun? Or could a collection of satellite communities themselves constitute a viable urban structure?”

But this may be an overly schematic rendering what was at stake in a battle the Dodgers narrowly won with the aid of a sophisticated PR campaign and overwhelming support from the city’s African-American and Latino voters.

Podair recognizes that the contending sides in the referendum cannot simply be reduced to the downtown establishment versus the “Folks” (Podair’s term) out in the neighborhoods. Voters in the San Fernando Valley opposed the contract (although by a fairly narrow margin) but those in other “peripheral” areas supported it. The minority voters who supported the Dodgers were certainly not part of any elite, corporate, downtown or otherwise. Nor can one readily ascertain “fiscal restraint” or opposition to “siphon[ing] resources from outlying neighborhoods that needed roads, schools, sewer lines and other essential infrastructure” by the downtown corporate elite when opponents advanced their own ambitious visions for Chavez Ravine, including the construction of a city owned baseball stadium and other civic improvements (including an auditorium and a zoo) all at taxpayer expense. What seems to have driven the opposition was less a clash of values - or resistance to the downtown power structure – than the not unreasonable belief that the Dodgers had struck too good a deal with a compliant bunch of politicians and that the city had been taken to the cleaners by a slick carpetbagger from Babylon on the Hudson.

As to the proponents, they were less interested in pursuing a vision of a "revitalized " downtown that would mark the emergence of a "modern" city than in doing what was necessary to bring not just big league baseball, but one of the sport's most successful and historic franchises, to Los Angeles.

The book then traces the litigation over the deal that was only resolved in favor of the Dodgers by a ruling of the state Supreme Court, the acquisition of the balance of Chavez Ravine property needed to house of stadium, the televised evictions of the few remaining holdout property owners on the site, controversies over property taxes, zoning and access road construction, and the complex process of building the stadium itself, all of which came to a triumphant, if much delayed, culmination with the opening of Dodger Stadium on April 10, 1962. O'Malley, may have lost a showdown with titans in New York but in Los Angeles he comes off as a Gulliver, beset by a ragtag band of Lilliputians who were never quite able to trip him up.

Podair's earlier book about the 1968 New York City teachers's strike was titled The Strike That Changed New York. In City of Dreams, he argues that the move of the Dodgers and the building of Dodger Stadium was a similarly decisive moment in the history of Los Angeles, marking its transformation from the proverbial fifty suburbs in search of a city to a cosmopolitan metropolis, built around a central core, of the kind associated with traditional city centers. The completion of the stadium signaled the triumph of an elite committed to growth and “modernity” over neighborhood oriented penny pinching “Folks” who were satisfied with the humdrum status quo. According to Podair, “ Dodger Stadium made downtown Los Angeles possible” and “Downtown Los Angeles made modern Los Angeles possible.”

Rather curiously, making Los Angeles “modern” apparently means making it like older, established east coast cities. But that urban model simply does not fit the distinctive reality of life in sprawling Los Angeles. About a decade after Dodger Stadium opened architectural historian Reyner Banham dismissed downtown with "a note...because that it is all downtown Los Angeles deserves" in his classic Los Angeles: The Architecture of Four Ecologies. Banham decried the failure of "pueblo-centric historians ” who insisted "that downtown has got to be important because downtowns are significant and important places in all self-respecting cities” to embrace the novel reality of Los Angeles. Aside from the inconvenient fact that Dodger Stadium is not really downtown at all but is instead located on an isolated hilltop two miles from City Hall, surrounded by acres of parking lots, cut off from the city’s ‘core’ by a network of intersecting freeways and without any practical public transit connection, Podair puts too much weight on Dodger Stadium as the engine of “the birth of modern Los Angeles."

The city actually had a traditional downtown in the years before the Dodgers arrived, with corporate headquarters, courts, government buildings, prominent law firms (one of which would represent the Dodgers), train and bus stations, exclusive social clubs, a central library, newspaper offices, banks, a stock exchange, theaters, a symphony hall and department stores, even streetcars. By the 1950s, it was ripe for the renewal and redevelopment which was underway before O’Malley came calling and would have been pursued in any event. Even as downtown was being redeveloped, alternative business and entertainment centers were being built, notably Century City in west Los Angeles and their numbers have proliferated ever since. O’Malley himself chose to live in Lake Arrowhead, eighty miles from downtown.

More than half a century after the Dodgers arrived, downtown Los Angeles remains a remote afterthought to most inhabitants of the region except perhaps when summoned to jury duty in the civic center’s courthouses. The author concedes "that downtown Los Angeles is less than it could be today" and that "downtown Los Angeles remains a work in progress." If downtown has – at long last – been somewhat revitalized in the last decade or so, with a wave of residential construction, a "Grand Park," hip hotels, art galleries and vibrant (in places) street life, coexisting, however, with a large homeless population, it has nothing to do with the erection of Dodger Stadium.

The making of a “modern” Los Angeles may have required that major league baseball arrive but it did not require the relocation of the Dodgers or the building of Dodger Stadium in Chavez Ravine. It is true that Los Angeles is fortunate to have that team and that ballpark in that location. And there is no denying that Walter O’Malley’s meticulously designed bespoke home for the Dodgers continues to be a wonderful place to watch a baseball game even as the cookie cutter, multi-purpose publicly funded stadiums of similar vintage elsewhere have fallen to the wrecking ball. But Los Angeles would be what it is today even if Brooklyn’s “boys of summer” were still playing in Ebbets Field.