Americans Sons and the Police: The Play 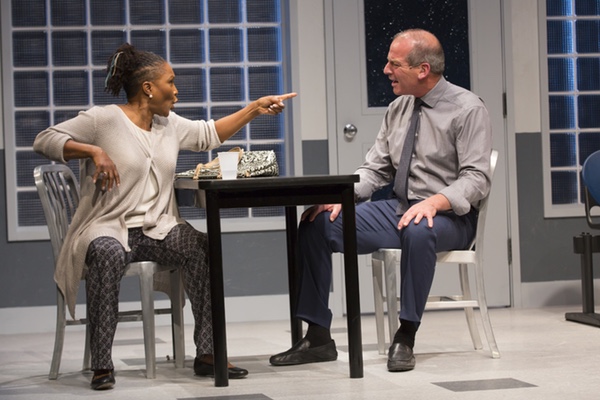 Kendra Ellis-Connor, an African American professor, has just been told that her gifted teenaged son Jamal, who plays guitar, stars in high school sports, got a fabulous College Board score, and is headed for West Point, has been involved in some sort of incident with the police. She is at the precinct, somewhere in the Miami area, at 4 a.m. badgering a white officer in an effort to find out what happened to her son. He has little information and she is frustrated. Over the course of the night, it is discovered that the boy fell into a Trayvon Martin/Tamir Rice type of black kid/white cop incident.

The stage is set for yet another confrontation or tragedy involving white cops and black teenagers. All of the signs are there, just as they were the real life incidents of the police and African American men over the last ten years that brought about demonstrations and riots. They all unfold in Christopher Demon-Brown’s scorching new play, American Son, that just opened at the George Street Playhouse, in New Brunswick, N.J.

The audience does not actually find out what happened to Jamal until the last few moments of the play, and until then is kept mystified as the play takes a number of bizarre turns to show the audience that this incident, and all incidents like it, are murky. People jump to the wrong conclusions, assume too much and let race determine their feelings.

The play is full of mixed signals. First, we learn that Jamal’s dad is not black. He is white. He is also a police officer himself and FBI agent. Second, importantly, the officer involved in the case is not another white redneck, but a black cop. So there is no racial bias.

Third, Jamal and his two black buddies might have brought on their trouble themselves. They had a “Shoot the Cops” bumper sticker on their car (talk about inviting trouble), that mom Kendra supported because of her ultra-liberal views on life and conviction that African Americans will always be the victims of the men and women in blue.

History is built into the play early. It turns out that the police station has been around since the 1950s and, in fact, has two outdoor drinking fountains. One used to be for white people the other for blacks. The Rev. Ralph Abernathy, an early Civil Rights leader, is involved in the story, too.

Then we find out that the cop investigating the case, whom you except to cover it all up, is not white but black, and a veteran of the Afghan war, no less.

Everybody gets emotional in the play. The FBI agent dad acts violently and demands to see his son or the cop interrogating him (he believes at the time). He gets himself arrested. The black woman and black cop get into a fierce racial altercation when she calls him a “tom” and he accuses her of ultra-liberal views that have made her what she is.

Through all of this the audience is convinced that the story is going to go one way, as all these black/white cops stories do, but that is not true. The story changes. At that point the playwright challenges people to remember these types of stories in real life and to think them through one more time.

This play is not really about race, but about race as a backdrop. At the end of the play, you discover that this was not a textbook cop stopping a kid story, but something else. The moral of the story is not that all cops are bad or that black teenagers are wise guys. It is that in a black and white situation, or cop and kid incident, things can go wrong, fast, with bad results. In these situations cops are just as scared about what might happen as the kids, and have usually never been in such a situation before.

Something happens and then, the playwright suggests, everybody yells race the debate starts, and it has happened again and again and again across the United States. Look at the incident in Ferguson, Missouri. A cop is afraid that a young man will hurt him and, in self-defense, he claims, shoots him. Was the cop really in trouble? Did he have to shoot? The other side says the cop murdered the young man. In many of these cases, decisions are made not to prosecute the police and that sets off an emotional tidal wave in the black community covered relentlessly by the press. These incidents go full circle all the time.

The solution to these confrontations, the experts say, is more education for both the police and the public, newer and more diverse police forces, massive reviews of police practices and other things.

The playwright suggests that in addition to all of that, everybody must act more carefully and do what they can to tone down the rhetoric and the steps they take in life (a "Shoot the Cops" sticker being a perfect example of what NOT to do).

The director, David Saint, has done a wonderful job of keeping the audience misdirected until the very end of the play and yanks every bit of emotion out of his actors, who are all outstanding. He gets excellent work from Suzanne Douglas as the mom, John Bolger as the FBI dad, Mark Junek as the first cop and Mark Kenneth Smaltz as the investigating cop.

The George Street Playhouse has a fascinating exhibit of mannequins wearing Jamal’s clothes, from street clothes to his baseball uniform in its lobby, alongside blackboards where members of the audience are encourage to write things about their own sons.

American Son is an explosive, scalding drama. It has been presented at different theaters around the country and is now at the George Street Playhouse. It has earned strong reviews all over America and if it does wind up playing near you, see it. The play is a sharply written story by a superb playwright, an education in race relations and a reminder, as the title says, that we all need to do something in black/white police relations to save all of our American sons in the future.