A Christmas in Wales Is Like Christmas Anywhere in America 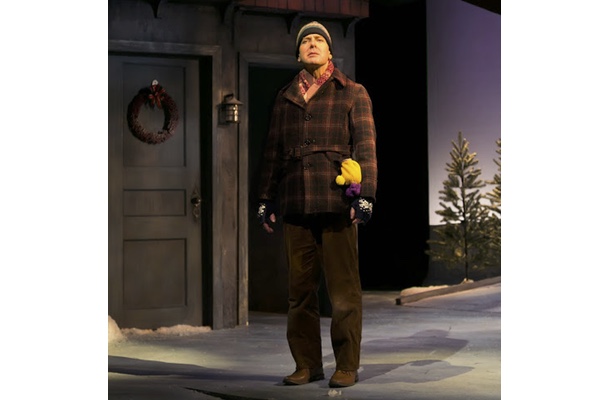 We have a number of wonderful Christmas plays and movies to keep us warm during the holidays. There is It’s a Wonderful Life, A Christmas Carol, A Christmas Story, White Christmas, Holiday Inn and a dozen others. Poet Dylan Thomas’ A Child’s Christmas in Wales usually does not find its place on that list and it should. It is a glorious celebration of Christmas in Wales, anywhere, and deserves more honors than it receives.

The mirthful and magical play about the holidays in Wales in the 1920s was revived again this year by the Shakespeare Theater of New Jersey at Drew University, in Madison, N.J. It opened over the weekend. The play has no real plot. It is the great poet Thomas’ reminiscence of his childhood and it could have been written about Christmas in Washington, New York or Kentucky. It is a universal story and could have been written in any language, too. It is a thoroughly fabulous play, rich in its characters and a terrific holiday treat for anyone.

In the play, the entire Thomas family gathers for the annual Christmas dinner in the seaside village of Swansea. At first, everything goes wrong. The Christmas turkey is burned and someone’s car rolls down a hill. The relatives who arrive for the dinner remember how much they do not like the other relatives there. The kids fight with each other. One uncle annoys all with his socialist speeches; another is a drunk. The women gossip about each other. One man lasciviously pinches a woman’s bottom.

In the second act, the tirades cease and the love of family washes over all. There is an amateur rugby game, a poetry recital, storytelling and lots of boisterous singing (oh, these people can sing and sing loud!).

The strength of Thomas’s holiday play is the mercurial writing and the deft direction. There is a scene at the start of act two when a group of young boys and girls rushes out to a meadow and pretends they are gangsters. One plays James Cagney beautifully (“You dirty rat…”) They are caught by a cop and try to talk their way out of a trip to the village lock up. It is a lovely scene and takes any viewer back to his own childhood and scenes just like it on days when everything was beautiful and there were no troubles in the world.

There is another scene, hilarious from start to finish, starring local village firemen, decked out in their firehouse finery, that arrive to put out a fire that turned out to be just kitchen smoke.

And there is Thomas’s wondrous dialogue, such as his notion that “all the Christmases roll down the hill toward the Welsh-speaking sea, like a snowball whiter and bigger and rounder. like a cold and headlong moon bundling down the sky that was our street.”

Then, at the end of the play, the Thomas character gives a short monologue about family and the holidays that just makes you want to cry in love and joy.

Thomas’s characters are unique, each distinctly different from the other and every one of them memorable. There are sweet women and loving husbands (and some really docile husbands, too). There are the usual detestable visiting cousins whom everybody has to pay attention to but nobody can stand. There are the teenaged friends of Dylan who drop by to grab some free pudding.

Dylan Thomas as himself as a young boy anchors the play. He is played by an adult as a child and the casting (of the gifted Greg Jackson) works well. Through his eyes you see the entire family the way they are, the way they think they are and the way young Dylan sizes them all up.

The director, Joseph Discher, works like he has just come back from Wales himself. He has turned the seaside town of Swansea into a rich and lovely little village with a nip in the air in the middle of the holiday season. He works magic in the way he stages indoor rugby matches, dancing, dining and, especially, creating a house full of ghosts. He even has a train rumble by in the distance, announcing itself with a loud blast of its horn.

Is this Christmas in Wales in the 1920s an accurate reflection of Thomas’s family, of all of our families? Of course not. It is remembrance of people, and their Christmases the way we wanted them to be. We remember the past, our history, the way we want to remember it, and there is nothing wrong with that.

PS: I saw this play Sunday afternoon. That morning I put up my Christmas tree. That night it snowed here in New Jersey. I woke up and saw the world covered by a gentle white snowfall. Dylan Thomas would have loved it.