Texans Yearning for Home in the Roaring Twenties 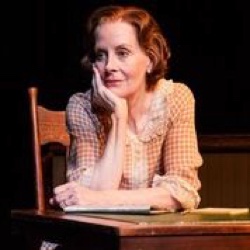 There is something sad, something blue, something nostalgic and something just wonderful about the revival of playwright Horton Foote’s play Roads to Home that opened this week at New York’s Cherry Lane Theater.

The drama, set in Foote’s native Texas in the 1920s, is the sweet and loving story of several friends who struggle with assimilation in booming Houston, full of big oil wells and bigger bank accounts, where money rules, booze flows and men are gunned down on the sidewalk. The women are from the small town of Harrison, where life was simple and sweet, they always believed, and where love and friendships grew. In the big city, with its sin and corruption, they do not.

Roads is three one-act plays lumped together to tell an extended story. In the first, A Nightingale, set in 1924, two middle-aged chatterbox women, Vonnie and Mabel, each in a race to tell the other the latest gossip, are visited by a young woman they know from Harrison, their old home town. She has been coming regularly and seems mentally disturbed. For no reason she starts firing invisible revolvers to recreate the sidewalk murder of her father and reminisces about friends she never had and tells heartwarming stories about her children, who were taken away from her because of her mental instability. She is lovely, she is tender and she is trustworthy. She is NOT someone you would expect to have mental troubles, but then many troubled people are not. Will she get over it or will her overly worried husband have her put into an insane asylum in Austin?

Story two is The Dearest of Friends, an uproariously funny tale about gossipy Vonnie and Mabel, six months later. Vonnie is distraught because her long time husband, Eddie, is cheating on her with a woman from Harrison. The efforts of the two women to identify the shameless hussy, and to put up with Mabel’s husband, dozing on an off in the easy chair, are hysterical.

The third story, Spring Dance, is heartbreaking. It is the story of a half dozen or so well-dressed people enjoying themselves at a spring dance in Austin. Then you find out they are patients at an insane asylum. They all seem fine, but then they start to forget how long they have been there, when their last visit home was and who their friends are. They have severe problems but you would never know it from their outward appearance. They ramble on about their past lives, Texas and when they will be released. As the play moves on, though, they become more and more disoriented. You like them, but you know that they should not be released, and mourn the fact that this is the 1920s and that ninety years later they would all be home and living decent lives on some sort of medication.

There is a soft, tender magic in all of the plays of Foote, one of the country’s most accomplished and gifted playwrights, a man whose plays will warm hearts a hundred years from now. His people, whether heroic or tragic, are rich in character and easy to embrace. And, as in the work of all good playwrights, they always seem to resemble someone you know today. That is certainly the case in Roads to Home.

There is a page long description of the places in the play that give the reader a fine view of turbulent Texas in the Roaring Twenties that adds a nice historical touch to the play. You learn a little about the oil industry, the economic boom and the flood of people from small towns to rapidly growing cities like Houston.

Director Michael Wilson has done an amazing job of recreating both Houston and Harrison, Texas, and some of the people who lived there. He has taken Foote’s narrative and turned it into a deep and mesmerizing set of one act stories. He gets powerful, emotional acting from six gifted actors who work hard to bring new life into 1920s Texas. Hallie Foote is the wide-eyed, talkative and always helpful, and always suspicious, Mabel. Her best friend Vonnie is play with gusto by Harriet Harris, who has to know everything about everybody. Rebecca Brooksher does a marvelous job as the soft and attractive Annie, who fears being tossed into the mental asylum. Her husband is played well by Dan Bittner and Devon Abner and Matt Sullivan provide fine work as the husbands of Mabel and Vonnie.

Roads to Home is a gauzy and loving look at life in Texas, in America, in the 1920s, a look behind the scenes in roaring Houston, a look at the sadness and volatility of the lives of a handful of people there, who could be struggling through life in any town, any state and in any year. It is a nostalgic and sensitive glance back at a state, and a country, post-World War I, bursting at the seams, the wild success of many overshadowing the tragedies of the few.