Review of Kenneth Robert Janken’s “The Wilmington Ten: Violence, Injustice, and the Rise of Black Politics in the 1970s”

Dr. John L. Godwin is an independent scholar, currently at work on a memoir of his years coming of age in the 1970s and his education in history. 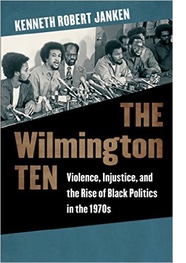 In recent months media accounts of violence between protesters and police in cities across the nation have brought disturbing reminders of a troubled history. A nationwide movement known as Black Lives Matter has emerged over the past two years, citing historic injustices and a new pattern of Jim Crow discrimination in America’s cities. Failures of government and failures of reform echo the refrain from the era of Richard Nixon and the Vietnam War when riots ran rampant and an embattled administration sought to stifle dissent and enforce the policy of an unpopular war. From this harried time in the state of North Carolina, Kenneth Janken, a UNC scholar of African American history, has published a book purporting to illuminate what may have been a more significant episode than historians have been willing to acknowledge.

The case of the Wilmington Ten, which grew from the 1972 trial of nine blacks and one white woman on charges of arson and conspiracy to fire weapons at police, along with subsequent appeals became a major enigma for the courts and the press in the 1970s. Citing recent instances at Ferguson, Missouri, and New York, Janken’s book guides the reader into the riddle of a proceeding that became infamous. Out of a tangled web of accusation and acrimony, through almost eight years of appeals, the courts eventually overturned the convictions and rebuked the prosecutor with an imputation of racism. Yet, The Wilmington Ten reminds us of the bewildering complexities of a record of some 6,000 pages that persisted through every level of state and federal courts.

Kenneth Janken is a skilled writer and a distinguished scholar in his field, and has managed to turn a new corner on this controversy. The story of violence in Wilmington—a raging revolutionary gun battle between protestors and police—is presented here in glaring detail. The role of the case in the shaping of black politics in the 1970s, added perspectives of the personal ordeal faced by individual members of the group, along with details of the opposition to Benjamin Chavis within the United Church of Christ that had sponsored him—these are some areas in which the book has much to offer. But for those who may have followed the arguments of 2012 in the campaign for the pardons of the Ten by Governor Beverly Perdue, Janken’s book will seem strangely to omit many details, to somehow shortchange the sheer perplexity of what had once so occupied the nation as to inspire accusations across the Atlantic, fueling Cold War declarations between President Jimmy Carter and Soviet leader Leonid Brezhnev, while drawing the endorsement of fifty-five members of the U.S. Congress for the Justice Department’s amicus curae brief on behalf of the defendants. Readers in search of what drove the controversy will find that it is amazingly brief on the particulars of the trial, as it is on the history of the African American community at Wilmington.

True, the book does provide plate reproductions of the handwritten trial notes of the prosecutor, James Stroud, released to the press almost forty years later during the campaign for pardons. Yet the assertions about these documents are largely the same as those heard already in the press, and there is little attempt to put these into the context of the 1972 proceeding or the prosecutorial practices of the time. Nor does the author manage to provide much insight into how the prosecution was able to obtain a conviction that was sustained in both federal and state courts on appeal until 1980. And the book ignores the witness Allen Hall’s double flip-flop statements at the 1978 Post Conviction Hearing and the obvious lies in the statements of recanting witnesses, while providing a one-sided look at the one of the trial’s central controversies: the so-called “amended statement” of Allen Hall, its admission into evidence and treatment by the Department of Justice and the 4th Circuit Court of Appeals.

In the absence of greater penetration in the study of the trial, the result is almost a déjà vu experience, a flashback to the provocative assertions of Michael Myerson, the CPUSA leader and member of the National Committee to Free the Wilmington Ten, who first told the story based on interviews with Ben Chavis in Nothing Could Be Finer (1978). Janken clearly embraces Myerson, yet there are subtle, unexplained differences in their accounts. One of the book’s primary contributions is its assertion that the case exerted a telling influence on black politics at a crucial moment through such groups as Amnesty International, the Greensboro CWP, the Maoist New Communist Movement, and the National Alliance Against Racism and Political Repression, providing a crucial stimulant toward radicalism that was much needed. Thus, when the courts overturned the convictions of the Ten it became a defining moment and a “great victory,” setting a precedent for the reform of criminal justice that set the country on the road to Ferguson, and by inference, Black Lives Matter.1 For some who are perhaps the true believers of the New Left, this argument may be persuasive. But the reader should be aware that Janken has left out major parts of the puzzle. The corrupt Nixon campaign of 1972, the election of Jesse Helms to the U.S. Senate, and later on the victory of Ronald Reagan and the new conservativism in 1980—according to some, these became major influences. It seems oddly myopic that this study does not pick up on the new conservative victories in North Carolina until recent times.2 And it is perhaps shocking that the book has nothing at all to say about the influence of Floyd McKissick, Sr., a key transition figure among North Carolina blacks, who worked for the Nixon administration and with whom Ben Chavis was well connected.

So it involves no stretch of the imagination to note that this provocative work is highly biased toward a group whose cause the author has chosen deliberately to champion. The claim on our sympathies on behalf of the Ten may be appropriate. But after more than forty years it is time to look for deeper explanations, recognizing the limits of a one-sided approach to a complex case rooted in the byzantine controversies of the Nixon era. For believers in the Russian Revolution, those who still reverence Mao and anticipate the return of Radical Reconstruction—this book will seem to capture a fleeting sense of that revolutionary moment waiting to happen. But for those who are interested in facts and want to know what really happened on the streets of Wilmington on the weekend of February 5-6, 1971, and the subsequent trial, The Wilmington Ten will surely raise new questions.

Why, for example, does the author find the story of the Ten as told by partisan supporters such as Myerson to be more credible than black police officers who participated in the prosecution? Can we really rely on sketchy handwritten notes by the prosecutor to make critical inferences about a prosecutor’s intentions in a trial of such complexity? What, after all, was said at the trial about the question of the prosecutor’s illness? Also, can we really assume that the role of federal agencies at Wilmington in the age of Nixon went no further than to stop Chavis and his supporters from protesting conditions in the schools? From another perspective, why was it that formerly all-black Williston Senior High school could be so important to black youth involved in the school boycott, yet at the same time comparatively less so to other black community figures who rejected the leadership of Ben Chavis? If the boycott really was crushed by police acting in concert with white nightriders, how can Janken cheerfully conclude that this armed struggle brought about a salutary shift in the “balance of power” in local affairs?

In spite of these and other such questions, it may be that the most important contribution of this book is to focus new attention on the events of that weekend in February when violence at Gregory Church made national headlines. For the story here is told with greater discernment than in the study by Meyerson. But in this regard the narrative by Janken raises an even more important question. Why has the author chosen to disregard the story of the mayor, Luther Cromartie, who maintained that on the night of February 6, 1971, the night that Mike’s Grocery was destroyed by fire due to arson, the Wilmington police in fact arrested a group of white vigilantes on their way to shoot it out with black militants?3 If true, the fact that the defenders of Gregory Church clearly jumped to the conclusion that the mayor acted in collusion with nightriders must therefore appear in a different light. Professor Janken’s sense of the relevance of N.C. vs. Chavis et al may then be more an expression of Bolshevik romance than perspicuous scrutiny of this controversial case. The Wilmington Ten ought to remind us as we read the headlines of violence in U.S. cities that in regard to such questions the public is still very much in the dark. While in North Carolina, once again, history has been left waiting at the bus stop when it ought to be already at the school house.