Review of Arkady Ostrovsky’s “The Invention of Russia: From Gorbachev’s Freedom to Putin’s War” 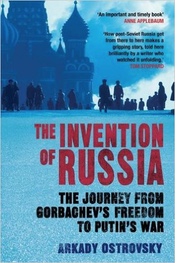 Mikhail Gorbachev’s attempt to reform the Soviet Union led to its disintegration in December 1991. The largest of its shattered pieces (15 new states in all) was Russia, which contained three-fourths of the former USSR’s territory and about half of its population. A state with the geographical boundaries of the new Russia had never existed before, and one of its major challenges, besides crafting a new economic and political system, was discovering a new national identity.

The Invention of Russia deals with this search. Its author, Arkady Ostrovsky, was born and educated in the USSR and left Russia in 1992 to pursue a PhD in English Literature at the University of Cambridge. During the present century of Vladimir Putin’s dominance in Ostrovsky’s birth land, he has been a foreign correspondent there for two British publications, the Financial Times and the Economist. Ostrovsky’s readable prose reflects his journalistic background, as well as his thorough knowledge of his native country.

In 1994, the Russian journal Rodina devoted three issues to the question “Russia—Who Are We?” In 1996, after being successfully reelected as president of Russia, Boris Yeltsin told staff members that it was time to find a new “national idea” and set up a committee to discover one, but it failed to reach any agreement. Also that year a government newspaper ran a contest offering a monetary prize for the best essay on “The Idea of Russia.” The winning entry claimed that as compared to Western Europeans, Russians valued their homeland, society, power, and glory more than materialism, individualism, freedom, and law. In 1997, the newspaper Kommersant wrote: “The search for a national ideology has become the Kremlin's idée fixe. This is understandable” (217). But by the time Yeltsin resigned at the end of 1999, a unifying ideology or identity was still far from being realized.

Ostrovsky suggests, but does not clearly lay out, Putin’s attempt to mold such a unifying vision. In the beginning, after assuming office as acting president when Yeltsin resigned, “Putin was clearly a statist, but he was free of any ideology” (265). Russia, he thought, “had its own core values: . . . patriotism, collectivism, derzhavnost—a tradition of being a great geopolitical state power that commands the attention of other countries—and gosudarstvennichestvo, the primacy of the state” (264). By 2012, when Putin began his third term as president, succeeding his protégé Dmitri Medvedev, who served from 2008 to 2012 while Putin was prime minister, he was pushing harder than ever “the traditionalist values of the state and the church,” combined with anti-Americanism. (312) Just as nineteenth-century Slavophiles and statists had insisted that Russia was in many ways different than the West, so too did Putin increasingly insist that Russia must follow its own unique path.

By 2013, Ostrovsky contends, “a new coalition emerged” between nationalists and Putin’s party (United Russia), the party of “crooks and thieves” in the words of one opposing politician. The Russian “annexation of Crimea [in 2014], performed by an extraordinary sleight of hand, cemented their union” (317). The author also makes clear that Putin realized how popular this move would be with the Russian people and, as expected, Putin’s approval ratings shot up.

Ostrovsky makes it clear that he does not view Putin favorably. Describing the Russian president and his Kremlin operation in 2003, the author states, “Money was the only ideology the Kremlin subscribed to.” It was driven by a “desire for personal enrichment, comforts and power” (306).

The Invention of Russia ends with a discussion of Russia’s involvement in the present ongoing war in Syria and with an assessment of Putin. He “has portrayed himself as a gather of Russian lands and restorer of the Russian empire. In fact, he is liable to go down in history as its gravedigger. . . . Putin offered war as an alternative to modernity and the future. The forces he awakened are [those] . . . of revisionism, chaos and war” (326).

Although neither Ostrovsky’s identifying post-Soviet Russia’s search for a new identity nor his negative assessment of Putin offers much new for Western readers, the Russian-born journalist’s insights into the role of Russian media, especially television, is enlightening. He describes in significant and interesting details how the media went from obtaining greater freedom under Gorbachev and Yeltsin, only to surrender much of it back to the state under Putin.

Illustrating the significance Ostrovsky believes television has had for Putin are the following words: “Television turned Putin, an unknown KGB operative, into Russia’s president within months of his eruption into the national consciousness. . . . Television has been the main tool of his power, his magic wand that substituted a counterfeit image for reality” (7). “Television has been the primary weapon in Putin’s ‘hybrid war’ against Ukraine” (8).

In the course of his narrative, Ostrovsky introduces us to many TV personalities, including some of the oligarchs like Boris Berezovsky and Vladimir Gusinsky, who once ran important networks, but were later outmaneuvered by Putin. But the individuals most admired by the author were principled critics of authoritarian post-Soviet developments, such as Alexander Yakovlev (1923-2005) and the liberal politician Boris Nemtsov, who was assassinated in 2015. The latter was one of the many personalities interviewed by the author, who writes, “I knew Nemtsov well— he was more than a journalistic contact. Of all the Russian politicians I kept in touch with, he was the only one I considered a friend. He was charismatic, determined, honest, unpretentious and very full of life” (1).

Toward the end of his book, Ostrovsky quotes him for the final time (in May 2014):

“I can’t remember such a level of general hatred as the one in Moscow today. . . . Aggression and cruelty are stoked by the television while the key definitions are coming from the slightly possessed Kremlin master. “National traitors,” “fifth column,” “fascist junta”—all these terms are coming from the same Kremlin office. . . . The Kremlin is cultivating and rewarding the lowest instincts in people, provoking hatred and fighting. People are set off against each other. This hell cannot end peacefully (321).

But it is not just Putin and the Kremlin that Ostrovsky blames for the present state of Russia. Many others share the blame from Russian capitalists to your average Ivan. Surveying Russian culture, he observes too much public admiration for nationalist heroes like the Soviet spy in the TV series Seventeen Moments of Spring–firstshown in 1973 but still admired in post-Soviet Russia—and Danila Bagrov, the violent anti-Chechen, anti-American hero of two Brother ( Brat)films. About the second of the two films, Ostrovsky writes, “After years of futile search for a national idea and common values, Brat 2 provided a simple and highly enticing answer: Russians are strong because they have truth behind them, while Americans are weak and hypocritical because they are all about money” (305).

Although The Invention of Russia does not present us as nuanced a portrait of Vladimir Putin as does Mr. Putin: Operative in the Kremlin (expanded ed., 2015), by Fiona Hill and Clifford Gaddy, it has its own unique strengths. The most important one is its depiction of the interrelationship of the Kremlin with the media during the last three decades.