Review of “Democracy for Realists” by Christopher Achen and Larry Bartels 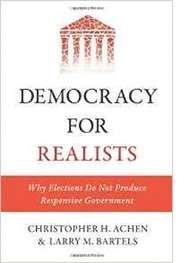 Christopher Achen and Larry Bartels are two of the leading political scientists studying voter ignorance and its effects. In Democracy for Realists, they offer a powerful challenge to popular assumptions about democracy. The authors take aim at what they call the “folk theory of democracy,” which posits that there is a coherent, reasonably well thought out will of the people that the voters express when they go to the polls. As they put it, “the ideal of popular sovereignty plays the same role in contemporary democratic ideology that the divine right of kings played in the monarchical era” (19).

Just as the rule of kings turned out to be badly flawed, the same – Achen and Bartels contend - is often true of the will of the people. They also challenge the theory of “retrospective voting,” which holds that even if voters don’t have a coherent ideological vision of politics, they can at least do a good job of evaluating incumbents’ performance and punishing them for failure. They assemble an impressively wide array of analysis and evidence against the folk theory and other relatively optimistic assessments of the electorate.

As Achen and Bartels show, the big problem with the folk theory and its offshoots is the phenomenon of widespread voter ignorance. Most of the public knows little about politics and public policy. As a result, they rarely have a coherent ideological vision of what they want, and tend to do a poor job of evaluating politicians’ performance in office.

Decades of survey data indicate that most voters have little political knowledge, often not knowing even such basics as the names of the three branches of government, and which officials are responsible for which issues. As Achen and Bartels point out, political knowledge has not increased significantly over the last several decades, despite major increases in educational levels, and in the availability of information, thanks to the internet and other new technologies.

Perhaps the most powerful part of Democracy for Realists is its critique of retrospective voting, a theory embraced by scholars who minimize the dangers of political ignorance. Advocates argue that even if voters know relatively little about politics, they can at least “throw the bastards out” when incumbents perform poorly, thereby incentivizing good performance. Voters do indeed often engage in retrospective voting. But, as Achen and Bartels demonstrate, their performance is far from impressive. The most common type of retrospective voting takes the form of rewarding or punishing incumbents for the performance of the economy. But, the authors show that most such voting is based just on trends in the economy in the last six months before an election – even though incumbents have little control over such short-term tendencies, which may be at odds with more important, longer-term trends on which their policies do have an effect. Instead of holding leaders accountable for their performance, economic retrospective voting often ends up being “little more than a high stakes game of musical chairs” (147). In addition, voters are often biased in their estimation of economic conditions, believing they are better than they actually are when the president of their party is in power, and worse when the opposing party holds the White House.

Achen and Bartels also show that the voters routinely reward and punish incumbents for a wide variety of other events that they have little control over, such as droughts and shark attacks, while neglecting issues over which leaders have greater influence (ch. 5). Often, retrospection is “blind” rather than discerning.

Blind retrospection may be a particularly serious menace during a major crisis, such as the Great Depression. In such situations, the authors explain, voters are often prone to support whatever party seems strongly opposed to the status quo, and likely to provide strong leadership – often without giving any careful consideration to its program, and the dangers they may pose. This dynamic played a major role in the rise of the Nazis during the Great Depression. Many Germans supported it on the basis of retrospective voting against the incumbent leaders of the Weimar Republic, even if they did not fully subscribe to the extreme nationalism and anti-Semitism of Hitler. The authors show that retrospective voting during the Depression massively benefited whichever party happened to be out of power at the time the Depression began, regardless of its ideology. Only in the case of the Nazis did this lead to a horrendous world-historical disaster. But it did nonetheless lead to some very harmful policies elsewhere, such as the massive cartelization of the economy adopted in the United States under the 1933 National Recovery Act, and the forcible restriction of agriculture production under the Agriculture Adjustment Act, for the purpose of raising food prices – at a time when millions were already struggling to pay for basic necessities. A more discerning electorate might have punished the incumbents without opening the door to dangerous political snake oil.

Retrospective voting might be an effective tool if the voters were well-informed. But it is extremely dubious when used by the largely ignorant electorate we have in the real world. Achen and Bartels’ book is the most comprehensive and persuasive critique of retrospective voting to date.

In addition to flawed retrospective voting, Achen and Bartels argue that real-world political alignments are often determined by identity politics. Examples include racial, ethnic, and religious affiliations. A candidate or party that seems to have an affinity for such a group can often secure its support regardless of the specific policies they promote. Partisan affiliation also often trumps policy or ideological preferences. People will often support policies advocated by their preferred party even if they differ from the party’s previous positions, and from the voters’ own self-described ideological commitments.

Achen and Bartels argue that historical episodes conventionally regarded as major ideological realignments were in reality a combination of identity politics and crude retrospective voting. That is their take on the 1930s, when the Democratic Party came to dominate American politics for over a generation, and the period after the 1960s, when blacks came to overwhelmingly support the Democrats, and white southerners shifted to the GOP.

In some cases, the authors may take their pessimism about voters too far. While retrospective voting is indeed badly flawed, it does enable voters to punish highly visible failures – an important advantage of democracy over dictatorship. This may be why democracies almost never experience mass famines within their own territory – a phenomenon common among authoritarian and totalitarian regimes. Even ignorant and illogical voters will tend to notice the famine, and blame incumbents for its occurrence.

Even if ideological change is not the cause of major partisan realignments, beneficial ideological shifts do sometimes occur. For example, it is hard to deny that the mid to late twentieth century saw a major shift towards greater support for racial equality to the point where traditional racism is no longer considered acceptable in polite society. More recently, there has been a similar transition toward greater tolerance for gays and lesbians.

Nonetheless, most of the Achen and Bartels’ negative depiction of voter competence is amply justified by the voluminous evidence they present. This creates an interesting dilemma: if voters make such poor decisions, why should we let them control so much of our economy and society? Currently, democratically elected governments spend 40% or more of GDP in most advanced nations, and regulate almost every form of human activity. Monitoring the enormous modern state is an extraordinarily difficult task for a generally ignorant electorate that often votes based on blind retrospection or crude identity politics.

Libertarian critics of voter ignorance such as Bryan Caplan and Jason Brennan, argue that the solution is to diminish the power of government, so as to reduce the potential harm caused by voter ignorance. This approach, however, is not open to Achen and Bartels, who generally support strong activist government, a position especially evident in Bartels’ previous work, such as his book Unequal Democracy.

One possible strategy for reconciling extensive government power with a pessimistic view of the electorate is to concentrate more power in the hands of experts, bureaucrats, or other knowledgeable elites insulated from the political process. But Achen and Bartels do not advocate this approach either, and certainly do not grapple with its potential flaws. Having challenged our faith in the divine right of the electorate, they seem content to let it retain most, if not all, of its power.

Despite such caveats, Democracy for Realists is essential reading for anyone interested in the problem of voter ignorance, and the future of democracy more generally. It illuminates a dangerous problem that may well bedevil democracy for a long time to come.