‘To Be or Not to Be’: Shakespeare First Edition Book Goes on Tour 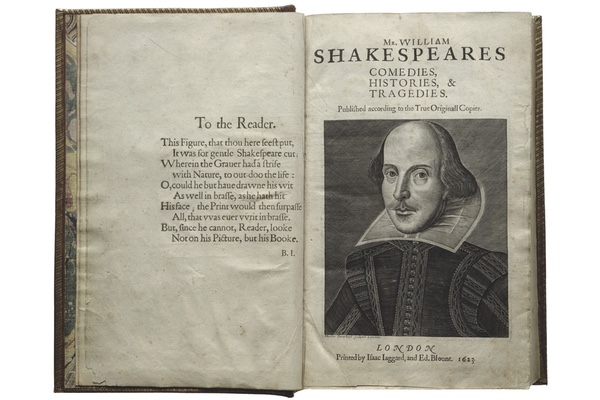 There are just 750 copies of the First Folio, the first edition of the plays (36 in it) of William Shakespeare. Valuable? When they were printed way back in 1623 they were such hot items that local London publishers were getting $230 in today’s money for each copy. 234 of them are owned by collectors and 82 by the Folger Shakespeare Library in Washington, D.C.

The First Folios are big, 960 page books with thick, heavy covers and they are pristine. Want to see one? The New-York Historical Society, W. 77th Street at Central Park West, has an enthralling exhibit, First Folio: the Book that Gave Us Shakespeare, on tour from the Folger Shakespeare Library, on loan from the Folger, is on display through July 31 and then heads off for a national tour with stops in all 50 states, Washington, D.C. and Puerto Rico (the Cincinnati Museum Center and the American Literary Association are co-sponsors). The pages of it are opened to the most famous speech in literary history, Hamlet’s fabled “to be or not to be” monologue. The paper on which the speech in printed is thick and rich and the “to be” speech, in black ink, leaps off the page at you.

The New-York Historical Society has it protected in a thick plastic case and the entire area is monitored by security police and cameras.

The exhibit is a small one, but interesting. You learn a lot about Shakespeare’s play and the movies made from them, too. There are huge boards with photos of dozens of actors who have played Shakespearean roles, advertising posters form the late nineteenth century, a 1773 hand-written list of stops on a tour of a Shakespeare play in America and a broadside of Hamlet starring Edwin Adams, one of the nineteenth century’s top actors. plus an 1898 diary of Gertrude Kellogg’s visit to a rehearsal of a play and a play poster of a Shakespearean production in East Lynne, Connecticut,

The Folio exhibit is just one of many around the U.S. that marks the 400th anniversary of the death of the Bard.

The best thing about the exhibit is not the folio itself, or the posters, but the special events that the Society is sponsoring to celebrate the folio and Shakespeare.

The Historical Society is happy to host the traveling Folio. “Shakespeare’s eloquent language has helped shape generations of America’s greatest thinkers, particularly Abraham Lincoln, who cited the Bard as his favorite author,” said Dr. Louise Mirrer, President of the Society. “As an institution dedicated to the study American history, told through the prism of New York, we’re honored that the New-York Historical Society will be the sole venue in New York State for visitors to experience the First Folio for themselves. We hope to offer a deeper understanding of Shakespeare, his influence on American history, and a keen awareness of the evolution of his work.”

On June 2, different actors recited monologues from Shakespeare’s works that were favorites of President Lincoln.

On June 11, a kid’s day, many children were given a behind the scenes look at the exhibit, the First Folio and other historical documents. That same day the Frog & Peach theater Company staged a scene from a Shakespeare play.

On June 26, U.S. Senator Kirsten Gillibrand, Folger Library Director Michael Witmore and a team of actors discussed the influence of Shakespeare and the women in his works on their own lives in “Heroes and Heroines: Women in Shakespeare and Lesson’s for Today’s Leaders.”

Throughout the month of June, the 92d Street YMCA sponsored a series of analysis of several Shakespearean plays.

Perhaps the most interesting part of the exhibit is a huge poster on which are printed many of the world famous sayings and quotes from Shakespeare’s plays: “The game is afoot,” “as merry as the day is long,” “bated breath,” “the be-all and the end-all,” ”neither a borrower or a lender be,” “break the ice,” ”brevity is the soul of wit,” ”cold comfort,” ”dead as a doornail,” ”let slip the dogs of war,” ”eaten me t of house and home,” ”fancy free,” ”forever and a day,” ”for goodness’ sake, ”full circle,” “good riddance,” ”kill with kindness,” and “heart of gold.”