Culture Watch
tags: theater reviews, Shakespeare, Much Ado about Nothing 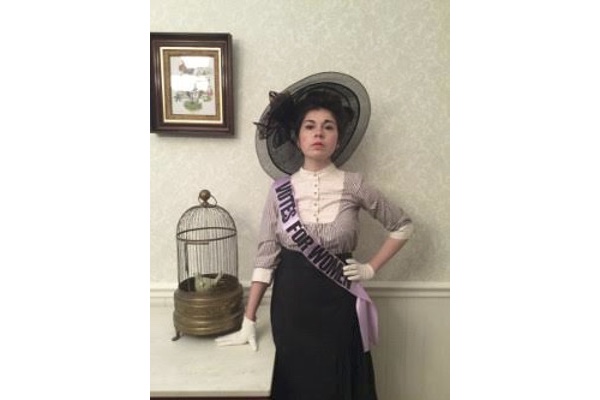 New York’s Bryant Park at the start of summer is a wonderland. There are food kiosks, a bakery, an outdoor restaurant on the west side of the park and an indoor restaurant on the east side. Women holding hands with their man push baby strollers beneath hundreds of leafy trees. Young people sunbath on the large, green rectangular lawn, families have lunch at hundreds of small green tables, tourists with water bottles tightly in their hands lounge on long thin benches, people play chess and checkers, hundreds of meticulously clipped green bushes sit in wooden boxes and a huge, handsome fountain spews out thousands of gallons of water each day. Clouds lazily drift by overhead

In the middle of all of this runs a very worried looking Beatrice, a character in William Shakespeare’s Much Ado about Nothing, written in 1600, dressed in a flashy post World War I black gown, a troupe of Suffragettes right behind her hoisting a huge ‘Let Women Vote’ banner.

They are part of the Drilling Company, which produced the play, now running in the park as part of Bryant Park Presents, a summer theater series. Director Hamilton Clancy decided to turn the much produced Shakespearean work into an historical story, with characters living just after World War I and just before women received the vote in the U.S. in 1919. He said he wanted to showcase the role of Beatrice, a powerful and engaging woman. Women wear period dresses and men have on period suits. Some of the men are dressed as World War I soldiers. You hear 1920s era music throughout the show. They play is staged just as Shakespeare wrote it, but the post World War I setting gives it an American feel and increases people’s interest in history.

The drawback of Much Ado about Nothing, critics have charged for years, is that the play tells you very little about the history of Italy around 1600, when Shakespeare wrote the play. This World War I version at Bryant Park does and makes the play historically pretty interesting.

The story is simple. Two men are trying to fool two women as to their identities. Beatrice and Benedict are rumbling through the play, trying to find each other. Claudio and Hero love each other and plan to marry, but at the wedding it is revealed, by several witnesses, that Hero bedded down with some strange man the night before the ceremony. Did she or didn’t she?

In the end, will Benedict and Beatrice wed after two hours of merry chases through Messina, Sicily, where the play took place? Will Benedict, or any man, survive the scalding wit of young and sassy Beatrice? Will all the old men in the story ever understand the young people, then or now?

Much Ado about Nothing has no actual sets, yet is a superbly staged play. Director Clancy has done a fine job of integrating America of 1919 or so into Italy of 1600. He has his actors strutting across the stage and running through the audience. He sets a brisk pace for the comedy, that remains entertaining from start to finish. Clancy gets stellar work from Anwen Darcy as the pretty, self-assured and combative Beatrice. Other fine work is from Mary Linehan as Hero, McKey Carpenter as Benedict, Andrew Gombas as Claudio, Jarrod Bates as Verges. The rest of the ensemble cast for the show does sturdy work.

The show’s history does gets a bit mixed up. The audience is told that the play is set in Messina and yet, with the suffragettes, it appears to be staged in the U.S. Oh, well, we’ll give the Drilling Company a little literary license there. There was also no military action in Sicily in World War I, a conflict entered into by the Italian government on the side of the allies. The fighting in Italy was in the northern mountainous area. Sicily was an important stage for World War II, however.

The outdoor stage is set up so that several hundred people can easily be accommodated and yet the play itself seems far removed from all the other activity of the park. The park is not overly large, but large enough so that the noise in it cannot be heard in the theater area. The Drilling Company also employs a great sound system so that members of the audience can hear the performers clearly no matter where you sit.

This is the third summer season in Bryant Park for the Drilling Company, and the park estimates that nearly 20,000 people have seen plays there. After Much Ado closes next weekend, the Drilling Company will stage As You Like It July 21-23 and Measure for Measure September 1-18 in Bryant.

Outdoor park theaters, movies and concerts are one of the joys of American life in the summertime. There is nothing like carrying some chairs, blankets and picnic baskets full of food and drink from the car to the park and sitting down, leaning back and watching a play as the summer wind drifts through the treetops.

There are outdoor summer theaters everywhere – some free. In California, there are outdoor stages in Golden Gate National Recreation Area, managed by the We Players, the Shakespeare Theater in Los Gatos and the Shakespeare Theater in Santa Cruz. Chicago has the Starlight Theater at Wallace Bowl in Wilmette, Illinois and another in Oak Park. Washington, D.C. has the Carter Barron Theater. There are hundreds more from coast to coast.

Needless to say, there are weather problems with outdoor theater, movies or concerts in any park in any state. It can rain and that wrecks any well-planned day. The weather can get oppressively hot, as it did Sunday when I caught Much Ado about Nothing at Bryant Park. You can arrive late and find terrible seating, or no seating, due to unexpected crowds. You might encounter bugs, an army of squirrels or a larger army of noisy children. It is worth the trip, though, because these outdoor theaters give you three acts of drama and a fourth and very long act of summer fun.

PRODUCTION FOR MUCH ADO ABOUT NOTHING: Sets: Jennifer Varabalow, Costumes: Laurie Dick, Lighting: Tyler Learned, Sound: Anna Grossman. The play is directed by Hamilton Clancy. It runs through June 4.