Review of Dov Waxman's "Trouble in the Tribe: The American Jewish Conflict Over Israel" 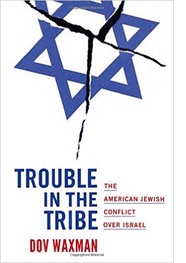 Dov Waxman's Trouble in the Tribe is a fair and thorough account of a growing schism between American Jews who refuse to remain silent about Israeli policies they find objectionable and the well-known Israel Lobby. Waxman, who teaches political science, international relations and Israel studies at Northeastern University, offers a reliable definition of the Israel Lobby, which has designated itself as "pro-Israel," implying that its critics are anti-Israel. Its permanent members include the formidable AIPAC, the Conference of Presidents of Major American Jewish Organizations, the Zionist 0rganization of America, the Anti-Defamation League, and assorted miniscule clusters. It also comprises the hawkish, secular, and mainly Jewish neoconservatives, Christian Zionists, and politicians in both parties eager for Jewish money and votes. "Only those groups and individuals that endorse Israel as a Jewish and democratic state are allowed within the communal tent--something that senior officers within the organized Jewish community have publicly stated," writes Waxman. For them, there is an inflexible "red line," ostracizing and attacking anyone who paints Israel as racist, colonialist or apartheid. Interestingly, a new off-off Broadway play, "The Forbidden Conversation," explores the growing divide, which the playwright Gili Getz says deals with "the difficulty of having a conversation about Israel in the American Jewish community."

The late Rabbi Arthur Hertzberg, an historian of Zionism, understood precisely what was happening when he shrewdly pointed out in 1990 that American Jewry was "an organized and aging half moving right and a younger, more liberal group increasingly abandoning Jewish organizations." As Waxman writes, "the era of uncritical American Jewish support for Israel--'of Israel right or wrong'-- is now long past" while the relatively new situation "is driven not only by changes in Israel and in the Israeli-Palestinian conflict (as media reports often suggest), but also by changes within the American Jewish community itself." Assimilation, secularism, emphasis on the Jewish prophetic tradition, as well as concerns about Israel and its occupation of the Palestinian West Bank and its ever -expanding settlements have led many American Jews to seriously question and reject their older generation's routine veneration for Israel.

Much earlier, my immigrant family, at least those who survived the mass murder of Jews during the post-WWI Russian civil war and WWII's Nazi invasion of Russia, fervently supported the emergence of a Jewish country promising democracy and freedom and security for Jews. I, too, was thrilled, dancing the Hora with friends on the Staten Island Ferry on May 14, 1948, the day the State of Israel was proclaimed. And when Israel's military badly defeated Arab armies it deeply affected millions of proud American Jews. After the victorious Six Day War in 1967, I saw posters hanging in local stores depicting General Moshe Dayan dressed in a Superman costume. When PM Netanyahu preaches about "existential" dangers facing Israel and reminding everyone that Israel resides in a very perilous region he is drawing on endemic fears of renewed anti-Semitic attacks. In truth, though, most American Jews were never Zionists, as Jack Ross's searching Rabbi Outcast: Elmer Berger and American Jewish Anti-Zionism makes clear. They were instead New Dealers, communists, socialists, Territorializes, Bundists, conservatives, and classical Reform Jews and their rabbis. But when they learned about the Mengeles, Eichmanns, Babi Yars, the murder of one and a half million children, Zyklon B, and that no messiahs, real or spiritual, had arrived to rescue them, it changed everything. For American Jewry after the Holocaust, Israel became synonymous with hope, redemption, security and intense loyalty, hence the founding of AIPAC to defend its interests in Washington.

Yet there always were dissenting Zionist voices, though generally ignored. In 1891, Ahad Ha'am (Asher Ginsberg) the pre-Israel Zionist and Hebrew essayist visited Palestine and wisely cautioned early Jewish settlers that a revival of a Jewish nation was advisable and worthwhile only if the Jews did not behave as other xenophobic nationalists had and treated local Arabs as less than human. During the thirties the philosopher Martin Buber and the pacifist Rabbi Judah Magnes, the Hebrew University's first Chancellor and later President, and other Israeli Zionists formed short-lived groups in favor of forming a bi-national state of Arabs and Jews. Today, small Israeli groups such as Gush Shalom, support a viable Palestinian state alongside Israel, but grow smaller and less influential with each passing year as the Israeli government turns further right.

Peter Beinart, an American Jewish liberal Zionist, reflected the growing disquiet about Israel and the organized American Jewish establishment in his book, The Crisis of Zionism, and other writings. He complained that American Jewish organizations had abandoned its traditional support for working people, minorities, and civil liberties on behalf of defending Israel from those supposedly intent on "delegitimization--a vague and pet word in the Israel Lobby's vocabulary. Most shockingly, and truthfully, Beinart told his fellow Jews they need "to accept that in both America and Israel we live in an age not of Jewish weakness, but of Jewish power, and that without moral vigilance, Jews will abuse power just as hideously as anyone else." Waxman rightly wonders if Beinart inflated the number of alienated American Jews from Israel, but he's smart enough to point out that no-one in the Israel Lobby has effectively challenged Beinart's portrayal of the "American Jewish Establishment, particularly groups like the Conference of Presidents, AIPAC, and the ADL as merely a mouthpiece of Israeli governments, and acting like 'intellectual bodyguards for Israeli leaders who threaten the very liberal values they profess to admire.'"

A classic example of the continuing struggle in the U.S. can be dated to 1973 when Bob Loeb founded Breira ("Alternatives"), which called for recognition of Palestinian statehood, or what is now more commonly called the two-state solution. This was heresy to a community and its guardians which had rarely criticized Israel. Breira was bitterly assailed as "pro-PLO" and its members as "self-hating Jews." It reluctantly disbanded in 1977. In recent years the struggle has often centered on college campuses with fights over BDS (the Boycott, Divestment and Sanctions movement) and Israel. Claiming that Jewish students are suffering from anti-Semitism today, AMCHA Initiative, one of several such groups supportive of Israel, has also published a list of more than 200 "Anti-Israel Middle East Studies Professors" in U.S. colleges and universities it considers biased against Israel for having signed a petition "to boycott Israeli academic institutions." A few of the signers had Jewish surnames.

Jeremy Ben-Ami, founder of the opposition center-left J Street (which also claims to be "pro-Israel" but "pro-peace"too) is quoted by Waxman describing the crackdown on Jewish dissidents, "All across the country rabbis, Hillel directors, and other organizational leaders are forced to consider whether they can or want to deal with the headaches, slander and vitriol, from conservative voices in their community before they think of giving a platform to views outside the party line." Waxman illustrates the absurdity of the censorship in writing about "the performance of a feminist punk rock group at a music festival organized by the Washington, DC, JCC (Jewish Community Center] which was cancelled because its lead singer was critical of Zionism." To all this, the novelist Anne Roiphe memorably reminded her fellow Jews (in a magazine I once edited) that, "Not since Holland's Jews read Spinoza out of the people, have Jews so quickly drawn lines of who is acceptable and who is outside, and used those lines one against another."

The backing for every Israeli action and policy may be eroding if one is to judge by two recent confessional articles by former leaders of organized Jewry written after the publication of Waxman's book. Writing in the [NY] Jewish Week, the nation's largest Jewish interest newspaper, Seymour Reich, a onetime chair of the Conference of Presidents of Major American Jewish Organizations, condemned Israel's "assault on democratic values and its use and support of legislation and incitement to strike down dissent. Speech, press, religion and academic freedoms are under relentless attack and are being eroded .... The same damage is being inflicted by Israel's policies regarding Palestinians." And David Gordis, president emeritus of Hebrew College and Professor of Rabbinics and former head of the American Jewish Committee, pointed out in the Jewish magazine Tikkun that Israel has "subordinated" Judaism's values to its "cruel and oppressive occupation, an emphatic materialism, severe inequalities rivaling the worst in the Western world and distorted by a fanatic, obscurantist and fundamentalist religion," concluding, "So, sadly after a life and career devoted to the Jewish Community and Israel, I conclude that in every important way Israel has failed to realize its promise for me. A noble experiment, but a failure."

Trouble in the Tribe is a valuable road map to an ongoing and very important conflict.