Review of "The Pew and the Picket Line: Christianity and the American Working Class" edited by Christopher D. Cantwell, Heath W. Carter, and Janine Giordano Drake

Books
tags: book review, The Pew and the Picket Line 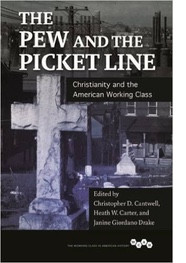 In Democracy in America, French social philosopher Alexis deTocqueville commented that “the first thing” that caught his attention on his recent visit to the United States was its “religious aspect,” from which “great political consequences” had ensued. Christopher D. Cantwell, Heath W. Carter, and Janine Giordano Drake, the editors of The Pew and the Picket Line,” find a similar impact on American labor. They contend that until 1966, when historian Herbert Gutman raised the issue, “most labor historians” had neglected the close relationship between religion and the American working class.

Inspired by this critique, Cantwell, Carter, and Drake have compiled a collection of essays that are “intentional forays into spaces general scholars have long circumnavigated.” By adding working-class history to religious history, they aim to reveal “where the contours of both American Christianity [the majority faith in the United States] and American Capitalism have been shared and reshaped.” Rather than produce a final, master synthesis to explain the relationship, the volume’s excellent introduction and nine distinct essays serve to demonstrate the intimacy and diversity of marriages between labor and religion and the need for further exploration in that direction.

In “Manufacturing Christianity,” the first of the book’s two parts, there are five essays that cover ground from nineteenth-century Philadelphia to twentieth-century Cairo, Illinois. Dan McKanan reveals how nineteenth century labor authors George Lippard and Ignatius Donnelly in separate novels conjured up “esoteric Christianity as a source of worker empowerment,” using creative anti-Catholicism, anti-Masonry, and anti-Semitism to identify and vilify alleged sources of social evil. On the other hand, Evelyn Sterne describes the importance of the Roman Catholic Church to working-class communities in nineteenth and twentieth century Providence, Rhode Island. “Religion mattered” to the Catholic laity of that city in their desire for “better working conditions and electoral access.” According to Jared Roll, metal miners in the early twentieth century embraced capitalism and Pentecostalism. Located in the Joplin district, a six hundred mile wide section of Kansas, Missouri, and Indian Territory, the miners flocked to the faith healing preacher Charles Fox Parham. Less successfully, as Matthew Pehl relates, in the 1950s an organization of white Protestant ministers known as the Detroit Industrial Mission (DIM) sought to bring religion to Detroit autoworkers. Unappreciative of the diversity of the workforce, which included Southern Protestants, Catholics, and African Americans, the DIM found its efforts at inclusion thwarted by cultural as well as spiritual differences. Finally, in Part I, Kerry L. Pimblott discusses the fight for civil rights in Cairo, Illinois. Religion was central to this struggle, which involved a shift from traditional nonviolence to a less passive approach. As the 1960s ended, in a mainly black, economically devastated city, African American theology with an emphasis on redemption and exodus gave way to Black Power theology as espoused by “the United Front, an ecumenical citywide Black Power coalition.” Forging a “mass movement,” the United Front led by the Reverend Charles Koen channeled “Christian energy toward the problems of American cities.” Regardless of their particular locale, the primary figures in these essays in Part I, whether or not they were successful, linked the working class to Christianity and thus became part of its history.

Though Part II, “Christianizing Capitalism” arguably serves a similar purpose, the editors contend that the book’s “essays . . . explore ways that working-class believers shaped the contours of industrial capitalism.” Arlene Sanchez Walsh discusses the role of religious eclecticism in a 1938 strike by pecan shellers in San Antonio, Texas. Erik Gellman and Arlene Collis Greene examine an attempt by “a multiracial group of nine college and divinity students representing the Fellowship of Southern Churchmen” to establish a model interracial farming cooperative in North Carolina following the Second World War. After an invasion by “a moonlit mob of three hundred men,” the students were compelled to leave the area. Regrettably, the Fellowship’s rejection of Jim Crow was thwarted by other white Southern church people. As Brett Hendrickson demonstrates, the attitude of the Catholic clergy to migrant Mexican workers in the “bracero program” from 1942 to 1964 was positive. Unlike Catholic laymen, and relying on the social teaching of their church, priests supported Cesar Chavez and the United Farm Workers (UFW) in their efforts to organize the often abused migrants. Sympathetic white clergymen were also present in Chicago during the 1960s. As Erik Gellman writes in the book’s final essay, they supported Chicago’s Urban Training Center for Christian Mission (UTC), which was founded in 1963 and aimed at “channeling Christian energy toward the problems of American cities.”

With this diverse collection of essays, Cantwell, Carter, and Drake admirably succeed in merging the histories of religion and the working class. Without exception the work is sharply focused and impeccably researched. What remains is for additional scholarship to make the merger as complete as possible by providing additional evidence.