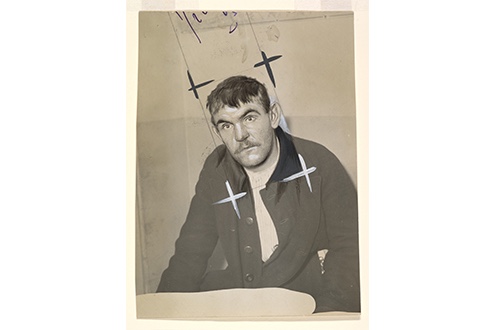 Hidden within the gigantic Metropolitan Museum of Art in New York is “Crime Stories: Photography and Foul Play,” a new exhibit on criminals and pictures since the 1850s, the start of the infamous photo ‘Rogues’ Gallery’ era. It has some sensational historic shots, such as the men hung for assassinating President Abraham Lincoln, some truly macabre shots, such as slain gangster John Dillinger’s feet, news photos, such as billionaire heiress Patty Hearst wielding a machine gun as part of a robbery team for the Symbionese Liberation Army in 1974 and the murder of Lee Harvey Oswald by Jack Ruby in 1963.

There are chilling portraits of killers, both young and old,  hundreds of mug shots, photographic studies of bad guys’ chins and noses, copies of old crime magazines and photos of guns galore. But there is no connection between any of the pictures, no story line, no theme. It is as aimless as if Al Capone fired a rifle into the air, not knowing where the bullet would come down.

The exhibit, which opened in early March, is also too small and tucked into a small pair of rooms in the Gilman Gallery off the sculpture gallery. There are no really large photos and yet some of these events are the biggest in U.S. history, such as the murders of Lincoln and Jack and Bobby Kennedy. There is a startling photo of Bobby Kennedy trying to raise his head and open his eyes as he lays on the ground, bloodied, and a second photo of killer Sirhan Sirhan’s .22 caliber revolver, but they are so small you can hardly recognize them.

Don’t get me wrong. There are a number of powerful components of the exhibit that people will enjoy. As an example, you learn all you want to know about mug shots, those photographic staples of American police work and television crime drama. There are dozens of them. There are mug shots from the Chicago police department from 1936 to 1946 and an even bigger display of mug shots of French political activists from the 1890s. Earlier, Sam Szabo took photos of hundreds of criminals in the U.S. for the original ‘Rogues’ Gallery.’ These were photos of arrested men that were kept on file and in special books, so that police could use them to identify killers and robbers in later cases. There were hundreds of thousands of these in America in the early years of the 20th century.

One little secret that you discover in the exhibit is that police routinely touched up mug shots and file photos that were used in newspapers and magazines to make the criminals look more sinister.

There is a detailed photo of the parts of men’s faces taken by Alphonse Bertillion. For years, the size of people’s body and facial parts were used to convict them of crimes – until the entire process was debunked as just plain ridiculous.

There are a number of photos by famed New York crime photographer Arthur Fellig, the famous “Weegee,”  including shots of police chalk outlines of dead bodies, bullet holes in walls and a cop holding a head in a cardboard box in the famous “cake box
murder.”

There is a striking shot of a woman holding a gun on the screen of a Times Square movie theater by famed photographer Diane Arbus. Fabled photographer Richard Avedon, too, has a photo in the exhibit.

And, of course, the museum has several photos taken of killer Ruth Snyder at the exact moment she was executed in the electric chair at Sing Sing Prison in 1928 – taken by a reporter wearing a concealed camera on his leg.  There are several photographs of prisoners, some behind bars as in film posters. There is a modest looking 12 year old kid who murdered his two sisters, the rather innocent looking Dick Hickock, one of the two killers of the Clutter family made famous in Truman Capote’s book In Cold Blood.

All of these really neat pictures get lost in the disorganized exhibit, though. Also lost is the point the curators try to make that all of these photos covering 166 years of crime laid the foundation for black and white crime movies. It's just not proven. If they could have added a half dozen or so good, huge  crime movie posters, or movie stills of James Cagney in Public Enemy, or Edward G. Robinson (pick any movie) it would have helped, too. They did not, though.

It’s like reaching for your gun and pulling a flower out of your holster or like firing a lot of blanks.

The exhibit continues through to July 31, the middle of summer.

And you know what the police routinely called the summer? The killing season….