Review of Larry Cuban's "Teaching History Then and Now: A Story of Stability and Change in Schools"

Luther Spoehr is a Senior Lecturer in the Education Department at Brown University. 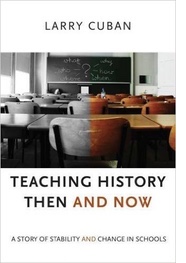 Here’s how I started my 2013 review of Larry Cuban’s Inside the Black Box of Classroom Practice:  Change Without Reform in American Education:  “Larry Cuban has been a voice of reason during the past thirty years of stormy debates over school reform.   A former high school teacher, district superintendent, and now professor emeritus of education at Stanford University, he takes quantitative data into account without being hypnotized by it, doesn’t tie himself into knots with pedagogical ideology, and never confuses policy with practice.”

Well, Larry Cuban is back, and I’m happy to report that he has lost nothing off his fastball.  Teaching History Then and Now:  A Story of Stability and Change in Schools is a worthy successor to his invaluable books on how teachers taught, and how little has changed despite the waves of fads and reforms that have periodically washed over America’s schools for the past century.  Cuban’s research is still clear-eyed, careful, and comprehensive; his conclusions, nuanced and precise.  What is new and welcome is that here he focuses on his own discipline and writes a memoir-with-case-studies of how history has been taught over the past six decades.

The question he sets out to answer is characteristically straightforward:  “What has changed and what has remained the same in the content and pedagogy of high school history over the past half-century?”  To answer it, he uses his own experiences, first as a fledgling teacher in Glenville, Ohio, on the East Side of Cleveland, from 1956 to 1963, and then at Cardozo High School in Washington, DC, from 1963 to 1967.  Almost all of his students at both schools were black.  And when, over 50 years later, he goes back to visit history classrooms and see how history is taught, the only real demographic change is that about one-third of the students at Cardozo are Hispanic.  So one thing that hasn’t changed is de facto segregation.

Cuban is aware that experience can alter one’s perspective, and memory can be unreliable.  He quotes Cormac McCarthy (“You forget what you want to remember and remember what you want to forget” and Mark Twain (“It isn’t so astonishing, the number of things that I can remember, as the number of things I can remember that aren’t so”).  But he also has documents—materials from his teaching days, both statistical and qualitative information that helps to establish the “macro-context” of the schools where he taught, and even some interviews—that provide a solid foundation for his study of his early years in the classroom.  And his research reflexes are still sharp when observing classrooms today.

Back in the 1950s, in his own classroom, Cuban quickly tired of the constraints imposed by textbooks, so he began to put together his own materials, including primary sources on black history, to try to engage his students further.  He was still too “teacher-centered,” in his own estimation, but it was a step in the right direction.  Soon he was caught up in the “New Social Studies,” with its emphasis on “inquiry,” “discovery,” and the “inductive method,” pioneered by Edwin Fenton, Richard Brown, and others.  In 1963, Cuban moved on to Cardozo High School in Washington, where he not only taught history but also mentored young teachers who were part of the Peace Corps Project in Urban Teaching (shades of Teach for America) and gained additional insights into how history was commonly taught and how difficult it was to teach it well.  Just as important, he says, he “learned that schools are not independent entities floating over neighborhoods and social networks….I learned that reform ideas, talk, and organizational changes…may not reach inside classrooms once teachers close their doors and begin teaching.”

Halfway through the book, before moving on to contemporary Glenville and Cardozo, Cuban steps back and looks at the many attempts made to improve history curriculum and pedagogy over the past 100 years.  Throughout, he finds tension between those wanting to teach history as “heritage” and reformers wanting to teach it “historically.”  From the 1916 report from the NEA’s Committee on Social Studies, through the New Social Studies (NSS) of the 1960s, to the “History Wars” of the 1990s and what he calls the “New, New History” today, conflicts over teaching history, along with similar and often simultaneous battles over teaching other subjects, have been “dramas of popular beliefs and societal traditions about which knowledge is most important for students to study.”   But while dramatic, these struggles did not really lead to widespread, permanent change.  The curricular materials and approaches designed for the New Social Studies, for instance, never penetrated more than about 20 percent of history classrooms.  And by the late 1970s, it was almost as if they had never been tried at all.

One problem was that the NSS was aimed only at high-performing students, often in Advanced Placement History classes.  Cuban thinks (or at least hopes) that by developing materials for all students and taking advantage of internet access, some recent reforms, such as Sam Wineburg’s Stanford History Education Group (SHEG)  can at least avoid that pitfall.  Over two million visitors have downloaded lessons from SHEG’s “Reading Like A Historian” project since the project’s inception in 2009.  His visits to history classes at Glenville and Cardozo, and the other evidence he examines, however, temper his optimism.  The “historic pattern” is still typical: “teacher-centered instruction [with] lecture, whole group discussion, small-group work, reliance on the textbook and worksheets, homework, and tests.”  Old habits die hard.

Overall, it’s safe to say that Cuban finds more stability than change in the teaching of history.  Although we know more about what it means to “think historically” than we ever have, implementing those insights for all students, even with the advantages conferred by technology like the internet, is a herculean task.   Meanwhile, the “grammar of schooling”—including age-based grades, precisely-gauges class times (usually 45-50 minutes), subject-based courses taught in self-contained classrooms—has remained essentially unchanged for a long, long time.  Teachers teach as they do partly because it’s how they’ve always taught, partly because their environment gives them few obvious alternatives.  Moreover, Cuban says, policymakers have “conflate[ed] two separate problems—academically low-performing urban schools and soft spots in the U.S. economy—that [they] attribute to one problem:  broken US schools.  That unexamined fusion of two distinct problems has been a policy virus that has infected school reforms in governance, organization, curriculum, and instruction over the past thirty years.”  And until teachers themselves have a stronger voice in policy-making, that problem won’t be solved.

A final obstacle blocking improvement of history teaching is the ongoing pedagogical insistence that skills and content are separate and distinct—and that the former matter most.  On the contrary, Cuban says, the two are “inseparable.”  Yet you wouldn’t know it from the most conversations about what to teach and how to teach.  (Although Cuban doesn’t cite him, the cognitive psychologist Daniel Willingham has been making this point for years.)

Nevertheless, despite watching years of inertia, Cuban remains somewhat hopeful.  Perhaps the Common Core, which emphasizes reading nonfiction, will actually lead to more attention being paid to history, after its years in the wilderness under No Child Left Behind.  Perhaps the “New, New History” will be able to extend its reach beyond the 20-25 percent of teachers who might actually practice some of its methods.  It might be done:  Cuban points out that the SHEG has “explicitly developed lessons—tinkering with the language of primary sources to help English Language Learners and students whose reading skills are limited—that can be taught” within the confines and limitations of the standard “grammar of schooling.”

Being a worrier, I bring other concerns to the table.  What if the long internecine war between history and social studies (the latter has it own priorities, “historical thinking” and understanding change-over-time not always among them) resumes as the curriculum is allowed to expand under Common Core?  How are we going to upgrade not only the skills but also the content knowledge of history teachers?  More than any other subject (except, possibly, physics), history is taught by teachers who neither majored nor minored in it.  I can’t quite get past my memory of observing a history teacher (in an AP course, no less) who went on at length about the “Lincoln-Buchanan election.”

All of this may simply confirm Ted Sizer’s observation that history is the most difficult subject to teach well.  But, in any case, I don’t want to extinguish the sliver of light that Larry Cuban sees at the end of the proverbial tunnel.  He has been right about many things, including the fact that after more than a decade of wrangling over NCLB and then the Common Core, over charter schools and schools-within-a-school, vouchers and standardized testing and “accountability,” school reform has become “a theater of political expression.”  If the curtain ever comes down on that show, we might be able to focus on the essentials that, over the years, Larry Cuban has pointed out so well.