What's the Matter with Liberalism?

Mike O’Connor is a history adjunct in Georgia and author of A Commercial Republic: America’s Enduring Debate over Democratic Capitalism. He blogs at the website eight hundred words. 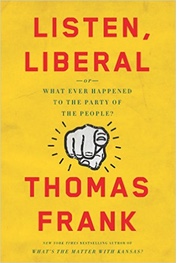 New York Times columnist Timothy Egan recently wrote that Bernie Sanders’s campaign for the Democratic presidential nomination has made “the word socialist…no longer toxic in the United States.” Perhaps ironically, the same cannot be said for the word liberal. For decades now, conservatives have gotten political mileage out of characterizing liberals as latté-sipping fops who despise religion and the family but love wasting other people’s tax dollars on their social engineering schemes. Democratic politicians have implicitly endorsed this characterization by putting distance between themselves and liberalism in their self-descriptions and policy choices. Many liberal voters, in turn, have turned away from this term because they do not want to associate themselves with the feckless politicians who, they believe, do not do enough to advance the values that are important to them. While Republicans think liberals are too radical, progressives find them too squishy.

Thomas Frank is clearly in the latter camp, as he explains in his new book, Listen, Liberal–or–What Ever Happened to the Party of the People? As the founder and former editor of The Baffler, one-time columnist for The Wall Street Journal and Harper’s Magazine, and author of 2004’s What’s the Matter with Kansas? (among several other books), Frank has never been shy about criticizing the inane celebrations of the business class, the phony populism of the self-serving culture industry and the duplicity he sees at the heart of the conservative project. In his latest book, Frank turns his gaze to the recent history of the Democratic Party, and he does not like what he finds. Specifically, he argues that its elected officials and house intellectuals have done little about the issue that, he believes, should be defining the nation’s contemporary politics: income inequality.

Inequality represents, in President Obama’s words, “the defining problem of our time.” As a concept, though, inequality is but a shorthand for a nexus of contemporary problems. George Packer compellingly describes this phenomenon as “the unwinding” in his 2013 book of that title, while Frank prefers the Victorian phrase, “the social question.” Regardless of the name, however, Frank locates in inequality “the reason why some people find such significance in the ceiling height of the entrance foyer and the hop content of a beer while others will never believe in anything again.” Over the last thirty or forty years, he avers, the lives of working people have become “wretched” and “precarious.” Yet in the face of such a catastrophe, argues Frank, Democrats “cannot find the conviction or imagination to do what is necessary to reverse” the tide of inequality. Instead, they emphasize the role of impartial, uncontrollable factors like technology and globalization, arguing that these problems can best be faced by obtaining the training and skills necessary to compete in the modern workplace.

While Democrats may believe that these positions represent the new face of liberalism, Frank argues that they abandon and even reject traditional liberal priorities. Higher levels of education will not create jobs or increase the strength of labor unions. And by emphasizing the “inevitability” of technology and globalization, liberal politicians minimize the extent to which those developments are shaped by public policy. Such an analysis absolves them of the responsibility to harness the power of government to shape the way that economic and technological factors influence the working class. Another longstanding liberal value has been that of collective action. Yet the Democratic emphasis on education and training heaps the entire burden of economic upheaval upon the individual displaced or soon-to-be-displaced worker

Frank argues that the source of the Democratic Party’s change in priorities has been a shift in its self-understanding. The party of Franklin Roosevelt once defined itself in class-oriented terms, as the representatives of workers in their battle against the “economic royalists.” Today, however, the party owes allegiance to a different group. “The deeds and positions of the modern Democratic Party,” Frank argues, “can best be understood as a phase in the history of the professionals.” The interests of the working class once defined the Democratic Party, but that time has passed. Today, it is the concerns of the professional class that set the Democratic agenda.

Professionals sit atop a hierarchy, but it is not one of wealth, but of knowledge. “Teachers know what we must learn; architects know what our buildings must look like; economists know what the Federal Reserve’s discount rate should be; art critics know what is in good taste and what is in bad.” Today’s Democratic Party is a coalition of many interest groups, but “professionals are the ones whose technocratic outlook tends to prevail,” according to Frank. Indeed, “it is not going too far to say that the views of the modern-day Democratic Party reflect, in virtually every detail, the ideological idiosyncrasies of the professional-managerial class.”

The political values of professionals only occasionally align with those of workers and the poor. Thus, instead of challenging the idea of meritocracy that underlies this stratification, Democratic policies tend to celebrate it. Since movements such as civil rights, feminism and gay liberation all exist to knock down barriers to meritocracy, they can be incorporated into the contemporary party’s priorities. But Frank points out that inequality will never be a concern of the professional class because meritocracy makes no sense without it. “Professional-class leaders … feel precious little sympathy for the less fortunate members of their own discipline—for the adjuncts frozen out of the market for tenure, for colleagues who get fired, or even for the kids who don’t get in to the ‘good’ colleges.” In particular, there is no real sympathy in this class for organized labor. “The idea that someone should command good pay for doing a job that doesn’t require specialized training seems to professionals to be an obvious fallacy.”

Frank’s presentation of his “theory of the liberal class” is the most provocative part of the book. Much of the rest is historical in content: a walk through the recent past of the Democratic Party. The combination of the debacle of the 1968 Democratic convention in Chicago and the humiliating defeat of George McGovern in the 1972 presidential race prompted a wave of Democratic self-assessment in the late 1960s and early 1970s: the “New Politics” movement, the articulation of the new philosophy of “Neo-Liberalism” in the pages of the Washington Monthly and Al From’s Democratic Leadership Council are perhaps the most prominent attempts to chart a new Democratic course. Frank argues that such efforts represented a conscious “realignment of choice” in which the Democrats intentionally sought to distance themselves from workers in order to chase after the professional constituency. “In the 1930s, the blue-collar group was in the forefront,” wrote Democratic power broker Frederick Dutton in 1971. “Now it is the white-collar sector.” For Frank, the decline of Democratic interest in cultivating organized labor served as the source of many of the party’s problems. “Closing the door on working people’s organizations also meant closing the door on working people’s issues.”

The central figure in this narrative is, of course, Bill Clinton. The nation’s 42nd president found his positions by “triangulating” between liberal and conservative views, articulating a new “third way” of American politics. Historians have just begun taking up the period of the 1990s. So far they have generally characterized Clinton somewhat positively, presenting him as an innovative figure who responded to a changing world by revitalizing a tired doctrine. In The Age of Reagan, Sean Wilentz presented a Clinton boxed in between, on the one hand, the conservative revolution represented by Ronald Reagan’s presidency and, on the other, the “self-deluding Democrats’ unrealistic assessments and expectations.” Triangulation, on this interpretation, was a “means to revive and reinforce the refurbishing of American liberalism.” Gil Troy approvingly quotes Al From, Clinton’s guru of centrism, in his claim that the president “saved progressive politics … by modernizing it.” For these historians, Clinton was liberalism’s savior.

To Frank, though, Clinton was responsible for the death of an essential part of liberalism. “Erasing the memories and the accomplishments of Depression-era Democrats was what Bill Clinton and his clique of liberals were put on earth to achieve.” One of the president's favorite sayings was that “the world we face today is the world where what you earn depends on what you can learn.” This reflects, in Frank’s interpretation, the core New Democratic principle that “you get what you deserve, and what you deserve is defined by how you did in school.” Given such a premise, which is “less a strategy for mitigating inequality than it is a way of rationalizing it,” it is hardly surprising that Democrats have little interest in championing the cause of workers.

Frank is critical of Clinton-era developments such as the president’s emphasis on balancing the budget in the face of a recession, the appointment of Goldman Sachs alum Robert Rubin and Ayn Rand acolyte Alan Greenspan to prominent positions, the North American Free Trade Agreement (1994), the draconian crime bill that both Bill and Hillary Clinton now disavow (1994), welfare reform (1996) and the termination of Glass-Steagall (1999). He is also displeased by President Obama’s decision to continue and expand the Bush bailouts in the wake of the 2008 financial crisis. Despite the hopes of many of his liberal supporters, Obama has turned out to be a moderate on inequality. Taking office in a turbulent atmosphere in which a large constituency wanted banks (and bankers) to be punished for their role in ruining the economy, Obama did little on this front. Frank’s interpretation of contemporary Democrats as those committed to the interests of the professional class explains why. “We must acknowledge the possibility that Obama and his team didn’t act forcefully to press an equality-minded economic agenda in those days and in the years that followed because they didn’t want to.”

Over the last several decades, many liberals and leftists have expressed dissatisfaction with the Democratic take on economic issues. What makes Frank’s book new, different and important is its offer of a compelling theory as to how and why the party of Jefferson, Jackson and Roosevelt is now so unlikely to champion the economic needs of everyday people. The Democratic abandonment of economic issues, Frank helps us understand, is due neither to cowardice nor to corruption. It is instead an expression of a coherent and consistent philosophy, albeit one that might not be terribly progressive. Today, conservatives who are themselves extremists caricature liberals as extremists. At the same time, would-be consensus builders decry partisanship and suggest that the best policies are to be found midway between the two major parties, without regard to what these parties support. In such a looking-glass world, Listen, Liberal is a desperately needed corrective.