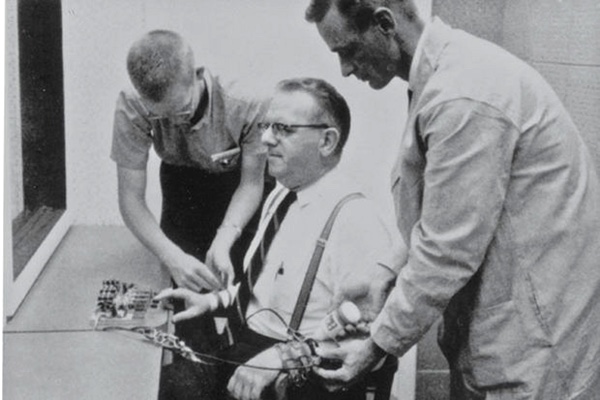 One of the most disturbing psychological experiments in American history was carried out by Yale psychology professor Stanley Milgram between 1961 and 1963. He had people (called “teachers”) acting in an authoritative manner tell Yale students and New Haven residents to electrocute students who made mistakes on a simple word association test that they supervised. The electric shocks began at 30 volts and went up to 450 volts, “punishment” for their errors. The experiment was conducted to see if the “teachers,” just ordinary people, would be obedient and follow orders, no matter how much they hurt people and detested what they were doing. The stunning result was that more than 65% of them not only shocked the students, but often used the maximum 450 volts. Many even continued to shock students after the students had collapsed. Over 1,000 experiments were conducted; the horrid results startled everybody.

The results showed that the Nazis, Milgram charged, through ”orders,” were able to get average German citizens and soldiers to carry out the Holocaust and other massacres during World War II.

The true story of the Milgram experiments has been turned into a play, Please Continue, that just opened at the Ensemble Studio Theater, at 549 W. 52d Street, in New York. It is an absorbing and engaging play and people in the audience were aghast that the “teachers” tortured students, reducing many to tears and to even wail and pull their hair out. In the actual experiments, the students were not shocked. It was a fake, but the “teachers” never knew that. It does seem to prove Milgram’s contention, and the contention of others, that the Nazis succeeded in the Holocaust by getting people to murder Jews because an authoritative figure ordered them to do it. (I am not absolving any of them of guilt because of this inclination, though. They did not have to do it.)

“Obediance, as a determinant of behavior, is of particular relevance to our time,” Milgram said in 1963. “It has been reliably established that from 1933-45 millions of innocent persons were systematically slaughtered on command. Gas chambers were built, death camps were guarded, daily quotas of corpses were produced with the same efficiency as the manufacture of appliances. These inhumane policies may have originated in the mind of a single person, but they could only be carried out on a massive scale if a very large number of persons obeyed orders.”

Neither Milgram or his assistant expected the punishment totals to be so high. Milgram, in fact, was astonished.

Milgram talked mostly about the Nazis, but you could expand the experiments’ result to include the torture of people in all wars. How many soldiers and civilians involved in all the conflicts in history, on any continent, were obedient individuals just following orders when they massacred people? Remember the American torture of prisoners at Abu Ghraib prison in Baghdad in the recent Iraq war?

The drama hits home and hits home hard. Milgram’s results do explain how ordinary people do terrible things. This of course, has been the surprise of criminal justice officials for hundreds of years. They discovered that murderers are rarely two headed ogres; they are just ordinary men and women.

The play, by Frank Basloe, was nicely directed by William Carden, who staged it in such a way that all of the ghastly elements of the experiments tumbled out on to the stage and just simply overwhelmed the audience. He gets fine acting from Haskell King as Milgram, Jared McGuire as Francis Dunleavy, Tommy Schrider as Rev. William Sloane Coffin, David Edward Jackson as James Sanders, Dylan Dawson as Mitch Halverson, Molly Carden as Margaret Hopson and Jonathan Randolph Silver as Sol Dashoff.

The second story also took time away from Please Continue. That time could have been used to strengthen the larger drama. With more time and space, playwright Basloe might have added some more scenes to the Milgram experiments play from the victims’ point of view. The character of Milgram could have been built up more. How did he feel about all of this, and the fame in brought him?

There is much history in the play, and a few jabs at higher education and Yale, in particular. The program even has a lengthy historical note on the experiments which helps you to understand the play and the times.

A negative: nowhere is all of the criticism of the experiments mentioned. Dozens of psychologists argued in the ’60s that it was unfair to compare the Yale students to the Germans. In many cases, the Germans did know the Jewish victims somehow or came to know them, or at least saw them, in concentration camps. The Holocaust did result in the murders of six million people and there was nothing fake about it. Critics also said that Yale students did not represent Americans overall and that Milgram’s sample of victims, and their background, was far too small and not representative. Milgram always defended his work, though social scientists have since found deep flaws in his methods.

Every person who walked out of the Ensemble Studio Theater had to ask themselves what they would have done if they were a “teacher” in that experiment. Would each person, man or woman, young or old, hit the button and listen to the student in the glass booth writhe and scream, face contorted, chest surging outward against the restraints and fingers widening in pain?

What would you have done? After all, you were ordered to do it. None of this was your fault, right?