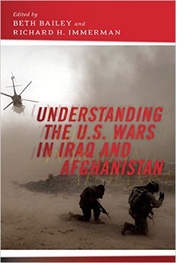 The insatiable need for oil and the Cold War’s bitter rivalry drove the US to become deeply entangled in the Greater Middle East. In 1953, for example, the CIA and its British counterpart cast out Iran’s democratically elected leader Mohammed Mossadegh and replaced him with the Shah. The Ayatollahs arrived after he fled. By 1980 the US was supporting Saddam’s Iraq in its war against Iran. A decade later, the first President Bush dispatched hundreds of thousands of US troops to “save” Kuwait from Saddam’s Iraq. The Greater Middle East remains as complex and confusing as ever.

Fortunately, Understanding the US Wars in Iraq and Afghanistan, co-edited by historian Beth Bailey who directs the University of Kansas Military and Society Center and authored America’s Army: Making the All-Volunteer Force and Richard H. Immerman, a Temple University historian whose books include Empire for Liberty: A History of US Imperialism from Benjamin Franklin to Paul Wolfowitz and The Hidden Hand: A Brief History of the CIA, makes a determined if hardly definitive effort to comprehend events since 9/11.

Their book, a collection of well-crafted, at times grim, but always thoughtful essays, though only lightly touching on historical antecedents, aims to re-examine the two wars’ origins, their complexities, limited successes and failures, together with the cost in lives and money – which the Iraq War alone was estimated to be in 2008 by Linda Bilmes and Joseph Stiglitz some three trillion dollars.

Not all the writers agree and there is a good deal of nuance in their arguments. What is most striking is Sam Lebovic of George Mason University’s “Limited War in the Age of Total Media” and his portrayal of a “woefully misinformed” American public. Why “misinformed?” There were, of course, a number of reasons, but Lebovics cites the fact that foreign perspectives were largely ignored in the run-up to Iraq (remember “freedom fries”?) and also because “pro-and anti-war positions were not presented equally,” thus leading to “simplistic understandings.” Easily forgotten too is that most pundits, talk radio shows, newspapers, especially the influential New York Times (it later apologized for its earlier pro-Iraq War position) and politicians in both political parties rushed to back the war.

Now, with the rise of ISIS, there is the haunting fear that in pursuit of ISIS and similar groups, the blind will once again lead the blind and the crucial lessons to be learned will be ignored. Aaron 0’Connell, Associate Professor of History at the US Naval Academy, Marine Corps reservist and former Special Advisor in Afghanistan and the Pentagon, says, “It seems that when charting a course for the future, the American government is either unwilling or unable to be mindful of the lessons of the past.”

Co-editor Immerman reveals that before the invasion of Iraq, the CIA ”had little reason to doubt that Saddam had hidden in Iraq a stockpile of WMDs. The Intelligence Community collected no evidence disconfirming this assumption. But neither did it collect conforming evidence. So it hedged its judgments. The effect on an administration that had already rushed to judgment was inconsequential.” Immerman also warns that even after the withdrawal of US troops from Afghanistan “the danger of battle-hardened insurgents – and the Islamist state is only the latest exemplar – gaining access to Pakistan’s nuclear arsenal will be no less severe.”

Michael Reynolds, Professor of Near Eastern Studies at Princeton, returns to 1979, when Americans were held hostage by Iranian radicals and the Soviets began their ruinous war in Afghanistan. Reynolds offers a rarely-heard comment. “One cannot understand why the US went to war in Afghanistan,” since the “reason why a non-state organization led by two Arab citizens of nominally pro-American states assaulted the US and why that organization was based in Afghanistan are anything but straightforward.” Two years later, Washington’s bellicose theorists, “woefully ignorant of the course of history in the Greater Middle East,” promoted the invasion of Iraq, with some accusing Saddam of ties to the 9/11 killers.

Turning to Afghanistan and representing different views, George Washington University’s Stephen Biddle, who served on Generals Petraeus’s and McChrystal’s advisory teams in Baghdad and Kabul, and Duke’s Peter Fever, who served as Special Advisor for Strategic Planning and Institutional Reform on Bush’s National Security Council staff from 2005-2007, explain what they believe were the policy limits the White House confronted after 9/11.

“We are struck by the absence of radically superior or decisively inferior alternatives. The strategic challenges that 9/11 created for the US simply do not look wholly avoidable by any of the options open to decision makers at the time” since any new terrorist attacks can leave the US tolerating “some terrorist violence against innocent American civilians.” And had the US acted less forcefully than it did, “both parties would have made such a policy unsustainable.”

Conrad Crane, who directs the US Army Military History Institute at Carlisle Barracks, offers an informative essay decrying many contemporary books on the subject as “instant histories,” and cautioning that “the military histories appear decades after events.” And then he wisely concludes, “Perhaps the best legacy of Iraq and Afghanistan for American strategy is that even brilliant military operations cannot salvage a bad strategy produced by flawed assignments and shorted policies.”

What they produced, however, in Iraq especially, writes Lisa Mundey of the University of St. Thomas in Houston, were 4,400 dead US soldiers. And after President Bush landed on the deck of the USS Abraham Lincoln for his triumphant Photo Op celebrating “Mission Accomplished” 2,400 more would die, and many more would be wounded, some grievously so. Reports of PTSD, traumatic brain injury, amputees, suicides, broken marriages, homelessness and drug addiction swamped the mass media. It is a topic also covered by David Kieran of Washington and Jefferson College, who reminds us that these veterans may need decades of governmental support. Meanwhile, the VA, (now the Department of Veterans Affairs), overwhelmed by America’s addiction to war, has served as a convenient scapegoat.

Sounding angry, Mundey adds, “the experiences of going into combat, coming under mortar fire, and feeling concussive blasts from roadside bombs were strikingly familiar in Iraq and Afghanistan. These experiences set the women and men who served apart from those who know about the wars only from the safety of home.”

In obvious agreement, Terry Anderson a Texas A&M historian and Vietnam veteran, asserts in “9/11: Bush’s Response,” that “Bush and his top advisors, who had no knowledge about Saddam or Iraq and its people, dragged the US into the greatest foreign policy blunder in American history.”

So why were there no sixties-style protests? The University of Kansas’s David Farber explains why antiwar movements were not able to replicate the Vietnam era. For one thing, 9/11 meant that vengeful Americans approved of intervening in Afghanistan. Even when it dragged on “most expressed only weariness with the war, not a sense of betrayal or a belief that the US had made a fundamental mistake in sending troops to Afghanistan.” Iraq was quite different but never brought many protestors into the streets or onto college campuses.

Other essayists include the Open Justice Initiative’s Legal Officer Jonathan Horowitz, who writes in “Human Rights as a Weapon of War” that US personnel who violated human rights “led to the erosions of the military’s reputation at the local and international levels, which then prevented the US from claiming a high moral authority.” And Louisiana Tech’s Andrew C. McKevitt’s “Watching War Made Us Immune: The Popular Culture of the Wars” makes the essential point that the US’s GWOT policies “encouraged fantasy worlds that competed with reality and left many Americans immune to the real consequences of US foreign policy in the post 9/11 era.”

Perhaps most compelling is the book’s section on “Legacies and Lessons,” where Vassar College's Robert Bingham asks, “Now that ISIL [ISIS] is on the march, can the Obama administration [and its successors] convince voters and allies that Iraq [and the Greater Middle East] is again worth saving?”

And to those hoping for the reintroduction of US troops against ISIS and Assad, Aaron O’Connell offers his levelheaded rejoinder. “How shall the American military and government avoid similar errors in the future given the fact that the ones committed here were already repetition of earlier mistakes?”