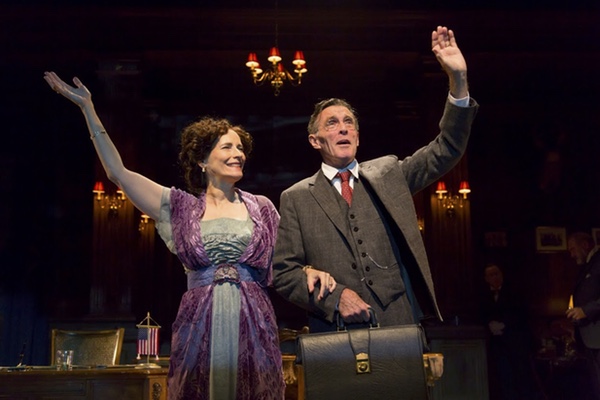 On October 2, 1919, while on a national speaking tour to drum up public support for his proposed League of Nations, President Woodrow Wilson suffered a stroke that debilitated him. He was rushed back to Washington, D.C., whisked to the White House and put in bed under a doctor’s care. He remained in bed, unable meet with anyone or do any work and often incoherent, for more than four months. What to do? Should he resign? Should the Senate declare him incapacitated and remove him from office?

That was when his second wife, Edith, a control freak, stepped in and made a decision. The President would remain in bed, unseen by anybody, and, on his behalf, she would run the United States. She set up a desk and phone for herself, conducted meetings, saw Governors, Congressmen, Senators, her husband’s aides, talked to the press and, a wife unelected to any post, took over the country.

The bizarre true story of Presidential incapacitation at the end of World War I and at the height of the struggle for the League of Nations, and the First Lady takeover, is told in Joe DePietro’s brilliant historical drama, The Second Mrs. Wilson, that opened last week at the George Street Playhouse, in New Brunswick, N.J. The play is a tour de force of political intrigue and high level drama, with the existence of the United States in the balance. The two stars, John Glover as President Wilson and Laila Robins as his wife, and director Gordon Edelstein, work hard and create a mesmerizing, enchanting, and a bit scary, story about Wilson’s disappearance into the bedroom and his replacement in the Oval Office by his determined and wily wife.

The story is known by historians, but not most Americans. Why did she do it? Simple. Congress threatened to declare him incapacitated and make Vice President Thomas Marshall the President. By hiding her husband away until her recovered (he never really did, but got through his second term), she was able to protect him. The playwright strongly hints, even though the actual story is not completely known, that she did not consult with her husband on decisions; she simply made them on her own.

The play starts with a quick build-up of Edith as a domineering woman and Wilson as a man smitten with her like a schoolboy. She has the Chief Executive wrapped around her finger. He is unable to get needed support in Congress and the Senate for his League of Nations, so he hits the political trail, taking a train across the country to give speeches for the League. The exertion and stress bring on his stroke (he was not well anyway) and he collapses. Mrs. Wilson then decides to protect him and stands up to the most important people in America and the persistent press to do so. She conspires with the White House doctor, Cary Grayson, lies about his condition to all and hopes, fingers crossed, that he will get better. Until he did, she ran the show.

Glover is just splendid as Wilson and Robins, with a lazy southern drawl, is even better as the tough First Lady, who stares down everybody. The play soars not just because of her, though. Other fine performances are by Sherman Howard as Senator Henry Cabot Lodge, head of the Foreign Relations committee, Richmond Hoxie as Vice President Marshall, Stephen Spinella as diplomat Edward House, Stephen Barker Turner as the doctor and Christophe C. Gibbs, Brian McCann and Andre Penn as attendants. Together, they present a scintillating tale of political intrigue at the White House in 1919 and remind all that our Presidential succession law, even now, nearly 100 years later, is pretty uncertain.

Everybody in the audience at the intermission was the asking the question presented on stage by Mrs. Wilson: if the President gives up power because he is incapacitated, can he get it back? There was nothing about it in the Constitution at that time. (After John Kennedy died an amendment was added clarifying matters.)

The other question constantly asked in the play is about the President’s health. As long as he appears to be doing better, everybody goes along with his reclusive life. Mrs. Wilson, and the doctor, keep telling all that he is “improving” every day.

Those uncertainties were what forced Mrs. Wilson to lock the bedroom door and take over. Was she right? Did she do a good job?

The tension filled plot of the play, with as much high blood pressure in it as Netflix’s political series House of Cards, involves the fight to ratify the League of Nations. Edith Wilson entertains many amendments and changes to the League of Nations bill, agreeing with some and disdaining others, and fights tooth and nail with Senator Lodge and others over them. She tries to get advice from the President on them, but he was either unable to speak or just muttered. So she made all the decision herself, according to the playwright, but the bill was killed anyway. Was that her fault? Would it have been defeated anyway (probably)?

Playwright Pietro, working with masterful hands, has taken a complicated and important historical event and turned it into an absorbing drama.

Historically, Mrs. Wilson was not the first woman to run the country because her husband was ill. Dolley Madison did the same thing, locking her husband James in a White House bedroom, keeping everybody out and running the nation until he recovered from an illness.

Over the years, Presidents have been sick for weeks and months, shot, or rushed to hospitals. Nobody ever pushed the idea of making the Vice President the Commander in Chief. They all just let it go. That happened in Wilson’s case, too. Members of Congress never pushed that hard but insisted on knowing his condition. At one point,  Senators meet with the very sick Wilson, who does the best he can to impress them. They decide that he is an invalid and bedridden, but in decent enough shape to run the country. They let it go. They did not want, nobody ever wanted, to sail into the constitutional storm, full of political hurricanes, that declaring the President incapacitated would cause.

Could this happen today, with twenty-four hour press coverage of the White House? Could Michelle Obama hide the President away for four long months and run the United States herself? Probably not.

Then again, if she hid him away somewhere in Hawaii and Joe Biden became ill, and Paul Ryan quit as Speaker of the House in a huff like John Boehner just did and John Kerry went bike riding and broke his leg again ....

History lovers and political junkies will adore this play, but it is such a dynamic drama that people who do not know the West Wing from chicken wings will enjoy it, too.