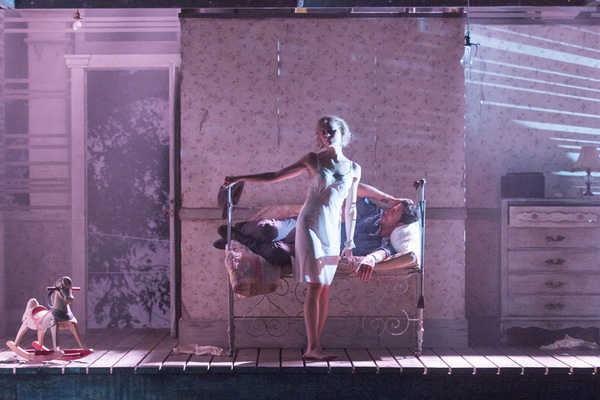 Time magazine said that the 1956 film Baby Doll was “just possibly the dirtiest American-made motion picture that has ever been legally exhibited.” New York’s Cardinal Spellman said it was “evil in concept…certain to exert an immoral and corrupting influence on those who see it.” The ultra-powerful Legion of Decency condemned the movie.

Well, given all of that, I could not wait to see the stage version of it at the McCarter Theater, in Princeton, N.J., where it opened Friday.

Baby Doll was a screenplay by Tennessee Williams, that master of sex in the afternoon in the torrid South of the ’50s. McCarter’s artistic director, Emily Mann, with Pierre Laville, adapted it for the stage. There are many differences between the movie and the stage version, naturally, but the heart of the story, and its steaminess, remain. McCarter’s Baby Doll is a sizzler.

Archie Lee Meighan, an idiotic southerner, has burned down the cotton gin belonging to ‘foreigner’ Silva Vacarro, an Italian-American who is his rival in Mississippi. Silva is looking for witnesses to the fire and winds up at Archie’s house, where he meets curvy 19 year old blonde sexpot Baby Doll, Archie’s wife, who has not had sex, wants sex very badly and, it seems, with just about anyone except her husband, with whom she has not crawled under the sheets in two years of marriage. On one very hot summer afternoon Silva goes after Baby Doll to sign a statement that she knew Archie burned down his cotton gin and Baby Doll goes after Silva for another reason. The two remain in the house all day in bed upstairs. Archie returns and suspects something is going on between them. He invites Silva to dinner and Silva, whose emotions are running hot about everything, a man ready to burst at any second, accepts. There is a shouting match between the two men and Archie runs to get a rifle.

You cannot go to Baby Doll without comparing it to the movie that caused that entire sexual ruckus sixty years ago. Overtly, Susannah Hoffman, who plays baby doll, is not traipsing about the farm like a Seventh Avenue hooker. She never takes all of her clothes off. Neither did Carroll Baker, who earned an Oscar nomination for her portrayal of Baby Doll. Hoffman, like Baker, slowly sashays rather than struts. She wears a modest white slip and does not make a big deal out of sucking her thumb in bed, as Baker did, but you can only do that in movie close ups. The sex in this Princeton play is slow and subtle, but it is deep and it turns the heat up in the old theater to well over 100 degrees – in the shade.

There is a scene in the play when baby doll, barefoot and in her slip, walks up the stairs, back to the audience very slowly, body shifting to the right, the left, the right, the left, her bottom slowly undulating. I was amazed that the Princeton fire department was not called to put out the blaze from the heat Hoffman generated as she slithered up those stairs. Hoffman, like Baker, exudes sex, but in a laidback way. And, like Baker, she turns from a silly “white trash” type of immature girl into a sleek woman after her afternoon in the bedroom with Vacarro. Baby Doll is grown up, or as much as one could grow up at 19 in the Mississippi cotton fields. Hoffman is very sexual and very talented.

Baby Doll would steal the show from any cadre of actors, but the foreigner, Vacarro, played by Dylan McDermott, certainly holds his own on stage. He slumbers through the first part of the play as n oafish, down home farmer, seemingly smitten by Baby Doll’s charms and boyishly toying with the hem of her dress. But in the second half of the play he turns into a sharp opportunist and schemer who appears to get what he wants. At the dinner, McDermott is called a “wop” and “dago” by Archie (Archie uses the ‘n’ sword profusely earlier) and just explodes at him. He stands up and erupts like Vesuvius; he scared half the audience. It is a powerful scene in a powerful performance.

Mann and Laville have scaled down the story and put almost all of it in a marvelous house set with a front yard where characters ramble about. Mann, who directed the play, uses the large house as a playground for sex and violence. The action is sharper here than in the movie although, granted, it loses some of its cinematic sweep. It is sexual, like the film, but certainly not a carnival of erotica. The movie never really was, either. The movie’s lascivious posters and racy ad campaign gave it its heat and brought on all of its trouble.

There is humor in the play, at least in the first half. Williams invented a marvelous character, senior citizen Aunt Rose Comfort, who is Archie’s housekeeper. Her hobby is to go down to the County hospital, where patients are given chocolates every day, and steal the candy. Brian McCann plays a local sheriff.

Baby Doll kicks off a season of mostly history plays at the McCarter. If the rest are half as good as this one, New Jersey theatergoers are in for a year of both stage and history bliss.