Behind the Scenes at the 1989 Tiananmen Square Massacre 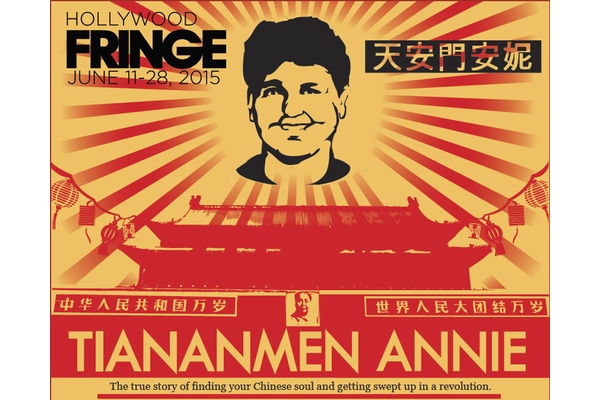 When you see a play about the Tiananmen Square massacre in Beijing, China, in 1989, in which several thousand protestors were killed and thousands more injured, you expect to see the massacre, but in the new play Tiananmen Annie, written and performed by Ann Starbuck, you get a behind the scenes look at the events leading up to it through the eyes of an American college girl who worked part-time for CNN television and suddenly found herself in the middle of history.

Tiananmen Annie is a delightful story, full of absorbing anecdotes, about Starbuck’s time in Beijing and how, as a CNN “go-fer,” she learned all about politics and television real fast. The charm of the story is that she describes in great detail, with both fear and humor, all of the events leading up to the political thunderclap heard 'round the world and the people, Americans and Chinese, involved in it.

The story in the one-woman play is solid. Starbuck was a CNN aide in 1989. She needed pocket money as an exchange student and answered the call for translators, never dreaming that she would wind up in the center of a storm. The beauty of the story is that in it she plays not just herself, but CNN producers, Chinese officials, hotel clerks, black market wizards, fellow students and people she meets on the street, including wonderful, and pretty scared, cab drivers. She is marvelous as an old Chinese woman with a broken foot and as a weary and frightened old professor trying to use sweetness to get his family out of China as the army readies to attack the demonstrators. Her story about standing on the line of thousands of foreigners trying to get out of Beijing when the Tiananmen politics start to get tense is vivid, as is her cab ride from the airport to a room to spend the night upon her arrival in the Chinese capital.

The way she tells her tale in this show at the 64 East Fourth Street Theater in New York, part of the annual Fringe Festival, is very unusual. You don’t expect this kind of chronicle when she walks on to the tiny stage, but the story grows quickly and you are caught up in it.

You learn a lot of history and much about the deviousness and duplicity of many in China in that era. As an example, you had to bribe just about everybody to get anything done. It cost CNN, Starbuck claims, $20,000 in fees to get their cameras through customs. All cab drivers need bribes to get you anywhere fast.

There are colorful stories about China’s dilapidated government infrastructure. Example; foreigners often have to wait three days in an airport lounge to buy plane tickets to go anywhere.

There is a lot of humor in the show, As an example, the number one television show in China in the 1980s was the American cop drama Hunter and Chinese officials, Starbuck says, often quoted lines from Hunter on the show, as Americans quote Abraham Lincoln, Franklin Roosevelt or Martin Luther King Jr.

The college girl saw the Tiananmen human rights protests, that lasted for seven weeks before the Red Army moved in and cleared the square in a thundering parade of tanks, as very exciting stuff. She reveled in her ability as a young student to get CNN’s people around town through her wit and a few bucks. She became a seasoned TV veteran as the days went by and the CNN people leaned on her to help them get things done. She translated, spoke to local officials for them, ordered food and got them through sticky situations (such as reducing their $5,000 fee to get a fax machine into the country down to just $1,500 and a box of Marlboro cigarettes).

You learn a great deal about the Tiananmen Square massacre, but you also learn an enormous amount about Chinese history in the tumultuous 1970s and ‘80s. Much of what you learn is not in your guidebooks, either.

Ms. Starbuck’s story is filled with tension. You know what happened when the Red Army moved in, but that is the very tail end of the play. The story here is the growth of a woman in crisis and how she adapts to it. Sometimes she adapts well and sometimes badly, but she survives. In the end, she says sadly, she had to get out of China and she saw the actual June 4, 1989 massacre on television.  On what channel? Why, CNN, of course.

The Fringe Festival is a workshop for plays and we hope this story has a long life at theaters around the country in the years to come. It is funny, emotional and tells you a great deal about Chinese history and the massacre. China is always in the news, especially with their economic crisis this month, and this story gives people a good background to China’s troubles.