Review of Paul Moses’s “An Unlikely Union: The Love-Hate Story of New York’s Irish and Italians”

Robert D. Parmet is Professor of History at York College of the City University of New York and author of “The Know-Nothings in Connecticut,” “Labor and Immigration in Industrial America,” and co-author of “American Nativism, 1830-1860.” 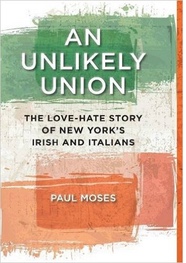 The competition and conflict between ethnic groups in New York City in the nineteenth and twentieth centuries has long attracted historians and social scientists. See, for example, Daniel Moynihan and Nathan Glazer’s Beyond the Melting Pot: The Negroes, Puerto Ricans, Jews, Italians, and Irish of New York City (1963; 2d ed. 1970) and Ronald Bayor’s Neighbors in Conflict: The Irish, Germans, Jews, and Italians of New York City, 1929-1941 (1978). Adding to the literature is Paul Moses, a professor of journalism at Brooklyn College and a former editor at Newsday. “An Unlikely Union” is a highly readable account of two groups, the Irish and Italians, who, as he contends, began as foes and eventually became friends. Written with affection, reflecting the author’s own Irish and Italian ancestry, this book is both personal and human, foregoing grandiose hypotheses and elaborate statistical tables for clear narration that features biographical sketches of numerous colorful and intensely interesting characters, such as Giuseppe Garibaldi, Mother Frances X. Cabrini, Archbishop John Hughes, Terence V. Powderly, Elizabeth Gurley Flynn, Carlo Tresca, Al Capone, Frank Sinatra, Fiorello La Guardia, and Rudy Giuliani.

In the 1820s, when Irish Catholics began arriving in the United States in great numbers, largely Protestant America greeted them with hostility. Alarmed that the new common schools contained Protestant prayer and bible-reading, the Irish found educational refuge in their own schools run by the priests and nuns who had accompanied them to America. Thus, the Irish were called enemies of public education. The attacks on them were focused in good part on the Catholic Church which, Protestant critics claimed, harbored gross immorality in its convents and aimed to dominate the nation. As the Irish Catholic influx grew, especially following the Great Famine of 1845 in Ireland, so did the nativist clamor to control them, especially by limiting their political power in America. Finally, at mid-century, a secret organization that journalist Horace Greeley dubbed the “Know-Nothings,” emerged to lead the charge against them. Led by the Irish-born Archbishop John Hughes of New York, the Church survived the outburst of intolerance, and the nation turned to a more genuine threat, a crisis over Southern slavery and the threat of a civil war.

The nativist turmoil taught the Church and the Irish that it had to be defended from its enemies in the United States, among who were Italians who supported the Risorgimento, the movement for Italian national unification, which the papacy opposed. As Moses describes, in the 1850s the inflammatory anti-papal orator Alessandro Gavazzi visited New York and patriot Giuseppe Garibaldi lived on Staten Island. In Italy, as elsewhere, anti-clericalism was quite evident.

Then came the 1880s and heavy immigration from southern Italy, creating an “Italian Problem” in the Church and elsewhere. Newcomers from southern Italy were moving into Lower Manhattan and competing with the Irish for employment and housing. To those already here, they looked and sounded different and had their own ideas about religion, especially Church authority. Though many did join the Church, they were not always welcome. Purporting to speak for American workers, Knights of Labor Grand Master Workman Terence V. Powderly, whose father had come from Ireland, testified before a congressional committee that the Italians “were not the right class to make good citizens.” A stereotype would form of Italians as not only low class, but also highly prone to criminal behavior.

Moses vividly describes the strained Irish and Italian American relationship within the Church. The Old World Italian anti-clericalism and New World Irish condescension toward Italian Americans produced clashes not easily overcome. The Irish hierarchy, which kept power in its own hands, even had contempt for the popular Italian street festivals. Perhaps even sharper than the difference between the prosperous German Jews and their Eastern European “poor cousins,” the low regard extended beyond the Church to such Irish-controlled organizations as the New York Police Department and Tammany Hall, the Democratic political machine.

The Irish were also the best prizefighters. Respecting their dominance, Italians (as well as Jews) often changed their name to appear Irish. Waterfront gang leader and future union boss Paul Vacarelli became the bantamweight fighter Paul Kelly, and Anthony Martin Sinatra, the father of singer Frank Sinatra, fought as Marty O’Brien. (In later years his son would anger Irish American band leader Tommy Dorsey by breaking a contract in order to sing on his own, without a band.)

As Moses observes, when Jewish playwright Israel Zangwill described America in 1908 as a “melting pot” of immigrants, “the crucible of intermarriage was set to low heat, especially for Italians.” Yet he also readily notes that assimilation did indeed occur, and the ranks of those who intermarried include well-known Italian Americans such as mobster Al Capone and labor radical Carlo Tresca. Following the Second World War, though “Irish-Italian marriages became common,” the two sides “were still more likely to marry spouses from their own ethnic background.” Even so, despite the history of friction, “when Italians did marry outside their ethnicity, they were most likely to marry an Irish partner.” Membership in the Catholic Church, often urged by Irish spouses, was usually characteristic of Irish-Italian marriages.

If there has been a unifier other than religion, as Moses suggests, it is “food and family.” “By the 1950s,” he writes, “pizza had become a Friday night staple in the homes of both Irish and Italian Americans.” In addition, Italian food in general “entered the American mainstream,” and “the new message about Italians was that they “were accepted, with their food a sign of romantic love and strong family bonds.” Moses’s chapter on the cultural evolution of Italian and Irish society makes for especially delightful reading. Similarly, he sheds light on the Irish influences on Mayor Rudy Giuliani, notably his Catholic school and police and fire department family background.

In sum, there is much in this book to savor. Written with a loving hand, it offers a warm understanding of two ethnic groups that eventually came to accept each other. The attainment of that harmony is what provided inspired Moses to write his account. “In this world of frayed raw racial and ethnic connections,” he says, “the Irish and the Italians of New York offer a story of how peace was made.” It “was achieved through love and intermarriage,” and “because they were so often thrown together, whether or not they liked being near each other.”