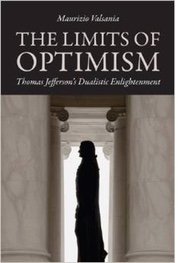 The thesis that Jefferson was an “optimistic humanist,” say Maurizio Valsania in his The Limits of Optimism (UVA Press, 2011) cannot be sustained. “Jefferson’s humanistic message was in constant dialog with an antihumanistic outlook.” His optimism likewise “always interacted with a pessimism” (1).

Valsania, however, does not wish us to think of Jefferson as “being a despondent man.” This is no book about depth psychology. Instead, “it is about his dealing with pessimism, with his having a sense of the tragic, and his attempts at coping with impossibility and the ocean of negativity.” It would be time wasted to speculate on “the secret reasons why Jefferson employed the idiom of unabated optimism,” so Valsania opts for remaining on the surface. He wishes to tell the story “that, not why, Jefferson was committed to this type of optimism” (33). With optimism being so prevalent in Jefferson’s writings and with that acknowledged by all, surface description seems an inconsequential aim.

The focus of the book is Jefferson’s negativity. “Negativity was a basic presence in Jefferson’s philosophy” (2). Use of the metaphor “ocean of negativity” is not an isolated incident, but derived from Moby Dick, where Melville writes that an “appalling ocean surrounds the verdant land,” and so likewise the soul of man, “full of peace and joy,” is “encompassed by all the horrors of the half known life” (7). Melville’s claim, of course, relates to every person, and Valsania’s appropriation of Melville suggests that he is in agreement with the novelist. If so, to develop a thesis that what is true of every person is also true of Jefferson can be of no interest, unless one, to fill in the syllogism, is incognizant of the fact that Jefferson was a person. So, just how fetching and illuminating is the thesis?

Valsania develops stepwise his thesis. Chapter 1 tells a story of the Enlightenment to set the stage for Jefferson. The second chapter is about Jefferson’s seemingly “unabated optimist” (32). The third chapter concerns Jefferson’s transformation from a hero without doubts into a man with “an anxiety-ridden worship of possibilities” (8). Chapter 4 is about Jefferson’s recognition that there is life beyond possibilities, since “it is clear that necessity is possibility’s complementary double”—a cutesy, but aidless observation. Here, “nature and time are introduced as the two most eloquent masks worn … by possibility” (8).

In the next chapter, Valsania turns to Jefferson’s despondency. “Negativity is still the central character of the story,” yet now negativity is the result of an “enlightened realism,” generated by a sense of “natural and historical necessity.” He continues, “When necessity is internalized as a sense of impossibility,” there is recognition of “the possibility of failure” and “the certainty that human life is limited”—viz., “it is open to an abyss and to a realm of impossibilities” (114).

The final chapter, concerns Jefferson’s maturation—i.e., his distrust of ideals and imagination. “A rich vein of realism is traceable beneath Jefferson’s famous idealism. Such a duality is an unavoidable conclusion, as long as a truly enlightened philosopher … is asked to struggle with both necessity and impossibility” (8).

Jefferson was not the unswerving, naïve optimist many have portrayed him to be. He had a firm grasp of negativity—hence the motivation for the book. We have thus something to learn from Jefferson. “A study of Jefferson’s awareness of negativity is a good way of educating our sense of the tragic, our humility, and our desire to further the best hopes of the Enlightenment. We desperately need to educate ourselves to see through the myth of unlimited possibilities.”

Just what is this “myth of unlimited possibilities”? Jefferson, as a utopist and a progressivist, certainly always had an eye to the future, and in that regard, he was ever in the business of exploring possibilities, but what are we to make of the “unlimited possibilities” Valsania ascribes to Jefferson? What precisely does the term mean? Jefferson, we are told in the final chapter, was a dreamer. Were his dreams always quixotic, micawberish? What of his Bill for Religious Freedom, his Declaration of Independence, his Corps of Discovery, the Louisiana Purchase, his lifelong partronage of the science, and the University of Virginia, to name but a few of his many dreams actuated?

Then there is Valsania’s frequent usage of hyperbole, often in the form of unsustainable generalizations (italics throughout mine). “Negativity is always traceable beneath the surface of his optimistic discourse” (2). How is one to demonstrate such a sweepy claim if it is beneath the surface? Moreover, does not Valsania promise in his introduction to avoid “secret reasons”? In chapter 2, he states, “The success of the Revolution demonstrated to Jefferson that the past was somehow always ‘wrong’ when compared to the new present.” He adds, “Jefferson was unwilling to look backward” (34). He draws those inferences from a letter to Priestley (27 Jan. 1800), in which Jefferson states “we are to look backways instead of forwards for the improvement of the human mind.” If the past was always wrong, why did Jefferson champion the teachings of Jesus as the greatest course of morality (e.g., TJ to Benjamin Rush, 21 Apr. 1803)? If Jefferson was unwilling to look backward, why did he spend more time reading the works of the ancients—e.g., Tacitus, Cicero, and Seneca—than other works? Because Jefferson was a progressivist, he did draw from the past to prevent mistakes in the present and future—that much he often says—but that does not warrant the harefooted generalization concerning the invariable wrongness of the past.

I cite other instances of exaggeration. In chapter 5, Valsania writes: “Americans, from the outset, relied on visions. … They were involved in a utopian and literary effort to reform the whole character of American society. Literature was and still is endemic throughout American culture, not just a discipline within it. In this country, everything is and was literature.” In doing so, Americans committed (and are still committed) to “myth and utopia” (143). How are we to take such blanket claims? Is Valsania asserting that each American was (and is) quixotic, or that the tenor of American culture was (and is) quixotic? He continues, “Whether Jeffersonian or anti-Jeffersonian, the whole late eighteenth-century American society chose to be committed to visions of betterment; no matter what ‘betterment’ meant, no matter whether the goal was envisioned in the future or located in the past” (144). Again, we have an incautious generalization. To add to the confusion, Americans were committed to betterment, even though they might not have known what the term meant!

There are numerous instances of verbigeration. I cite two. “The Enlightenment and all its tensions were periodically belied by this type of optimism, unabated, unshakable, and unswerving” (32). How do the Enlightenment and its tension belie optimism? Valsania never explains. Again, “Jefferson tried to resist the consoling myth that humans could attain complete dominion over the universe they inhabited” (2). The bogusness of the claim is obvious. Where precisely does Jefferson in his corpus discuss the notion of complete dominion over the universe? Nowhere.

Much of Valsania’s argument is framed on serious misreadings of Jeffersonian texts.

Referring, for instance, to Jefferson’s controversial letter to William Stevens Smith (13 Nov. 1787), Valsania says, “Jefferson was clearly conveying the idea that Shays’ Rebellion was an imagined rebellion and that no importance should be credited to that episode” (142). Jefferson writes that the rebellion was “so honourably conducted”: that its motives were “in ignorance, not wickedness”; that there has been one rebellion among 13 states in 11 years; and that “the tree of liberty must be refreshed from time to time with the blood of patriots and tyrants,” as liberty is “it’s natural manure.” Are such claims evidence of an “imagined rebellion”?

Jefferson, Valsania is fond of saying, was a dreamer. He cites the ending of a letter to John Adams (1 Aug.1816): “I like the dreams of the future better than the history of the past.” That statement, says Valsania, marks “an important step in Jefferson’s painful march toward the acknowledgment of himself as a dreamer asleep in the land of dreamers.” It discloses Jefferson’s “acquaintance with the existential void and with imagination as essentially deceptive” (146). In the letter, Jefferson concedes that both pain and pleasure are meted out to every person and that the earliest and latest years of life are perhaps more painful than pleasant, but adds, “Life is a fair matter of account, and the balance often, nay generally in it’s favor.” Is that evidence of existential void?

Valsania’s final chapter underscores Jefferson’s Darwinian moment—a “demythologizing of imagination.” Jefferson came to realize that humans—evidence comes with his letters to John Colvin (20 Sept. 1810) and John Holmes (22 Apr. 1820)—are “creatures of the present and are committed to the brutal fact of their animal survival. In a word, he admitted the brutality of expediency.” Thus, Jefferson tried to live consistently with philosophical ideals, but found the principle of self-survival to be axial, and found reason, right, law, and morality to be ancillary (149–51 and 157).

Here, unfortunately, Valsania misconstrues both letters. I illustrate with Jefferson’s now-famous wolf-by-the-ears letter apropos of slavery to Holmes. Jefferson writes: “As it is, we have the wolf by the ears, and we can neither hold him, nor safely let him go. Justice is on one scale, and self-preservation in the other.” Explains Valsania, “Jefferson was clearly implying [sic] that we have no choice, and that self-preservation is the only basis from which finite creatures are compelled to start.” He sums: “Principles, reason, and morality have no application when the animal, which is in us all, perceives that the real priority is to increase one’s chance of survival. Both individuals and society are subject to this form of natural necessity” (160). Valsania misses the point. Morality is always substratal for Jefferson. He merely recognizes that the time is not always right to do what is right. Many cultures are morally retrograde, and so the moral sense will perceive that doing what is right when circumstances are not right will result in greater overall harm than good in the long term. In that regard, the right thing to do is relative to circumstances, but still objective. That is why Jefferson, following ancient virtue ethics, did not believe in fixed moral principles. Moreover, morality for him was a matter of sensitivity, not rationality.

Valsania’s Jefferson, a proto-Darwinian, is a man who fundamentally recognizes power. History is a matter of survival and reflects the point of view of the winner. Wining and losing are the only available options” (160–61).

Valsania ends: “A philosopher devoted to travel on the ocean of negativity … Jefferson was suspended between his spiritual destiny, his dearest moral vision, his universal dreams, his optimism—which he could not fulfill—and his animal and historical nature, his sheer expediency and his particular privileges—which he could not retain. The conditions that made Jefferson a winner would eventually make him a loser” (164).

At book’s end, it is prodigiously unclear what it is that we are supposed to have learned. If it is that every optimist, even Thomas Jefferson, has cloudy days, then that is too obvious a truth around which to frame a book. If it is that Thomas Jefferson’s optimism masked a powerful ambivalence—viz., that his optimism was neutered or accompanied by an equally powerful, but much less manifest, pessimism—then that thesis is poorly supported by the textual scraps of evidence that Valsania throws the way of his readers. The parting sentence, that Jefferson was a loser as well as a winner, is empty.

Valsania’s Jefferson is a figure unrecognizable to one amply acquainted with Jefferson’s writings.