Review of Andrew Cockburn’s “Kill Chain: The Rise of the High-Tech Assassins”

Jeremy Kuzmarov is author of "The Myth of the Addicted Army: Vietnam and the Modern War on Drugs" (Massachusetts, 2009) and "Modernizing Repression: Police Training and Nation Building in the American Century" (Massachusetts, 2012). 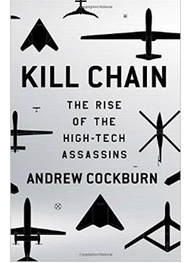 On a cold February morning in 2010, two small SUV’s and a four-door pickup truck crammed with dozens of people headed down a dirt road in the mountains of southern Afghanistan on their way to Kabul to stay with their relatives. Unbeknown to them their every move was being monitored through an unmanned aerial vehicle (UAV) by American military officers sitting thousands of miles away inside an office at Creech Air Force base in the Nevada desert. When some of the women and men got out of the car to draw some water from a river and say a daily prayer, the drone operators in Vegas took it as a sign that they were Taliban and ordered their incineration, killing twenty-three people including two toddlers and severely wounding three more children. An army investigation found the crew’s conduct to have been “almost juvenile in their desire to engage the targets,” though ultimately blamed the special operations command for failing to supervise the operation, with the crew members facing little punishment or censure.

In Kill Chain: The Rise of the High-Tech Assassins, Andrew Cockburn, the Washington editor of Harper’s Magazine, provides a chilling history of American high-tech-warfare and assassination missions and their pitfalls exemplified in this incident dating to the Vietnam War. American policy-makers for decades have been under the illusion that ever-more sophisticated surveillance systems and military weaponry could help to vanquish any foe regardless of the political weakness of American allies and that machines can eliminate the political cost of war by distancing American soldiers and limiting the number of American casualties. By transferring the cost to the local civilian population and causing blowback, however, they have created a recipe for endless war that will over-time bankrupt the U.S.

Cockburn traces the roots of today’s drone warfare to Robert S. McNamara’s concept of the electronic battlefield in Vietnam in which infrared censors ringed along the Ho Chi Minh Trail (infiltration route from North to South that passed through Laos) were hooked to computers that relayed target information to bomber pilots. Eric Herter, the grandson of Eisenhower’s Secretary of State Christian Herter, testified at the Winter Soldier hearings staged by Vietnam Veterans Against the War in 1972 about the devastating consequences of this new kind of war where an “entire culture” was decimated by “an automated electronic and mechanical death machine whose killing was “one-sided, unseen and universal.” Herter was horrified that technicians could push “kill buttons” eliminating even the “tortured bond of humanity between enemies at war.” Under the auspices of the electronic battlefield, he said, “the people of the villages have gone from being ‘gooks’ and ‘dinks’ to being grid coordinates, blips on scan screens, dots of light on infrared film. They are never seen, never known, never even hated. The machine functions, the radar blip disappears. No village is destroyed, no humans die. For none existed.”

Experienced previously by the Japanese and Koreans, the mechanized slaughter described by Herter grew out of a society whose prioritization of technical efficiency and scientific development blunted feelings of empathy and compassion and in which pivotal social institutions (schools, churches, the media) fostered one-dimensional thinking and conformity. By distancing the executioners from the victims, war in the era of the American Century no longer produced the same kind of personal sacrifice or inner psychological anguish as before and could thus be carried on indefinitely.

McNamara’s electronic battlefield concept was tactically failure as the Vietnamese got around the censors by erecting fake decoys and bridges, by sending herds of cattle to simulate troop movement and by dumping human and animal urine to confuse the machines. A symbol of American futility was the failure to destroy the Thanh Hoa Bridge along the Ho Chi Minh trail in 871 bombing missions where 104 pilots were downed. Learning almost nothing from history, Pentagon planners in the 1990s, spearheaded by legendary Yoda-like figure, Andrew Marshall, devised a new revolution in military affairs which sought to reinforce American global military supremacy through development of tomahawk missiles, precision guided munitions supported by Global Positioning Systems (GPS), computerized command and unmanned aerial drone systems, which were made operational in the first Persian Gulf and Kosovo wars. Sophisticated technology stemming from heavy government investment enabled the U.S. to wage war without risking many casualties among its own personnel and claimed to be far more precise than Vietnam. In the Gulf War however, 70 percent of bombs are still estimated to have missed their target and in Kosovo, the Serb resistance followed the footsteps of the Vietnamese by displaying dummy tanks and planting microwave ovens that emitted decoy signals and evaded ground censors. The Serb resistance in turn held out for over 11 weeks, far longer than was originally predicted, abating only when Russia withdrew its support.

The Kosovo War set an important precedent in the use of drones for surveillance and in bombing Serb leader Slobodan Milosovic’s compound. The United States had become more comfortable carrying out assassinations after banning the practice due to the political fall-out from the Operation Phoenix in which 20,000 to 40,000 Vietnamese were estimated to have been killed. Cockburn details how the Clinton administration collaborated with the Cali cartels in knocking off Colombian Mafioso Pablo Escobar who was allegedly shot by a Navy Seal on a rooftop in 1993. The operation was part a failed kingpin strategy whose premise is that a criminal organization can be dissolved by killing its leader when in practice younger and more ruthless leaders always replace their slain boss.

On September 17, 2001, in response to the 9/11 attacks, President George W. Bush signed a secret memorandum giving the CIA carte blanche to hunt down and kill high-value targets in the al-Qaeda leadership, and approved a separate blacklist of targets whom the CIA could kill without further presidential review. Taliban leader Mullah Omar subsequently survived a missile attack that killed his ten-year old son. After the invasion of Iraq in March 2003, the Bush administration selected fifty “high value” Bathists to be assassinated but all survived, with a couple hundred civilians dying in the botched efforts. Defense Secretary Donald Rumsfield was a key champion of drones which were first deployed in June 2004, killing Pashtun militant Nek Muhammed in South Waziristan with several others, including two boys, ages 10 and 16. Targeted killings of Taliban commanders generally resulted in the death of countless innocents from faulty intelligence and led to the emergence of a younger, more ruthless generation of Taliban leaders.

The Obama administration set the tone for his administration just three days after inauguration in ordering two separate drone strikes in North and South Waziristan that killed twenty five people, including as many as twenty civilians among them a member of a pro-government peace committee and his family. For years, Obama finalized execution orders in a Tuesday meeting with the CIA Director, including of a U.S. citizen, radical Yemeni cleric, Anwar al-Awlaki, and his teenage son, Abdulrahman, whom Obama’s White House Press Secretary said should have had a “more responsible father.” According to a rare outside observer, the New York Times journalist David Rhode, held hostage in Northern Waziristan between November 2008 and June 2009, life for the local population under the threat of drones was “hell on earth.” From the ground, he said, “it is impossible to determine who or what they are tracking as they circle overhead. The buzz of a distant propeller is a constant reminder of imminent death. Drones fire missiles that travel faster than the speed of sound. A drone’s victim never hears the missile that kills him.”

These comments provide a powerful testimony about the horrors engendered by American-style techno-war of which the people of Waziristan and Af-Pak are but the latest victims. Cockburn has generally written an outstanding book on the so-called revolution in military affairs and its pitfalls, emphasizing both the terrible human cost and strategic failure bred by the hubris of American policy-makers who think that through sophisticated new technologies they can vanquish an enemy they barely know absent any cost to Americans. Cockburn’s book is most disturbing in its insights into the dehumanizing effects of modern military technology and in chronicling a seismic shift in which war has evolved into a technical exercise run by pilots, programmers and technicians detached from the human consequences of their work.