Review of Jack Ross’s “The Socialist Party of America: A Complete History”

David McReynolds was twice the co-chair of the Socialist Party and the Party’s Presidential candidate in 1980 and 2000. He resigned from the SP. Anyone interested in his reasons can receive his statement by sending an email to: davidmcreynolds7@gmail com. 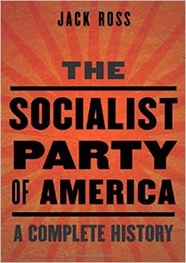 Jack Ross, an independent historian and author of “Rabbi Outcast: Elmer Berger and American Jewish anti-Zionism” has given us an extensive and admirable history of the Socialist Party, which had its roots in the late 19th Century, and began as a split from the “original” socialist party, the Socialist Labor Party. Eugene V. Debs, already a hero for his trade union work, was recruited to the new Socialist Party and Ross notes the role of Protestant ministers, who were a key part of the early SP, and the important role of the Populist movement. So while the early SP contained Marxists, it contained much else. Indeed, Ross takes 78 pages just getting to the first campaign Debs ran (1904), and the background and the range of supporting forces from Populist, Marxist, labor and Protestant ministers.

What was important about the SP was that it was so uniquely an American formation, and that it predated the Russian Revolution. In fact, as Ross points out, its most powerful times came before 1920, when there was a general assumption that the SP might become “a second party” – it had after all elected members of Congress, and run remarkably well in local elections.

Ross gives ample space to the tragedy of the First World War, and the impact that had on the young party. It was, at the same time, one of the proudest and most courageous of moments, but also one of the most costly. The First World War was extremely popular, the “war to end all wars . . . the war to make the world safe for democracy.” Opposition cost the SP heavily. Debs was given a long prison term, other socialists across the country were hounded and persecuted.

Sadly, the war was to lead to the terrible split in the Socialist International. Only two other parties refused to support the war - the Italian Party and the Bolsheviks in Russia. The speed with which nationalism triumphed over international “proletarian solidarity” led to the collapse of the International and, at the international level, a split in the socialist movement between those supported the Russian Revolution and those who sought to remain independent.

Debs had said, at one point, “I am a Bolshevik from the tip of my head to the tips of my toes,” but when Lenin presented his “21 demands”, which would have required the SP to accept the leadership of Moscow, Debs categorically refused.

After 1920, the American Left would be forever divided between a Marxist wing (more precisely a Marxist/Leninist wing) and the democratic socialists led from the 1920's on by Norman Thomas who was nominated for the head of the national ticket in 1928.

With the crash of 1929, the Socialist Party seemed to have a chance at rebuilding some of its mass base but as the world edged closer to war, and with Roosevelt winning the support of labor, that didn’t happen. In 1936 there was a significant split, as the Social Democratic Federation broke away from the SP to support Roosevelt. The war itself ended serious political struggle among socialists of almost any kind, with the irony that the SP’s old enemy, the Communist Party, gained members and influence because it supported the war and the US’s wartime ally, the Soviet Union.

Still, with the Cold War’s start in 1947, the Communist Party became a marginal influence. The SP benefitted from the fact it wasn’t linked to Moscow. However, at last, with the entire American Left weakened, there was finally a discussion within the SP about what to do about what had been an historic (and, one might say, obvious) fact -- the two-party system in the US had made it impossible for any third party to mount an effective challenge.

Ross does well covering a grouping which emerged within the SP made up of “modified” Trotskyists led by Max Shachtman and some of the centrist members of the SP, led by Irwin Suall, who argued that since the Democratic Party was hopelessly torn between the racists which dominated the southern Democrats and the Big City bosses in the North, allied with Labor, what was needed was to “re-align” the two parties, so that the racists in the South would regroup into the Republicans, and the Democratic Party might then be open to a loose socialist caucus .

The catch was the danger of supping with the devil, unless you have a very long spoon. The Realignment folks themselves began to splinter, with Shachtman and his supporter, Michael Harrington, adopting the hard anti-Communist foreign policy line of the Democratic Party hawks. This led the SP in its 1970 convention to pass a resolution giving “critical support” to the Vietnam War.

Internal tensions were too great - the Vietnam War finally tore the SP apart. In 1972, Shachtman persuaded the convention to drop a name that implied an electoral activity (the name at that time was Socialist Party - Social Democratic Federation) and change its name to Social Democrats USA. The extreme anti-Communism of Shachtman and his support for the Vietnam War was too much for Harrington, who departed to form the Democratic Socialist Organizing Committee (which morphed into the Democratic Socialists of America). At the same time perhaps half of the SP, still committed to independent electoral action, split to reorganize in 1973 as the Socialist Party USA, led by Frank Zeidler, the former mayor of Milwaukee.

Ross covers this period judiciously - something almost no one else has done. The great irony is that Shachtman’s group, which had a majority at the 1972 convention, has totally vanished (in many cases directly into the government) while both DSA and the re-organized SP still exist --though if I were writing life insurance policies I wouldn’t issue one to the Socialist Party, which I suspect is on its last legs.

Jack Ross has given us an excellent book. I commend him for it.