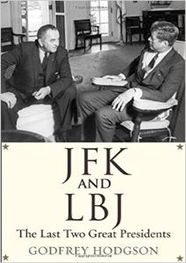 According to Godfrey Hodgson, John Kennedy and Lyndon Johnson were our “last two great presidents” because no-one since has believed the federal government could do very much to help all Americans.

Hodgson, whose take on both men is sharp-eyed and useful, though somewhat flawed by his uncritical admiration for the down-to-earth LBJ, first arrived in Washington from London in 1962 when his newspaper, the weekly Observer, seems to have given him carte blanche to cover a city basking in the aura of Camelot. After eight years of a gray and boring Eisenhower presidency, Jackie’s glamour and John’s PT-109 heroism appeared to Democrats, at least, the start of a new and exciting era.

Hodgson asks two questions about the two men who came to the White House with vastly different backgrounds and experiences, much like comparing apples and oranges, as a critic once pointed out. Had JFK not been murdered, he asks, would he have been able to push through LBJ’s “titanic domestic reforms” such as Medicare, Medicaid, the Civil Rights Act, Head Start, and Federal Aid to Education? And would he have avoided LBJ’s “mistake” –a rather cultivated and civil British way of putting it, as Hodgson does – in sending a half million troops into Southeast Asia and ultimately causing 1.5-3.5 million military and civilian deaths (no one really knows) while pursuing the fiction that the U.S was fighting against invaders and the dangers posed by the Domino Theory, a crackpot hypothesis that a North Vietnamese victory would allow communism to spread throughout Southeast Asia and beyond. Indeed, but for Carter, every administration from Truman to Reagan viewed the Domino Theory as their rationale to stop “communism” in the Third World as well as a crucial way of keeping the dogs of war at home off their backs. As the historian Robert D. Schlesinger has convincingly argued, “Had American leaders not thought that all international events were connected to the Cold War there would have been no American war in Vietnam.”

But why pose these questions now? Because, Hodgson explains, “The proper role of government in American society and the appropriate conduct for America in a complex and angry world are still the top of the agenda of American politics.”

For Hodgson, LBJ’s accomplishments at home were “titanic” compared to JFK’s. In comparison with LBJ, JFK’s domestic accomplishments were inflated and LBJ’s undervalued. He disparages Robert Caro’s magisterial multi-volume biography of LBJ, calling the biographer one who “scarcely conceals his low opinion of the subject” and LBJ’s “least sympathetic biographer.”

Unlike LBJ, JFK never confronted the civil rights battle head-on since his major concern was how it would reflect in the polls until the March on Washington, the murder of the four Black girls and the wounding of 22 others in Birmingham’s 16th Street Baptist Church, and Martin Luther King, Jr.’s jailing in that city rendered it politically and morally impossible to ignore. Nor could JFK ever hope to rival LBJ’s mastery of political tradeoffs, reliance on bribery and threats, courage, and smarmy good fellowship when pushing his pet bills.

In foreign policy, both men were Cold Warriors, men of the WWII generation, when it was Holy Writ to believe unquestioningly that an existential struggle existed between Good and Evil and that it was America’s destiny to battle “aggressors” everywhere. That generation’s leaders’ ideological myopia and rigidity led them to never doubt that the Communist world was monolithically ruled by Moscow and wherever and whenever a leftwing movement appeared, the U.S. was politically and morally bound to intervene one way or another.

Nowhere was this more evident that in the Kennedy brothers’ obsession with eliminating Castro. Soon after the botched Bay of Pigs escapade, in 1961, the Kennedys had the CIA develop Operation Mongoose, a secret program aimed at killing Castro and driving the Communists out of Cuba. The Cuban Missile Crisis was an event that sooner or later had to happen.

It was that terrifying event which Robert McNamara later admitted in
“The Fog of War” documentary film brought nuclear war closer than anyone outside JFK’s tight inner circle realized. Hodgson praises JFK’s role in resisting pressure to bomb Cuba and organize a naval quarantine—an act of war. But he does note that the White House staff and especially RFK created the myth that he coolly faced down Khrushchev, looked him in the eye, and dared him to start a fight. Actually, a back channel Russian concession to settle the issue was eagerly accepted by the U.S. It required the removal of outdated American missiles from Turkey and more potent Russian missiles from Cuba. I remember standing near the Isaiah Stone at the UN on the very day a Russian ship carrying missiles for Cuba turned back and a crowd of relieved Americans erupted in cheers. The truth is that JFK and Khrushchev were deeply alarmed by the Cuban crisis. They “had looked over the edge which opened into the nuclear abyss,” writes Hodgson, and experienced “the cold dread of realizing that their actions could unleash the ultimate horror. In their different ways, each drew the same conclusion: nuclear war must be made impossible.”

Would JFK have committed a half million troops to the Vietnam War? Hodgson thinks he would have done as LBJ had, given the fact that he and his advisors, plus his influential hardline brother, were convinced cold warriors. But others, also close to JFK, and notably Gordon Goldstein, McGeorge Bundy’s amanuenses, researcher and ghost writer, whose “Lessons in Disaster: McGeorge Bundy and the Path to War in Vietnam” based on the pro-war Bundy’s notes and recollections, concluded otherwise. Obviously, we’ll never know.

What Hodgson does well is describe a largely undetected political earthquake that, as late as 1968, had many pundits mistakenly viewing the New Left and Black Power as permanent fixtures. What was missed was the anger felt by many working and lower middle class whites who saw themselves as victims of “reverse discrimination” overlooked by LBJ’s civil rights triumphs. In 1968, the symbol of their resentment, George Wallace, ran on a platform of “law and order,” and pro-segregation and drew a surprisingly large white vote in Northern and Midwestern states, the traditional home of Democratic Party loyalists.

The Wallace vote meant that many whites abandoned the Democratic Party and would eventually turn into Reagan Democrats. When in 1972 Nixon won by a landslide over the antiwar liberal George McGovern, it marked the end of FDR’s New Deal and LBJ’s hope that his Great Society would see a rebirth. It was then that Ronald Reagan preached that the federal government was our enemy, the same Reagan who opened his presidential campaign in Philadelphia, Mississippi, not far from where Michael Scherer, Andrew Goodman and James Cheney had been killed by the town’s racists. Then Reagan’s PR gimmick, the “Morning in America” catchphrase, went viral. Democrats were cowed. The Conservative Revolution had arrived. and JFK and LBJ were history.

Still, like most 20th Century occupants of the White House save, arguably, FDR, JFK and LBJ and their successors were men of limited capacity when it came to resolving questions of war and peace and establishing economic and racial justice at home. JFK, and LBJ especially, tried to deliver “guns and butter” but could not. It’s a mixture that doesn’t work.