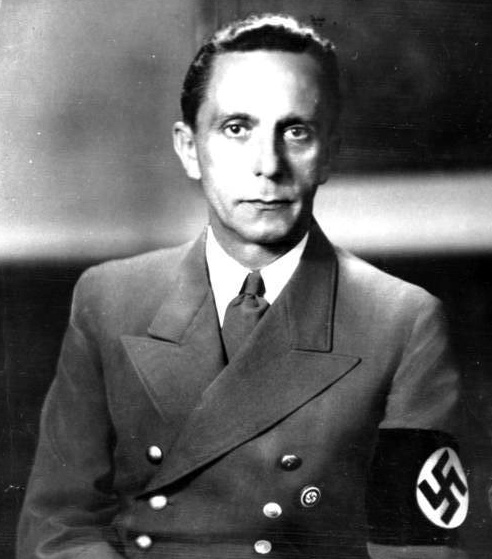 Most Americans do not know much about all of the Nazi propaganda films produced and released throughout Germany during the menacing days of the Third Reich. Adolf Hitler’s head of propaganda, Joseph Goebbels, was in charge of the movies and became a cinematic wizard for his boss. He oversaw many well-known propaganda films, such as Leni Riefenstahl’s Triumph of the Will, Jew Suss and Kolberg. Altogether, 1,200 films were made in Germany from 1933 to 1945. There are still 40 very offensive films that are not allowed to be shown publicly (except at scholarly events). Now clips of them have been spliced together in a bristling new documentary, Forbidden Films: The Hidden Legacy of Nazi Film.

The documentary opens Wednesday at the Film Forum, in Manhattan, and will run for a week. Tickets, subsided by the Ostrovsky Family Fund, are free. There are numerous screenings each day.

Forbidden Films, a Zeitgeist Films release, in German with English sub-titles, never shown in the U.S. before, shows snippets of the propaganda films, that not only targeted the Jews, but British, Poles and French as well. It also chronicles discussions among many audiences that saw them in Europe on whether or not, after all these years, the Nazi films should ever be shown in public. One side argues that they represent freedom of speech and that many are shown on the Internet anyway, so why not screen them in theaters across Europe and in America? The other side argues that their strong anti nations and anti-Jewish tone would inspire neo-Nazis in the audiences to riot and seek out the same victims that Goebbels and his henchmen went after 80 years ago. They could trigger even more anti-Israeli sentiment.

The director of Forbidden Films, Felix Moeller, is not sure what would happen if the movies are released. “Are they nothing but historical documents at this point or still effective ideological messages? There’s no simple answer. I also thought that 70 years after the end of World War II they couldn’t possibly still upset anyone that much, but then, during the many projections and audience discussions in Germany and abroad, I noticed that there’s still quite a bit of poison in them,” he said in a statement.

The films were all made to get German audiences - and the German film going public in the Hitler years was enormous - to hate the Brits, French, Poles, Jews, Russians and anyone else Goebbels and his men took aim at. Goebbels’ quotes are sprinkled through the film and they all back up his theory that film was the strongest way to sway the people.

In all of the films, the enemy (pick a country) is a horrific abuser of power who takes out its venom on the poor Germans, all victims to the end. Example, in The Homeland the Poles terrorize Germans living in Poland and depict the Jews of Poland as filthy, corrupt, greedy thugs. The Eternal Jew shows Jews as hostile pigs that are in the way of world Aryan domination. The scary movie ends with Hitler proclaiming the eventual annihilation of the Jews in 1939.  The Great Love is the story of a Gary Cooper-ish Luftwaffe pilot and his beloved woman, who try to survive the hell of the war, brought on by the rest of Europe. The films beg for the Third Reich to avenge this and it does. The Reich’s brutal invasion of Poland, then, is not seen as an attack, but justifiable retribution. All of the films about the Jews show them as rich, spoiled, evil oppressors who have been pushing good Germans around for years and need a stiff rap on the knuckles. In a film about the Hitler Youth, a Hitler teen is abused by his father. In a film about the Rothschilds banking family, the Jewish Rothschilds are all seen as greedy Jews intent on taking over the world, with only the Third Reich there to stop them. Among the more interesting narrators are Oskar Roehler, Moshe Zimmerman and, especially, Margarethe Von Trotta.

Today, the films seem absolutely ludicrous, but German audiences in the 1930s must have seen them as heaven sent. Finally, they must have thought, the Fuehrer is letting the truth come out about the Reich’s enemies.

Many in the documentary argue that the propaganda films should be studied, like Mein Kampf is studied, and others fear that skinheads and terrorists will be moved to attacks by them. There are numerous people who discuss the films after screenings and you will be amazed at the wild ideas they come up with.

It is hard to really understand the controversy over the films if you are an American, but if you live in Europe you can see clearly what a sensitive issue this is. Even so, in America we had the racist 1915 film, The Birth of a Nation, that, like the Nazi propaganda movies, is never shown except at film society meetings or in college film classes.

The documentary is well done and the small footage from each of the 40 films that you do see underscores how successful these films must have been. They are very well made, full of inspirational music and start many of Germany’s most noted actors. Skilled directors like Emil Jannings made some of them. The trouble with Forbidden Films, though, is that at 94 minutes it is a good 20 minutes too long and, in the second half, gets bogged down in endless chatter among experts pontificating over the value of Nazi propaganda. Moeller should have stuck to his basic plan – a good hard look at banned films, and avoid the rest. Forbidden Films is a documentary that Word War II aficionados and Nazi haters should see, but it is a bit long winded and has some sections, like one on Euthanasia, that could be trimmed or just junked.

The film does stir an argument, though. How far does free speech go? Oliver Wendell Homes once famously said that free speech does not permit you to yell “fire” in a crowded theater. Does it also allow you to give the Nazi salutes, shout “Sieg Heil” and then sit back for a screening of a disgusting anti-Semitic movie?