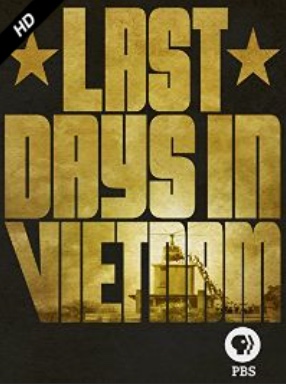 Seeking to shake America from what he perceived as the doldrums of the Vietnam Syndrome, Ronald Reagan described the American intervention in Vietnam as “a noble cause.” Rory Kennedy, the daughter of Robert Kennedy who initially supported the war in Vietnam before emerging as one of its major critics, has seemingly embraced Reagan’s perception of the conflict in her Academy Award-nominated documentary Last Days in Vietnam, which was aired by the Public Broadcasting System on April 28, 2015; marking the fortieth anniversary of the fall of Saigon to the communist North Vietnamese forces.

For her film, Kennedy selected one of the moments from the Vietnam War about which many Americans, both supporters and opponents of the conflict, often express shame. As Americans unceremoniously fled from Saigon before the advancing North Vietnamese, they abandoned their South Vietnamese allies to the communist victors who would extract revenge from those Vietnamese who had faithfully served the Americans. The image that comes to mind for many Americans is that of helicopters extracting diplomats, soldiers, contractors, and their families, while ordinary South Vietnamese, fearing for their lives, desperately try to board the helicopters and cling to them as the aircraft leave the ground. Kennedy has taken this image of defeat and turned it into a demonstration of American heroism and goodwill under the most difficult of conditions. Last Days in Vietnam presents the evacuation of Saigon as representative of the American experience with Vietnam in microcosm. The Americans are well intended, but their implementation of the evacuation, similar to most of the war effort, is simply not well executed and goes awry.

The historical context for the collapse of the South Vietnamese government, however, is never adequately explained. The complexities of the Vietnam War are reduced to the good guy Americans and their South Vietnamese allies against the evil communists from the North. The film chronicles that the Paris Accords of 1973 provided for a ceasefire and American withdrawal from Vietnam. The United States hoped that a stable South Vietnamese government would evolve similar to the situation on the Korean peninsula. President Richard Nixon even promised South Vietnamese President Nguyen Van Thieu that the United States would re-enter the conflict if the North violated the peace accords. However, the Nixon administration became distracted with the Watergate scandal, and North Vietnam took advantage of the situation to launch an invasion aimed at toppling the government in the South. The documentary proceeds to blame the poor performance of the South Vietnamese Army on the lack of support from the United States. The South Vietnamese are depicted as lacking the military hardware to resist the invasion, and Congress is blamed for not approving the aid package President Gerald Ford was finally convinced to request for America’s beleaguered ally. Yet, this limited perspective fails to account for the poor performance of the South Vietnamese Army when American aid seemed unlimited and over a half-million American troops were stationed in the South. Last Days in Vietnam does not really explain that the government in Saigon never captured the hearts and minds of its own people. Kennedy’s film fails to point out that the National Liberation Front and communist insurgency enjoyed considerable support among the South Vietnamese people.

While the corruption and the consistently poor military performance of the South is largely ignored, the North Vietnamese are portrayed as a murderous force intent on taking revenge on their fellow countrymen in the South. The film points out the murders conducted by the communists in Hue when they gained control of that city during the Tet Offensive. Thus, the documentary maintains that the South had good reason to fear a massacre if the North were victorious. Nevertheless, these fears failed to make the South Vietnamese into a viable fighting force. This focus upon the North Vietnamese also fails to take into account the complexity of the American military presence in Vietnam. While the United States lost over 50,000 troops in the war, approximately two to three million Vietnamese were killed, and the vast majority due to American military actions. With a strategy based upon the use of body counts, cluster bombs, napalm, search and destroy missions, the relocation of civilian populations, the assassination of officials deemed to be communists, and free fire zones, the United States wreaked havoc on the Vietnamese people and environment. The context of atrocities such as the My Lai Massacre and the American bombing campaign, in which approximately three times as many bombs were dropped on Vietnam as were unleashed upon the Axis nations during World War II, is missing from Last Days in Vietnam.

While the documentary ignores the destructive force of the American military mission in Vietnam, there is criticism of America’s failure to adequately plan for an evacuation of Americans and their Vietnamese allies from Saigon. Much of the blame for this lack of preparation is placed upon the American ambassador to South Vietnam, Graham Martin. Since many of the military and intelligence officers interviewed for the film believed that Martin was moving too slowly, they often initiated their own evacuation strategies. Martin, however, is also defended for his devotion and belief in an independent South Vietnam, and it is noted that he lost a stepson in Vietnam. Thus, similar to many Americans, he could not abandon a cause for which his family had so greatly suffered.

However, when it became apparent that Saigon would fall, the Ambassador authorized an evacuation in which the Vietnamese who had entered the embassy would be rescued as well as Americans. After an approximately twenty-four hour helicopter airlift, the Ambassador was ordered out, but over four-hundred Vietnamese promised evacuation from the embassy were abandoned. This order came from President Ford and Secretary Kissinger, angering many Americans on the ground distraught over the failure to fulfill their promise to the Vietnamese. This segment near the end of the film is reminiscent of later charges that the war could have been won only if the politicians back in Washington did not tie the hands of military officers.

In conclusion, Last Days in Vietnam depicts an ill-prepared evacuation which abandoned many loyal Vietnamese, yet heroic American soldiers and diplomatic personnel, along with their Vietnamese allies, succeeded in rescuing thousands of Vietnamese refugees from the clutches of the North Vietnamese. In the documentary’s epilogue, Kennedy acknowledges the heroic measures many Americans, such as Richard L. Armitage, took to save Vietnamese lives. She also observes that several of her Vietnamese witnesses were unable to escape and spent time in communist re-education camps, noting that several hundred thousand South Vietnamese perished at the hands of the victorious communist government. Omitted from this conclusion is any reference to American atrocities. Essentially, the film portrays the American experience in Vietnam as a noble crusade to rescue the Vietnamese people from communism. Thus, Last Days in Vietnam is similar to the 1950s writings of Navy doctor Tom Dooley that the exodus of Vietnamese from the North was due to communist atrocities and efforts to eradicate Catholicism; an interpretation which ignored the fact that most Vietnamese were Buddhists who would lead a revolt against the repressive policies of Ngo Dinh Diem in South Vietnam. This is the same rescue fantasy that characterizes John Wayne’s The Green Berets (1968) when Colonel Kirby tells the Vietnamese youth Ham Chuck that he will be taken care of by the Americans. But the harsh reality of the Vietnam War was far more complex, and commemorating the conflict by depicting the war as a noble cause in which Americans were saving the Vietnamese people from communism does little to help the nation cope with what really happened to America and its ideas in the jungles of Southeast Asia. Last Days in Vietnam is an intriguing look at the fall of Saigon, but it is often quite misleading in its larger depiction of the Vietnam War and its meaning.