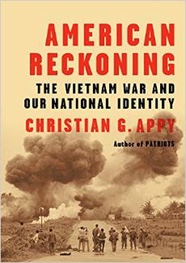 Not another history of the Vietnam War, Christian G. Appy’s American Reckoning examines how the conflict sheds significant light on the American character. While the armed forces seek to celebrate the fiftieth anniversary of the war in Southeast Asia by focusing upon the Americans who fought in Vietnam supporting what Ronald Reagan labeled as a noble cause, Appy, a professor of history at the University of Massachusetts Amherst, argues that the Vietnam War shattered the myth of American exceptionalism. Despite a long national history of slavery, racial discrimination, and territorial expansion at the expense of indigenous people, Appy observes that during the Cold War the concept of American exceptionalism was rarely challenged until Vietnam exposed the gap between the rhetoric and reality of American foreign policy and history. It is a thesis which will antagonize many Americans, but it is imperative to consider the arguments presented by Appy if we are to come to grips with the Vietnam War and its legacy for the twenty-first century.

Concentrating upon the career of Navy doctor Tom Dooley, Appy notes that the American intervention in Vietnam was initially portrayed as an effort to rescue the Vietnamese people from the evil of communist aggression. However, Dooley gave the false impression that Vietnam was primarily a Catholic country and the people hostile to the Viet Minh. The United States ended up supporting the corrupt Diem regime that repressed the majority Buddhist population. Appy also devotes considerable attention to the Munich analogy in which American politicians described the Vietnamese communists as similar to Hitler in a desire for world domination. However, Appy perceives the conflict as more of a civil war in which Vietnamese living in the South, and supported by the communist regime of Ho Chi Minh, attempted to topple a repressive government. Foreign aggression from the outside was primarily introduced by the United States in terms of napalm, cluster bombs, kill ratios, relocation of populations, and search and destroy missions.

This aggressive militaristic policy in Vietnam was a product of fear according to Appy as liberals such as Lyndon Johnson remained afraid that failure in Vietnam could trigger another wave of McCarthyism in the United States and endanger the President’s Great Society. These domestic political considerations, argues Appy, were tied to the idea that to maintain its international prestige and reputation the United States must fight in Vietnam. Also associated with American perceptions of masculinity, Appy concludes that Vietnam was no quagmire into which innocent Americans were pulled, but rather a conscious and premeditated decision to employ force. In developing this political and cultural argument, Appy does not ignore the economic incentives Vietnam provided for many military contractors such as the Brown and Root construction company which later became Halliburton. But Appy is hardly an economic determinist, observing that many American businesses eventually opposed the war as bad for the nation’s economy.

American exceptionalism was celebrated in the heroic image of the Green Berets and popular songs such as Barry Sadler’s “The Ballad of the Green Berets,” but the reality of the war in Vietnam soon erased this image with atrocities such as the My Lai Massacre. Rather than an elite fighting force, the United States in Vietnam relied upon a draftee army in which minorities and the working class were overrepresented; sparking a resistance movement within the military. Appy also notes the dependence of the United States upon air power, but the historian documents that the Americans dropped far more bombs in South Vietnam than the North; supporting the argument that the greater threat to the American-backed government was the homegrown guerrillas of the South rather than North Vietnam.

Despite this massive demonstration of air power, America could not win the war; convincing some critics that politicians and protestors failed the troops. During the decades following the war in Southeast Asia, American veterans were increasingly portrayed as the primary victims of the war, who risked their lives but were not honored by their country. There was little attention paid to the millions of Vietnamese who died in the conflict, as American politicians and popular culture concentrated upon supporting the returning soldiers or searching for elusive prisoners of war allegedly still held captive by the Vietnamese. Thus, the Vietnam War’s legacy became a story of American victimhood. Appy writes, “The common denominator was this: an innocent America and its people had become the victims of outrageous, inexplicable foreign assaults. These attacks, whether from rogue nations, terrorist groups, or religious extremists, were broadly viewed as barbaric hate crimes with no clear motive or American provocation” (227). This perception of American innocence was used to explain the Iranian hostage crisis, Gulf War, the terrorist attacks of 9/11, and invasions of Afghanistan and Iraq.

In response to the moral ambiguities fostered by the Vietnam War, Appy insists that many Americans have embraced a new sense of blind patriotism in which one is to obey and serve but never ask questions. The lesson of Vietnam for many conservatives is that the war was lost on the home front when dissenters and politicians failed to support the troops. Yet, the contemporary emphasis upon militarism in American culture is based upon a rather narrow base and may suggest that the resurgence of American exceptionalism is fragile. The contemporary voluntary army draws upon a limited percentage of the nation’s population, and while many may thank military personnel for their service, few are actually willing to volunteer, and one of the lessons which both liberals and conservatives seem to draw from Vietnam is that in future conflicts we must limit American casualties in order to curtail possible dissent. Thus, Reagan pulled the Marines from Lebanon and employed proxies in Central America, George H. W. Bush orchestrated a broad coalition in the Gulf War, Bill Clinton relied upon air power in Yugoslavia, George W. Bush assumed there would be little resistance to the invasion of Iraq, and Barack Obama prefers to rely upon drones.

Appy concludes that the persistence of American exceptionalism is a danger to the nation’s democratic traditions, asserting, “As long as we continue to be seduced by the myth of American exceptionalism, we will too easily acquiesce to the misuse of power, all too often readily trust that our force is used only with the best of intentions for the greatest good. If so, a future of further militarism and war is virtually guaranteed. Perhaps the only basis to begin real change is to see the fuller reckoning of our role in the world that the Vietnam War so powerfully awakened—to confront the evidence of what we have done” (335). Appy makes a powerful case for Americans to carefully examine the Vietnam War and its legacy—for the experience in Southeast Asia surely raises serious questions about the limitations of American power and the myths of national innocence and exceptionalism. While the war seemed to rip asunder the post-World War II consensus and notions of American exceptionalism, assertions of American nationalism and militarism have made a significant resurgence in recent years. While disillusionment over Vietnam certainly contributes to questioning the credibility of government, the great exception to limitations upon the power of the state remains the military and issues relating to national security. New standards for the American History Advanced Placement test are criticized for ignoring American exceptionalism, and it seems unlikely that any American presidential candidate who questions the notion of national exceptionalism could be elected to office. It would be the equivalent of stating that one does not believe in God. Appy’s book is a provocative read and presents a convincing argument regarding the Vietnam War as exposing the myth of American innocence. Yet, the concept of American exceptionalism continues to exercise a strong hold upon the nation’s belief system, and the fiftieth anniversary of the Vietnam War may not provide the national reckoning so passionately called for by Appy.