Review of Shlomo Avineri’s “Herzl's Zionism: Theodor Herzl and the Foundation of the Jewish State”

Ralph Seliger was the editor of the now-defunct “Israel Horizons” magazine and is now the editor and co-administrator of the Partners for Progressive Israel Blog. 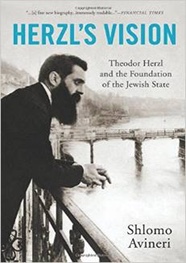 Theodor Herzl was an unlikely prophet: a very secular and liberal Jewish intellectual from the 19th century world of Austria-Hungary who created political Zionism. He is remembered for an astonishingly accurate prediction that the World Zionist Congress he founded in Basle, Switzerland, in 1897, would bring about a Jewish state 50 years hence (technically, he was off by one year).

The entity established then, the World Zionist Organization, still exists. Although the WZO is a shadow of what it once was, 30 countries still send delegates to its supreme policy-making body, the quadrennial World Zionist Congress. (I happen to be a candidate for election on the Hatikvah Progressive slate to the 37th World Zionist Congress, to convene in Jerusalem in October.)

Since Herzl's story has been told innumerable times, what would make this biography by Shlomo Avineri worth reading? First, it’s by an eminent political theorist, who has published a number of works on Marxism, socialism and Zionism, and happens to be the editor of three published volumes of Herzl’s diaries. For another, Prof. Avineri has also acted in the “real world” outside of academia, as director-general of Israel's Ministry of Foreign Affairs during Yitzhak Rabin's tenure as prime minister in the early 1990s. Avineri ably captures the historical currents and personal influences that motivated this pivotal historical figure.

As a well-educated Hungarian Jew who migrated with his parents from Budapest to Vienna at the age of 19, Herzl was well aware of the growing anti-Semitic intellectual and political climate in Central Europe. He was familiar with the writings of Wilhelm Marr, who coined the term “anti-Semitism,” and the racist anti-Semitic theorizing of Eugen Dühring; of one of Dühring’s books, Herzl wrote: “a despicable book ... unfortunately written with great talent.” In 1895, the mayor of Vienna was elected by universal male suffrage for the first time. When an openly anti-Semitic candidate won, the Emperor Franz Josef repeatedly refused to certify his victory, forcing new elections, until this candidate's continuing electoral triumphs finally forced the Emperor to relent.

After achieving limited success as a playwright, Herzl found his niche as a journalist-—a foreign correspondent and later as an editor-—for a liberal Viennese newspaper with a heavily Jewish readership, the Neue Freie Presse. Herzl witnessed at first hand the stirrings of particularist ethnic nationalisms of the Austro-Hungarian Empire that increasingly viewed the newly-liberated de-ghettoized Jews of Europe as an alien and threatening “other.”

It is popularly understood, even from his own public writings, that Herzl was persuaded of the urgent need for Jews to find refuge outside of Europe because of the infamous Dreyfus Affair, which he reported on personally. But on the basis of his diaries, Avineri reveals that prior events and circumstances had already converted Herzl to the Zionist cause.

Although very much a modern liberal with non-Marxist socialist leanings, Herzl worked tirelessly in his few years as the leader of the new Zionist movement-—from 1896 to his death in 1904—to secure a Great Power patron. His constant maneuvering and lobbying with influential contacts, ministers of state (including obvious anti-Semites), heads of government and several monarchs makes for some vivid episodes—including how he contrived to meet the German Kaiser in Palestine. But he kept on running into dead-ends, and undoubtedly compromised his health to the point of hastening his death at 44.

One such dead-end that is little known was a plan to establish an autonomous Jewish refuge in the Sinai Peninsula, centered on El-Arish. There were huge political complications, but what rendered the scheme impossible was an insurmountable engineering problem—securing enough water within this desert for a large population.

Herzl’s first Zionist work, Der Judenstaat (“The Jewish State”), a pamphlet published in 1896, outlined a new direction for Zionists to work for a legal charter from the ruler of the Ottoman Empire, the Sultan, so that a foothold could be secured more firmly and rapidly than the very gradual colonizing effort that had begun in the 1880s. But first and foremost, Herzl’s goal was to secure a place—any place—where European Jewry could find safety. Palestine was not his priority until the Zionist Congress rebelled and nearly overthrew his leadership when he suggested that they seriously consider a vague British offer for a colony in what was then called Uganda.

His vision for Palestine was further laid out in a laughably melodramatic futuristic novel called Altneuland (“Old-New Land”). In it he outlined a utopian society designed and enriched by the most advanced means of social planning and cooperative enterprise. He envisioned a future Jewish state that provided equal rights of citizenship to its Arab and other non-Jewish inhabitants, and where religious practices and symbols were observed in a spirit of harmony and tolerance. Indeed, in a plot rife with coincidences and preachy dialogue, a character who heads a party running on a racist anti-Arab platform is soundly defeated in a democratic election.

From our perch in the future that Herzl could only begin to imagine, we may see a sad irony in this plot development, considering the real-life events we’ve just witnessed in which an Israeli prime minister won re-election by rallying Israelis to vote their fears and their prejudices.

Avineri wrote this biography well before the March 17 election, but he knows of his country’s imperfections. He observes in his long closing paragraph: “Those who seek to close the gap between today’s Israel and Herzl’s vision, to turn the sometimes flawed terrestrial Israel into a heavenly Altneuland, would do well to take to heart Herzl’s insistence on human agency … : ‘If you will it, it is no dream.’ ”