Review of Barry Eichengreen’s “Hall of Mirrors: The Great Depression, the Great Recession, and the Uses – and Misuses – of History” 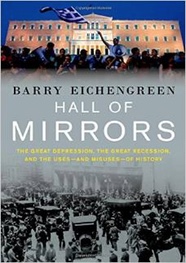 Economists and journalists have published numerous books that attempt to explain the financial crash and Great Recession of 2008-2009. In Hall of Mirrors Barry Eichengreen breaks new ground with a wide-reaching comparative perspective. Eichengreen asks if policymakers learned much from the history of the Great Depression when responding to the recent challenges. He reveals that some leaders in the United States and Europe gained insights from their understanding of the Depression, but they also stumbled badly when seeking remedies to the Great Recession. Economic recovery occurred at a disappointingly slow pace in the United States, and it was more lethargic in Europe. Millions of Americans and Europeans suffered unnecessarily, Eichengreen suggests, because their economic and political leaders failed to heed lessons from history.

One of those lessons concerns the vigorous response to market breakdowns created by President Franklin D. Roosevelt and his administration. Economic conditions had turned so dire in the United States by the time of Roosevelt’s first inaugural that many Americans were willing to support bold action by Washington. FDR’s New Deal promoted a strong role for the federal government in regulating business affairs and promoting economic growth. In recent times, however, the political situation did not allow such vigorous federal intervention. Economic decline during the Great Recession was of shorter duration and was less severe. When U.S. markets began to recover in 2009, there was not much political support for radical adjustments. Reforms promoted by the Obama administration, such as the Dodd-Frank Wall Street Reform and Consumer Protection Act, came under fierce opposition. Business leaders and their lobbyists in Washington succeeded in watering down many of the new rules.

Policymakers in the United States learned enough from the history of the Great Depression to prevent a lengthy economic and social calamity like the Depression of the Thirties. Responding vigorously at first to the crash and deep recession, the administrations of Presidents George W. Bush and Barrack Obama and members of the Congress and Federal Reserve backed measures that aided a business rebound. For instance, the American Recovery and Reinvestment Act (President Obama’s “stimulus” plan) speeded the recovery, as did “quantitative easing” by the Federal Reserve that increased the money supply, reduced interest rates, and buoyed investors’ confidence. The Great Recession was painful (unemployment reached 10% in the United States), but its impact was not as large as during the Great Depression, when unemployment reached 25%.

Unfortunately, the U.S. recovery sputtered in 2010 and beyond. Eichengreen blames defenders of “austerity” for some of the troubles. Opponents of strong governmental intervention won elections by exploiting public anger over the bailouts of large corporations. These champions of austerity wanted reduced government spending and balanced budgets. Their remedies clashed with the lessons of history, argues Eichengreen. In the 1930s, the practice of austerity made conditions worse. Governments need to fill the void when fearful business leaders and consumers leave the marketplace. “[Government] can lend when banks don’t,” Eichengreen points out. “It can substitute its spending for that of households and firms. It can provide liquidity without risking inflation given the slack in the economy. It can run budget deficits without creating debt problems, given the low interest rates prevailing in subdued economic conditions.” [p. 6]

Eichengreen recognizes that FDR’s administration was inconsistent when confronting the Depression, but the New Deal’s public works programs and other measures provided enough help to get the economy moving again. Between 1933 and 1937 real growth in the U.S. domestic product (GDP) averaged 8 percent. Between 2010 and 2013, when the politics of austerity dominated decision-making Washington, GDP expansion averaged only 2% annually.

In recent years the Europeans were even more committed to orthodox economic policies, and their recovery was less impressive. The Europeans, lacking a powerful bank supervisor and troubled by the complexities of winning consensus from leaders in diverse countries, were ineffective when responding to economic problems. Unemployment reached 25% in Spain, 18% in Portugal, and 15% in Ireland. European politicians and leaders at the European Central Bank acted like U.S. officials in the 1920s, notes Eichengreen: often they made the wrong moves when dealing with a financial crisis. German leaders were especially influential in backing mistaken policies during the Recession. Deeply influenced by their country’s experience with hyper-inflation in the 1920s, they demanded balanced budgets and radical cuts in public spending, policies that deepened the European slump.

Throughout his study, Eichengreen compares experiences in the Great Depression and the Great Recession that suggest lessons for economists and historians. One of these intriguing parallels relates to financial meltdowns that followed the collapse of major banks. Just two weeks before FDR took office in 1933, the Guardian Group of banks began to collapse. Leaders at the Reconstruction Finance Corporation (RFC) were reluctant to bail out this systemically important institution, because they had previously received much criticism for rescuing Central Republic, another large bank. They allowed Guardian to go under. A run by depositors followed, and then came a chain reaction of bank failures across the country. Related problems occurred in September, 2008 when officials at the Treasury Department and Federal Reserve chose not to rescue Lehman Brothers. Those officials were hesitant about a bailout, because they had been criticized a few months earlier for rescuing Bear Stearns, another large investment bank. In the immediate aftermath of Lehman’s collapse, the U.S. financial system was vulnerable to a meltdown. Evidence from the 1930s and recent times suggests that bailouts can provoke a harsh political backlash, yet sometimes are necessary to prevent a systemic collapse.

Barry Eichengreen offers many strong-minded judgments in Hall of Mirrors. He lambastes the defenders of “outdated dogma” (p. 2) and criticizes the “naïve belief [in the 1920s and recent times] that policy had tamed the [business] cycle” (p.3). Eichengreen demonstrates that lack of regulation in the 1920s and the early 2000s created opportunities for reckless speculation and financial abuses.

Eichengreen challenges scholarship that has long been influential in the economics profession. He raises tough questions, for instance, about a famous study that has long been a favorite of orthodox economists and political conservatives, A Monetary History of the United States, 1867-1960 (1963) by Milton Friedman and Anna J. Schwartz. Friedman and Schwartz attributed the Depression, in large part, to mistaken actions at the Federal Reserve. Leaders at the Fed raised the discount rate and the reserve rate, actions in the Twenties and the Thirties that contracted the money supply. Friedman and Schwartz also criticized the Fed for failing to serve as a lender of last resort for troubled American banks. Eichengreen recognizes the value of insights by Friedman and Schwartz, but he probes deeper. Citing new scholarship that questions some conclusions in A Monetary History of the United States, 1867-1960, Eichengreen characterizes the Friedman/Schwartz thesis as an inadequately nuanced explanation for the crisis of the 1930s.

Eichengreen delivers a much broader perspective on the recent crash than other investigators. He makes that valuable contribution by addressing the subject uniquely, asking what we have learned and failed to learn from the record of the Great Depression. His investigation offers many useful hints about ways policymakers can avoid repeating the mistakes of the past.