Murray Polner is a blogger, writer, and HNN Book Department Editor and co-author-editor (with Thomas Woods, Jr.) of “We Who Dared Say No To War.” 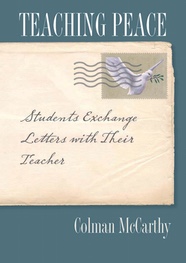 Can teaching peace and nonviolence to students make a difference in their lives? Colman McCarthy, who spent three decades as a Washington Post columnist, has certainly tried in his own very unique way by persuading school boards and principals to hire him as an unpaid volunteer teacher of “peace studies.” His motivation: “Unless we teach them peace, someone will teach them violence.” His new book, “Teaching Peace: Students Exchange Letters with Their Teacher,” is riveting and a real gem, filled with insights gleaned from the thousands of letters he’s received from former students. In it, he explains how and why he went about it, enduring skepticism and praise, criticism and admiration.

Given that “teaching peace” encourages critical thinking it tends to alarm timid school boards and provoke opposition from local pressure groups. Obviously it’s not easy to challenge beliefs, patriotism and legendary heroes, any one of which is guaranteed to shake up a good many people and institutions. It’s much easier and simpler to teach about wars, military and political leaders and unquestioned support for the flag than debating alternatives. Why did Japan attack Pearl Harbor? Were Vietnam and Iraq avoidable? Were there other options that might have cost fewer lives? Are Edward Snowden and Chelsea Manning whistleblowers or traitors? Does capital punishment lead to fewer murders? Are we still a racist nation or have things changed since Obama’s election? And why kill animals for food?

Colman McCarthy believes teaching about peace and nonviolence at home and abroad is worthwhile. A radical pacifist and nonviolent activist, he initially volunteered in a Washington inner city school thirty years ago. It had fewer than 300 students, “no auditorium, no gym, no cafeteria, no lockers, no athletic field and for a time, no safe drinking water.” He never abandoned Woodrow Wilson High’s School without Walls but later branched out as well to privileged, wealthy suburbia and began speaking and teaching at colleges and universities. Freedom from newspaper deadlines has allowed him to teach what many Americans reject or at least believe impossible to put into play.

“Teaching Peace” (also a website) allows us to understand how he has proceeded and how much of what he imparts—not by dominating pronouncements but rather by the Socratic Method and his version of “Show and Tell.” There is no homework, no tests, no papers to write, and no grades. Reading, though, is essential, and since 1982, he has introduced thousands of students to writers they rarely encounter: Dorothy Day, Mohandas Gandhi, Leo Tolstoy, Peter Kropotkin, Emma Goldman, Dan Berrigan, Howard Zinn, Helen and Scott Nearing, Gene Sharp and more. He doesn’t lecture but, he explains, encourages students to ask questions and also question authority, as that hoary ‘60s slogan went. He teaches about war and peace, yes, but also the treatment of animals and women, the Cold War and our post-911 nation security and militarized state. Very opinionated, he says he welcomes challenges and clashes of opinions. He invites guests —corporate and public interest lawyers, pacifists and war veterans, conscientious objectors and pro-draft people, judges, innocent men freed after years spent on death row, Nobel Prize winners, nurses and doctors who serve the poor and most vulnerable among us.

He’s always had critics. In a Maryland high school two students wanted his course dropped. “I do recognize that it is a fairly popular course,” one of them told the Washington Post, “but it’s clear that the teacher is giving only one side of the story. He’s only offering facts that fit his point of view.” McCarthy answered, “I never said my views are right and theirs were wrong. In fact, I cherish conservative dissenters. I wish I could get more of them in.” The course was given a green light.

“We adopted a motto for the course. Instead of [merely] asking questions, be bolder and question the answers. What answers? Those that say violence. Those that say if we kill enough people, drop enough bombs, jail enough dissenters, torture enough prisoners, keep fighting fire with fire, and not with water, we’ll have peace forever.” That’s vintage McCarthy—no middle ground with war and violence.

In one of the letters he received, Meredith Beardmore wrote that she and her classmates were invited to hear Andrew Card, George W. Bush’s Chief of Staff, speak. Should she attend and miss his class? McCarthy held nothing back. “If you want to subject yourself to a governmental functionary working for a president who believes that violence is necessary and moral then go hear Andrew Card. I’d bet that halfway through his gab, you’ll ask yourself, ‘Why am I wasting my time here’ ?”

Mika Lesevic writes McCarthy about her Marine boyfriend who was off to yet another tour of duty in Iraq. She wrote of her awakening to “first love, first war, and first real pain of life.” When he returned home, deeply troubled, “a mere shadow of the person he used to be,” she tells McCarthy that not until he had organized a class on war veterans did she begin to understand what the war had done to her Marine. McCarthy, angry, berates our “presidents and congressional warlords [who] believe they must dispatch the young to preserve the American Empire.” He goes on describe another Iraq/Afghan War veteran-student who told him never to ask what he did there. And then, words of advice for Mika: “With your boyfriend—‘my Marine’—take whatever time you need to make a decision.”

In another class he introduced Vicki Schieber who spoke against the death penalty, hardly a unique topic, until he told them that her daughter, Shannon, a former McCarthy student, was raped and killed in her Philadelphia apartment in 1998.

Mitchell Caspell became a vegetarian and turned against the death penalty. He says McCarthy gave him a “foundation and many ideas to refer to in the future,” adding, “And I will never accept an explanation without questioning it…without questioning and thinking for myself.” To which McCarthy pens a lengthy response best summed up this way: “It’s true. If you want to make a difference start to be different.”

Bill Britton teaches in a Massachusetts prep school and was asked to set up a peace center. McCarthy says he’s never heard of a school system, public or private, hiring a full-time peace studies teacher. As a result, “schools produce docile and obedient people readied not to question the country’s economic and military policies—as they likely would if they took three or four years of peace studies.” And then his I-can’t- not-say-this” moment telling Britton that he was working with Washington’s Woodrow Wilson students to change its school name because Wilson was “racist, militaristic, sexist.” He suggested a new name, Pete Seeger High School.

Laurie Chin writes that he has “inspired me in so many ways. My degree from Colgate in Peace and Conflict Studies is really because of you.” She encloses an invitation to her graduation ceremony.

A letter from Yurina 0sumi arrives. Her mother was born in Hiroshima and she expresses her horror of war, nuclear or otherwise. “It’s springtime in Washington,” McCarthy responds, “which means that the city is awash in the beauty of the hundreds and hundreds of Japanese cherry blossom trees—gifts from your country to ours long before we were enemies. During World War II, talk was heard that the trees should be chopped down. Calmer minds prevailed, for once.” He then sends his greetings to one of her teachers. “I’m sure you are teaching him a lot, as you have me.”

Perhaps McCarthy’s book might have been strengthened had he shown himself wrestling with a few doubts –if he has any—or the frustration of being a passionate peacemaker in a nation historically addicted to war and violence. Even so, I remember a sign held by an intrepid woman at Bush and Kerry presidential rallies in the same Manhattan neighborhood in 2004. It read, “Justice Takes Time.” After reading “Teaching Peace” I wouldn’t be surprised if she had been one of Colman McCarthy’s students.