Review of Rick Perlstein's "The Invisible Bridge: The Fall of Nixon and the Rise of Reagan" 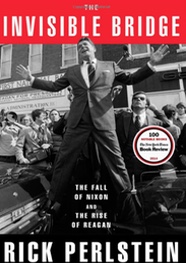 The Invisible Bridge is the latest volume in journalist and historian Rick Perlstein’s trilogy on the rise of the modern conservative movement. After volumes focusing upon Barry Goldwater and Richard Nixon, Perlstein’s The Invisible Bridge presents a less than flattering portrait of conservative icon Ronald Reagan; provoking outrage among Reagan supporters and accusations of plagiarism against Perlstein—charges which most professional historians have dismissed, although some scholars have conceded that Perlstein’s documentation and footnotes, placed in an accessible website rather than the book itself, are a bit on the sloppy side. The Invisible Bridge concentrates upon America from 1973 to 1976—a period during which the triumphant reelection of Nixon was undermined by the Watergate scandal. Although Gerald Ford attempted to restore confidence in the nation and its institutions, rising inflation and unemployment, along with increasing oil prices and crime rates, led to a national crisis of confidence. Reagan, however, refused to harbor any doubts; expressing a sense of optimism in American exceptionalism that simply would not recognize any evidence of decline. Reagan refused to criticize Nixon during the Watergate crisis; insisting that the media was responsible for exacerbating the situation by exaggerating the abuse of Presidential authority which was also common under Democratic Presidents John Kennedy and Lyndon Johnson. Reagan’s faith in the nation and belief that President Ford was compromising American values and security by negotiating with the Soviets convinced the former California governor to challenge Ford for the 1976 Republican Presidential nomination. While Reagan’s insurgency fell just short in 1976, four years later he would gain the White House and, in his eyes, restore America to the Puritan vision of the City upon a Hill; a shining beacon for liberty and prosperity to the world’s downtrodden and oppressed.

It is the gap between the reality of the 1970s and the mythology of Reagan’s rhetoric and nostalgia which drives Perlstein’s narrative. Borrowing somewhat from the approach of controversial Reagan biographer Edmund Morris’s Dutch (1999), Perlstein depicts Reagan as the product of a rather unhappy childhood with an alcoholic father and domineering mother. Seeking to gain control over his environment, Reagan trained himself to please those around him, telling them what they wanted to hear. Relying upon his teen experience as a lifeguard, Reagan fashioned a rescue narrative in which he would bring redemption to those suffering from fear and doubt. This unparalleled self-confidence served Reagan well as a young man and in his careers as a radio announcer, actor, union leader, and eventually politician. Perlstein writes, “Blithe optimism in the face of what others called chaos had always marked his uniqueness—at least since, around the time of his tenth birthday, he began mastering the art of turning the chaotic and confusing doubts of his childhood into a simple and stout hearted certainty. It marked, too, what made others feel so good in his presence—and what draws still others, those suspicious circles for whom doubt was the soul of civic wisdom to annoyed bafflement at his success” (749). In The Invisible Bridge, Perlstein attempts to explain the baffling nature of Reagan’s appeal. While Reagan perceived his Presidency as helping to fulfill the promise of America as God’s chosen nation and people, the Reagan Presidency left the United States with an increased budget deficit and growing economic inequality; and on the world stage, Reagan’s policies contributed to several hundred thousand murdered in Central America, further instability in the Middle East, and expansion of the American military empire. He did preside over the end of the Cold War, but his expansion of nuclear weapons equally had the potential of leading to world destruction. Yet, evidence and arguments to the contrary, the image of the Reagan Presidency bringing peace and prosperity to America and the world persists.

Perlstein, seeking to make some sense of the Reagan phenomenon, offers somewhat of a new take on the culture wars of America during the 1970s. He divides the nation into skeptics or doubters, willing to interrogate national policies and institutions, and true believers who unquestionably embrace American exceptionalism. According to Perlstein, a clever manipulation of national symbols was initiated by the Nixon administration with the release of prisoners of war (POW) from the Vietnam War. Perlstein documents how Nixon attempted to spin the POW issue into a positive narrative of the conflict in Southeast Asia. Rather than Vietnam being a defeat for the United States, the POW became a symbol of America’s determination and eventual triumph over its enemies. They would be welcomed home and embraced as heroes by the Nixon administration; yet, as Perlstein chronicles, the facts of the POW issue presented a more complex reality. There was a division within the POW ranks over the war and cooperation with their North Vietnamese captors. And many families were unable to resume intimate relationships after long periods of separation. Nevertheless, the POW myth continues to resonate with many Americans and has been incorporated into the contemporary assumption that any patriotic citizen must support the troops least we end up with another Vietnam ripping apart the fabric of American society.

In addition to challenging the mythology of the POW issue, Perlstein devotes considerable attention to dispelling Reagan’s contention that Watergate failed to constitute a major threat to American democracy. Perlstein documents the abuse of power by the Nixon White House that contributed to an atmosphere that condoned illegal activities by government officials. Reagan, however, denounced the Senate investigation of the Central Intelligence Agency, led by Idaho Senator Frank Church, as a threat to national security. The controversy surrounding the Church Committee seems to evoke parallels with contemporary Senate inquiries into CIA employment of torture techniques in the wake of the 9/11 terrorist attacks on the United States. Despite the lurid details of torture which clash with fundamental American values and the questioning of whether torture elicits viable intelligence, public opinion polls indicate that a majority of citizens refuse to denounce such harsh tactics—American exceptionalism trumps all doubts.

In addition to Vietnam and evidence of government corruption/excess, the 1970s witnessed the end of the post-World War II prosperity which propelled many American workers into the middle class. Automation, decline of the union movement, relocation of manufacturing jobs abroad, inflation, rising oil prices, and wage stagnation contributed to the decline of the white working class, although these economic problems were often blamed on liberal elites and government policies favoring minority groups. Thus, Perlstein concentrates upon the fear and insecurity that characterized the nation during the decade. New York City was on the verge of bankruptcy, with many Americans blaming its financial problems on the city’s failure to embrace traditional values. The faithful who believed in Reagan’s nostalgic America traced the nation’s demise to feminism, abortion, affirmative action, pornography, welfare, crime, and liberalism which undermined such American values as marriage, hard work, patriotism, Christianity, and respect for authority. Relying upon a detailed reading of American newspapers from the era, Perlstein relates how violence flared in Boston over school bussing and in West Virginia over literary choices in school textbooks.

The nation seemed prepared to unravel as the 1976 Bicentennial approached—there appeared little to celebrate for an America that had apparently lost its way. Yet, Perlstein argues that in the midst of commemorating their 200th birthday, many Americans discovered that they were believers rather than doubters. It proved an appropriate time for Reagan to challenge Ford with his feminist wife, Betty, and a Secretary of State, Henry Kissinger, who advocated détente with the communists. As it turned out, in 1976 it was Jimmy Carter rather than Reagan who ousted Ford. But in the final analysis, Reagan’s optimism carried the day as Perlstein concludes, “People want to believe—Ronald Reagan was able to make people believe” (804). Perlstein, representing the skeptical crowd, laments that Reagan’s reliance on anecdotal evidence and optimism in the face of contrary evidence established a dangerous precedent for America. While facing the crisis of global warming and with social mobility at its lowest point in generations, there is a tendency for politicians on the right who embrace the Reagan legacy to ignore these issues. Perlstein asserts, “But at the same time, somehow, something almost like a cult of official optimism—the greatest nation in the history of the earth—saturates the land” (xx). Thus, while the debate between the faithful and skeptics continues, the champions of American exceptionalism appear to have the upper hand in the country’s culture wars. The top ten best-selling history books in 2014 include titles by conservative pundits Bill O’Reilly and Glenn Beck, but Rick Perlstein’s impressive The Invisible Bridge is missing from the list. Perlstein’s book could probably use a little editing of the long newspaper quotes as the book weighs in at just over 800 pages—probably a little long for Ronald Reagan’s Readers’ Digest attention span.