Review of Stanley Aronowitz's “The Death and Life of American Labor: Toward a New Workers’ Movement”

Robert Parmet, Professor of History at York College of the City University of New York, is the author of “The Master of Seventh Avenue: David Dubinsky and the American Labor Movement." 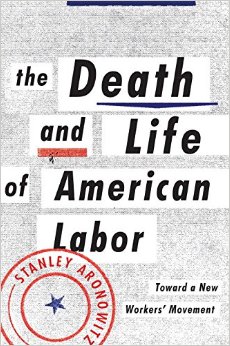 Stanley Aronowitz is again challenging American workers to rethink their place in the economy. Beginning with “False Promises” (1973), and as an activist and historian, he has been critical of the labor movement and is trying to reform it. With the percent of union membership now approaching ten percent, he has abandoned hope that the movement can be saved in its present form. In “ The Death and Life of American Labor”he argues that “the era of labor-management cooperation that was initiated by the New Deal and supported by succeeding legislation has come to an end.”

The National Labor Relations Act (1935) sanctioned collective bargaining and compelled negotiations when unions won representation elections, but also had a downside for organized labor. Aronowitz observes that the law “led to cooperative relationships between union leaderships and the companies with which they deal.” He regards such collaboration between companies and unions as symptomatic “of nearly all unions’ loss of class perspective,” resulting in class warfare vengefully pursued by management, but renounced by labor. Also contributing to a weakening of unions, he contends, is the collective bargaining contract. Legally bound to enforce contracts, for example, by renouncing strikes or job actions, unions act “as management’s police force.” “Today, well over 90 percent of union contracts have a no-strike clause.” Accordingly, “the union tends to become conservative and can even become an agent of shop floor worker subordination.”

It is the “mass psychology of liberalism,” Aronowitz argues, that “has conditioned labor leaders, workers, and the working poor and unemployed to a passive cynicism and totally compromised relations with capital.” Continuing, he writes, “Modern liberalism, or progressivism,” as opposed to free market liberalism, generated the social reform of the twentieth century to the 1970s, but then “ground to a halt.” What followed was a weakened American left, “purely tactical” major party divisions, and the death of liberal reform as “capital . . . waged a successful war on labor and the state’s social-wage programs.” The Occupy Wall Street movement of September 2011, which is reminiscent of the protest against the concentration of wealth by the New Left of the 1960s, arose in response to this situation. Aronowitz’s remedy for the conditions cited by the Occupiers: “new forms of organization.”

Though rank-and-file unionism, that is, opposition by left-wing union members to the leadership of more conservative officers, is not new, the author finds it appealing. Accordingly, he recalls the General Motors strike of 1936-37 in Flint, Michigan, noting that it “set the stage for GM’s swift recognition of the UAW [United Auto Workers].” Owing to rank-and-file insurgency, unions representing several groups, including teamsters, steelworkers, and New York City transport workers and public school and college teachers, later experienced both change and turmoil. In 1976, reformer Ron Carey of the Teamsters for a Democratic Union (TD) won the presidency of the Teamsters union only to later have to resign following charges, subsequently unsubstantiated, of his own corruption. For twenty-five years, beginning in 1952, rank-and-filers fought unsuccessfully to win control of the United Steelworkers of America (USW). In New York City Albert Shanker presided over a “highly centralized” American Federation of Teachers (AFT) to the dismay of fellow unionists who complained of “Shankerism.” Through the New Caucus, an insurgency to which he belongs, Aronowitz has promoted rank-and-file-unionism within the Professional Staff Congress (PSC) at the City University of New York. In 2000, the New Caucus won a five-year fight to lead the PSC.

Therefore, it is against a backdrop of activism that includes low-wage restaurant and department store workers, as well as the Occupiers, that Aronowitz proposes a “ten theses, or ten-point manifesto, for a new labor movement.” He argues that bargaining need not always culminate in a contract. “If the workers’ collective power is sufficient to avoid a formal agreement, they are better off without one. If they must sign one, it should not include a no-strike provision.” Second, there should be “a strong push for legislation that mandates a reduced workday and workweek.” Third, “there must be a national campaign to enact a guaranteed income equal to the minimum wage and/or employment compensation.” Fourth, there should be “single-payer health care.” Fifth, “producer and consumer co-ops” should be organized to improve food quality and provide “good jobs.” Sixth, rank-and-filers “should demand the right to create minority unions.” Seventh, end “racial, gender, and ethnic discrimination in hiring, especially in the skilled trades.” Eighth, all unions “should demand and provoke organization of the vast and growing population of precarious workers.” Ninth, continue the “long-standing struggle for union democracy.” Tenth, create “a truly global labor movement.”

Aronowitz’s points warrant serious consideration, and the very fact that he, a union member, has issued them, is evidence that the American labor movement is not quite dead. To what extent they will be put into practice is not yet known. What is evident today is that low-wage workers, such as those employed by Walmart and Burger King, are engaging in the kind of direct action that he advocates.

On the other hand, in view of the current political and economic climate, it is unlikely that there will be significant progress toward realizing the author’s goals. Aronowitz reports in his endnotes that there are some cooperative groceries, and that the Electrical Workers, Steelworkers, and Communications Workers have attempted to help overseas workers. Otherwise the prospects are mixed. Congress is refusing to raise the minimum wage to $10.10 per hour; the Affordable Care Act is under ongoing attack, with a single-payer national health insurance system nowhere in sight; racial, gender, and ethnic discrimination is entrenched among skilled workers, and union contracts are still the primary negotiating aim, though “movements without contracts,” as Aronowitz calls them, exist among taxi, domestic, restaurant, and, as previously noted, even Walmart workers. As for union leadership, it usually remains unchanged.