Review of Mark M. Smith's "The Smell of Battle, The Taste of Siege: A Sensory History of the Civil War”

Murray Polner, a regular HNN book reviewer, wrote “No Victory Parades: The Return of the Vietnam Veteran” and with Jim O’Grady “Disarmed and Dangerous: The Lives & Times of Daniel & Philip Berrigan.” 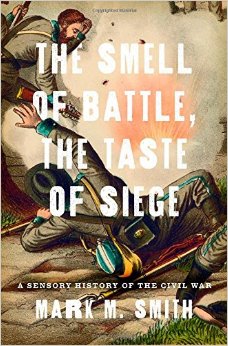 “How Did People Experience the American Civil War?”

So begins Mark Smith’s original if shocking history of the Civil War’s smells, tastes, sounds. So many books have been written about the war from almost every angle but virtually none from Smith’s approach save the eloquent histories by Bruce Catton and Shelby Foote, for example. Yes, every year, thousands try to re-enact the famous battles but it is impossible to recreate what happened in the war. Whatever re-enactors playing soldier say or think, Mark Smith, Carolina Distinguished Professor of History at the University of South Carolina, says “cannot be understood with the same or even similar meaning today…What sounded loud or smelled rancid or tasted foul is different or even irretrievable.” Or, put it this way: If a contemporary writer mentioned that the battlefield at Gettysburg smelled of death, what could that have actually meant to both the warriors and civilians in 1863?

Smith opens with the Holy City—Charleston, South Carolina,--so-called because of its many churches. A quiet and prosperous southern city, obsessed with keeping order and preserving the rights and privileges of a parasitic slave owning upper white class who were always fixated on fears that their slaves might rise up and destroy everything they held dear. The eerie silence of nighttime was especially worrisome. Nat Turner, Denmark Vesey and many lesser known rebels did not go unnoticed and it is hardly surprising that many secessionist firebrands came from Charleston. Charleston was then a city of 70,000, with 2,800 owning 37,000 slaves plus about 3,000 free blacks. Its slave trade was the largest in the country. “Slavery built this city,” Smith writes, “ and the culture that built slavery defined how people behaved”…It all came down to one word: order.” (In Tsarist Russia the rural nobility lived among the peasantry, the cherni cheloveki or black peasants, as some called them, and they too dreaded a peasant uprising, certainly one reason why serfdom was abolished in 1861),

Lincoln’s election, badly shook the city’s elite. Pro-slavery secessionists “Ran through the street shouting ‘Hurrah for Lincoln,” considering anti-slavery. Politicians and newspaper editorials issued furious demands to quit the Union,, their loud and passionate voices shattering the city’s artificial sense of public calm. “Measured by orations, voices, chatter, and shouts, it was the most sound-filled day in the city’s history,” Smith comments. Whites rushed to enlist in military militias. And soon the city’s leaders turned to Fort Sumter in Charleston Bay. When Major Robert Anderson surrendered the fort the city broke out in “deafening shouts,” the thunder of southern cannon fire celebrated as the start of what the leaders were convinced would be a glorious and triumphant future.

Turning to the war, Smith wonders, “But what was it like to experience Gettysburg?” The town was a mere eight miles from a booming slave trade beyond the Mason-Dixon Line. Residents were aware that the 70,000 Confederate Army of Northern Virginia was coming, to be met by 97,000 Union soldiers of the Army of he Potomac. Charlotte McKay, a Union nurse, wrote that she saw Southern cavalry coming closer, “whose sabers always announce their approach before you hear the tramp of their horses.” When the great battle ensued, the “sight of southern “bayonets glistening in the sun” and the “deafening roar of musketry” shocked civilians. They saw mutilation they had never before seen: “amputated arms and legs dead and horses, wounded and screaming with pain. “Young women of fifteen, whose lives had been shielded from such things, saw men with eyes blows from their sockets, soldiers limping, sometimes crawling from the field of battle. When possible, the dead were buried quickly in shallow graves or left to decay in the intense heat of the July sun, while the wounded were sent into the town where besieged and worn out doctors and nurses, their clothing filthy with the blood and intestines of dead and near-death soldiers of both armies.

And then there was the demonic smell of chaos as well. Smith continues, from the gunpowder and saltpeter and rotting bodies . Inside the field hospitals men were groaning and moaning, the countryside littered with dead and dying and with dead horses “swollen to their natural size.” In the Battle over Cemetery Ridge, approximately 10,000 Americans died in one hour. “Laid end to end,” explains Smith, the dead “would have stretched three miles." So vast was the violence that, Smith writes, the odor could be was evident everywhere., none of which can be recreated by re-enactors. The slaughter was so enormous and so unprecedented in the first of our total wars, that the medical men and women who tried to help were themselves often victimized by disease and perhaps a feeling that civilization had at last come to its well-deserved end, In PBS’s innovative TV program, “Finding Your Roots,” Henry Lewis Gates informed the actress-impersonator Anna Devere Smith that her great-great grandfather, Basil Bigg, a free black whose Gettysburg farm became a Confederate field hospital, was hired after the battle to remove the dead and place them in permanent graves.

Cornelia Hancock, an intrepid young New Jersey woman who also came to help, wrote in a way that no latter-day reenactor could “capture.”Listen to the carefully chosen words of this remarkable woman:

“Not the presence of the dead bodies themselves, swollen and disfigured as they were and lying in heaps on every side was as awful to the spectator as that deadly, nauseating atmosphere which robbed the battlefield of its glory, the survivors of their victory and the wounded of what little chance of life was left to them”

“Gettysburg,” comments Smith, “was the stench of war certainly, But it was also the living stench of the Union literally coming apart. This was a degenerative moment, one that had to be rescued later by powerful speeches, endless visits, and solemn, postwar reconciliatory commemorations.”

And there was still the siege of Vicksburg,

Vicksburg, Mississippi, became the bulwark of the western Confederacy in the spring of 1962, following Confederate defeats at Forts Henry and Donalson, upriver in Tennessee and at New Orleans, down river. Confederate defenses were constructed largely built by slaves commandeered from nearby plantations. “Vicksburg is the key,” said President Lincoln. “The war can never be brought to a close until that key is in our pocket.”

General Ulysses Grant complied and his forces isolated the defenders and began a devastating siege, “a slow process of strangulation,” which lasted 47 days and caused the town, which in antebellum years had flourished because of the Mississippi River and as a railroad hub, to fall into a devastating and demoralizing plague of hunger and starvation, unmatched anywhere in the South. Grant, says Smith, was “a merchant of war” who created an artificial famine, to wear down resistance. “The sounds of the siege were, like Grant, relentless.. Clothing became scarce. Dust from the engines of war in the heat had created filth everywhere, clouding the air. Before the war the social hierarchy seemed permanant: wealthy whites, poor whites, black slaves. As the siege progressed , everyone suffered and as a New York Herald reporter commented, “the reduction in diet was closely related to the humiliation of a social class.”

To Grant and Lincoln the sacrifice and so many were justified. With the victory, 1,000 miles of the Mississippi now lay open to Union forces. The South needed a scapegoat and Confederate General John Pemberton was blamed by many southerners for the defeat, perhaps because he surrendered his army of 31,600, all of whom Grant soon set free. 10,000 Union and 9,091 Confederate soldiers, their average age 20, were wounded or killed Today, the reverential, haunted and hushed Vicksburg National Military Park covers 1,300 acres of the actual battlefield,

Their average age was 20. But with the victory, 1000 miles of the river lay open to the Union. Today. Vicksburg National Military Park covers 1,300 acres of the actual battlefield, where once there was a several-hours truce to allow the removal of the dead and wounded and when the young soldiers poured out of their trenches and caves to fraternize with their “enemies.”

“The Smell of Battle, the Taste of Siege” is an enthralling and imaginative presentation. Smith relates a poignant tale of some Union troops in Sherman’s army so emotionally touched by a slave mother being reunited with her daughter—who had been sold years before—and “wept openly” at the sight. When slaves heard, saw and smelled Sherman’s troops approaching they “fled to his lines, happy to trade slavery for the taste oif Union rations.” But they also craved more than food, and all along his route they exuberantly welcomed the northerners and the collapse of the racist order. “Despite the noble cause they championed,” Sherman’s famous, if gory and brutal “march to the sea, which Smith rightly condemns, was “necessary, for from the degradation came national identity--the new birth of freedom,”

The primary virtue of this book is what the war did to its participants and victims. “weapons used against soldiers, lacerated, shot, punctured, bayoneted pulverized, extracted, amputated and burned. Flesh was torn asunder; the sight of brains and bone became commonplace…High society was forced to crunch like animals in caves, rustle around dirt, scraping against tree roots,” engaging all their senses.

Regrettably, a year or two after Appomattox, embittered white southern racists re-emerged, In his new and compelling book, "After Lincoln, How The North Won the Civil War and Lost the Peace” the late A.J. Langguth describes how and why, with the collapse of Reconstruction, the KKK and other night riders flourished and carried out crimes against blacks that abolitionists and others had hoped would disappear. The sounds of war were still but for the next century it was fair to wonder who really won the war and whether it worth all the misery and deaths?