Review of Edmund Fawcett’s “Liberalism: The Life of an Idea” 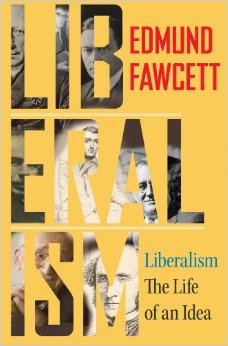 What do we mean when we call ourselves or someone else a “liberal”? In his Political Dictionary (1978 ed.) columnist and former Nixon speechwriter William Safire wrote, “Currently one who believes in more government action to meet individual needs; originally one who resisted government encroachment on individual liberties.” A typical modern-day U. S. liberal would embrace both goals, especially government help for those most in need and, a la the American Civil Liberties Union (ACLU), defending civil liberties against various intrusions including government spy agencies like the National Security Council.

But Safire is correct in indicating that the meanings of liberal and liberalism have changed over the past few centuries. The great value of Edmund Fawcett’s Liberalism: The Life of an Idea is that it enables us to understand the meaning of liberalism in its historical context, both in the Europe and the United States.

A key question, however, is whether today, we wish to use the narrower evolved definition that Safire suggests or the broader, more inclusive one Fawcett maintains. Although this reviewer prefers the former—referring to Margaret Thatcher and Ronald Reagan as liberals, as Fawcett does, just seems wrong—I’ll grant the logical consistency of his treatment.

His inclusive view emphasizes four ideas that have characterized liberalism: “acknowledgment of inescapable ethical and material conflict within society, distrust of power, faith in human progress, and respect for people whatever they think and whoever they are.” These four ideas “distinguish the liberal outlook from those of its nineteenth-century rivals, conservatism and socialism, as well as from its twentieth-century competitors, fascism and communism, and from present-day contenders, notably competitive authoritarianism, national populism, and Islamic theocracy.”

Fawcett recognizes that not all liberals share an equal enthusiasm for all four ideas and that some liberals are more liberal than others. He also does not place much credence in what parties (or sometimes even individuals) call themselves. He mentions, for example, that in 1985, the French Socialist Party “dropped the last remnants of socialism.”

By his criteria then, as he succinctly states in a 2014 essay, “Viewed historically, liberalism was always a big tent. It made room for right and left, radicals and traditionalists, free-marketeers and social democrats: for Hayek and Keynes, Hoover and Roosevelt, Reagan and Kohl, but also for Johnson and Brandt. It is not uniquely American or peculiarly European. No anglophone monopoly, it had shining traditions in France, Germany and continental Europe.”

Most of the individuals Fawcett includes as liberals (more than fifty are mentioned in the Table of Contents) would please most U. S. liberals. They include: John Stuart Mill, Abraham Lincoln, John Maynard Keynes, ACLU founder Roger Baldwin, Supreme Court Justice Louis Brandeis, Franklin Roosevelt, George Orwell, Albert Camus, Walter Lippmann, John Rawls, Lyndon Johnson, and Willy Brandt—note that they are taken from the four countries that Fawcett sure-handedly limits his study to: France, Britain, Germany, and the United States.

But most modern-day U. S. liberals would not agree with his inclusion of not only Thatcher and Reagan, but also of others such as Friedrich Hayek, Herbert Hoover, and the New York neoconservatives Fawcett mentions. Still others, like Britain’s Joseph Chamberlin and other “liberal imperialists,” today’s liberals may wish to disown as they might a reprobate grandfather, but by the author’s benchmarks they are part of the diverse liberal family.

Knowing that the Englishman Fawcett was for decades a journalist for The Economist, including being its chief correspondent in Paris, Berlin, and Washington also helps explain his approach and expertise. In a 2013 blog essay, the British publication founded in 1843, claims that its “liberalism . . .reconciles the left’s impatience at an unsatisfactory status quo with the right’s scepticism about grandiose redistributive schemes,” that it “opposes all undue curtailment of an individual’s economic or personal freedom,” that it has endorsed “the candidate or party most likely to pursue classically liberal policies,” and these have included some “on the right, like Margaret Thatcher, and on the left, like Barack Obama.” Obviously the liberalism of The Economist and of Fawcett is more complex than proponents and critics of U. S. liberalism are likely to acknowledge.

He declares that “liberalism has a history, practitioners, and an outlook to guide them,” and his book is an attempt to tell the “story of all three.” In his Preface and Introduction, he introduces us to the outlook and sets out his time frame. The remaining chapters tell the history, mixing appropriately thinkers and politicians.

He sees liberalism as emerging after the first Industrial Revolution had begun in Great Britain and been followed by the American and French Revolutions and Napoleon. “It arose as a practice of politics in the years after 1815 across the Euro-Atlantic world, but nowhere significantly before. Liberalism responded to a novel condition of society energized by capitalism and shaken by revolution in which for better or worse material and ethical change now appeared ceaseless. In that unfamiliar setting the first liberals sought fresh terms for the conduct of political life that would serve their aims and honor their ideals.”

He divides the history of liberalism into four periods: 1) 1830 to 1880, “a time of youthful self-definition . . . and large successes”; 2) 1880 to 1945, which witnessed liberalism’s compromise with democracy and the emergence of liberal democracy; 3) 1945 to 1989, which began with the collapse of liberalism’s enemy to the right, fascism, and ended with “the final surrender of liberal democracy’s twentieth-century rival to the left, Soviet Communism” (the process was actually not completed until late 1991 with the disintegration of the USSR); and 4) a post-1989 period, which “notes a return of self-doubt as to what liberalism is and how long it may last.”

Although the history of ideas or intellectual history sometimes appeals only to a small reading audience, Fawcett’s book should have a broader readership because he mixes well the biographical with the theoretical, and politicians with less down-to-earth thinkers. We learn all sorts of fascinating details about individuals like the British Prime Minister William Gladstone and the French Prime Minister Georges Clemenceau. The former reputedly read some twenty-one thousand books, including the Iliad in Greek three dozen times. The latter, who many think of as only an old man who frustrated Woodrow Wilson at the Paris Peace Conference of 1919, had earlier spent three years in America, had an American wife, fought several duels, and was “habitually unfaithful.”

Fawcett’s biographical details not only enliven his book, but help us understand better the popularity of some of Fawcett’s “liberals.” We learn, for example, that economist Milton Friedman had a TV show on public television (actually a 10-part 1980 series) and, for 18 years, a Newsweek column. Biographical information also helps flesh out a thinker’s abstract ideas, grounding them in concrete reality. It is certainly relevant, for example, to know whether or not a person’s professed liberalism was adhered to or violated in his or her personal life.

After Fawcett informs us that the influential John Rawls—16 pages are devoted to him and his critics—was “universally admired, even loved,” that “colleagues remember his kindness and wry humor,” and that he thought the atomic bombing of Japan was immoral, we have a more rounded picture of the man whose A Theory of Justice (1971) influenced so many liberals, including a young Barack Obama.

Fawcett also provides numerous colorful details and quotes. On Rawls’ honeymoon, he and wife “found time to index a commentary on Nietzsche.” After describing President Lyndon Johnson’s many liberal accomplishments and his personality—“he had to be the center of attention and dominate every encounter, whether that took charm, bullying, profanity, crudity, cornering, lapel grabbing, elbow pawing, or shin kicking” —Fawcett quotes him on former Democratic presidential contender Adlai Stephenson: “a nice man with too much lace on his drawers.”

Reviewers often criticize, fairly and unfairly, books for what they do not include. So here is my brief list of some items I would have liked to have seen given more space.

●  In treating the important thinker Isaiah Berlin, mention that he greatly admired Franklin Roosevelt and, according to a friend, was passionately against Thatcherism.

● How liberals address environmental concerns. This is certainly one of today’s greatest problems, but there is almost no mention of it except occasional references such as “a counterliberal left lived on [in France] in . . . radical Greens.”

● Some consideration of how non-Western thinkers and politicians regard liberalism.

Despite this criticism, however, Liberalism is an important and worthwhile book. The writer Wendell Berry once wrote about fellow writer Edward Abbey: “For me, part of the experience of reading him has always been, at certain points, that of arguing with him.” One does not have to agree with all the points of an author to benefit from his/her book. Although I may not include Reagan and Thatcher in my list of liberals, Fawcett is right to insist that liberalism remains important even if we limit it to recognizing perennial conflict within society, distrust of power, faith in human progress, and respect for people. He realizes that the conflict of ideas and interests, as well as respect for others, necessitates tolerance and compromise. For some liberals, as he acknowledges, this may not be enough. We know, for example, that they may (or may not) also burn with a passion for justice, helping the poor, or a hatred of war. But such virtues as tolerance remain vitally important. Horrors like the Holocaust and more recent reminders like the HBO documentary Hunted: The War Against Gays in Russia should never let us forget this.

In his final paragraph Fawcett refers to Chekhov, which reminds one of how he disliked being labeled, as he said, by those “determined to regard me either as a liberal or as a conservative.” In the end, it remains less important how we label ourselves than how humanely we behave toward others, individually and collectively. This was true in the era of the great Russian writer and humanist, and it remains so today.