In Honor of Bernard A. Weisberger: “To Sir With Love…”

Joan Jacobs Brumberg is Stephen H. Weiss Presidential Fellow and Professor Emerita at Cornell. She is the author of Fasting Girls: The Emergence of Anorexia Nervosa as a Modern Disease, which won the John Hope Franklin Prize, the Berkshire Book Prize, the Watson Davis Prize (History of Science) and the Eileen Basker Prize (Medical Anthropology). Her other books are Mission for Life, The Body Project, and Kansas Charley. She has received awards from the National Endowment for the Humanities and the Rockefeller and Guggenheim Foundations. She is a fellow of the Society of American Historians. 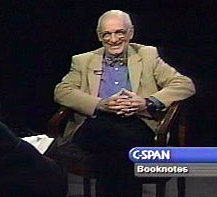 I have known Bernie Weisberger for fifty years. Throughout that time, he has been an intellectual mentor, an avuncular adviser, a splendid correspondent, and a dear and honest friend. He was the only historian I ever had as a teacher who really valued the idea that history could and should be written outside the academy, and that telling a good story in a book mattered as much as historiographical foreplay.

I remember the way Bernie sometimes role-played a historical figure (like John C. Calhoun) or read dramatically from revealing primary sources in a large class on Civil War and Reconstruction.

(This was surely an expression of his thespian tendency demonstrated on a number of occasions in University of Rochester productions.) I really did not know then about Bernie’s professional reputation, or his earlier books, Reporters for the Union (1953) or They Gathered At the River (1959). However, I do remember wondering why a professor whose name appeared to be Jewish was so interested in evangelical Protestants. When I returned to graduate school to earn a Ph.D. at the University of Virginia, Bernie’s 1959 book presaged my own dissertation and first book, Mission For Life: The Judson Family and American Evangelical Culture, which was published exactly twenty years after his. And, predictably, I was repeatedly asked: “ How does a nice Jewish girl get interested in a subject like this?” I know now that Bernie provided me with a broad and sensitive introduction to American social and cultural life which was a building block for my thirty year career at Cornell.

Bernie also encouraged and stimulated my love of primary sources. As a high school student in an Advanced Placement American History in Mount Vernon, New York, I was fortunate to have Alden T. Vaughn, then a Columbia University Ph.D. student, as my teacher and he assigned Commager’s Documents, the huge collection that no one could carry easily around in the halls. I found those documents “interesting” and I understood their importance for what historians did, but I had no sense of the magic of finding your own sources, or of the splendid isolation and pleasure that could come from sticking my head in a microfilm reader, turning the handle, and tuning out everything else on campus.

After Bernie became my adviser, I was fortunate to interact with him only in small groups or independent study classes, usually in his office in Rush Rhees Library. By this time, he was a department chair, and interaction with students had become a pleasant diversion from a group of cantankerous historians dealing with all the things that energized the profession in the mid 1960s. I admired Bernie for his politics as well as his intellect: he went to Selma in 1964 with another of my history professors, Christopher Lindley, and when they came back I was energized by the powerful story they told one afternoon in a hushed, dark Rush Rhees reading room. Because I wanted my own civil rights adventure, I began to work for Chris Lindley’s efforts to dismantle racial discrimination in the city’s apartment rentals. I had a phony diamond engagement ring and I was able to secure rental agreements only hours after African graduate students were told there was no vacancy. Together, Bernie and Chris were a powerful pair of teachers, both role models, willing to take history outside the classroom. Studying muckraking literature with Bernie was an absolute high point because of his ebullient interpretation of the books the Muckrackers created and the journalism that they practiced.

But there were two memorable undergraduate projects that I did under Bernie’s direction that really stoked my desire to be a professional historian even though that education was detoured for a number of years by a short-lived “practice marriage.” Both of these papers – one on Masonic newspapers in upstate New York in the antebellum period, and the other on the development of the social and artistic image of Abe Lincoln in the Depression Era – still ignite the circuitry in my brain but not because they added that much to my knowledge base. Rather, each one gave me extraordinary pleasure: the thrill of historical detective work and the reward of finding a pattern or disjuncture in words from the past both printed and handwritten. I still have copies of the papers I produced on my portable Smith Corona. One has a constant typo throughout—“Linclon” as opposed to Lincoln, over 25 times. These days, a spell check would have prevented my shame which Dr. Weisberger appropriately called me on. I still do not type Lincoln’s name with ease.

Over the years, with new books and my immersion in women’s history and the social history of medicine, I still saw Bernie in New York City, in Chicago, in Upstate New York, and at historical meetings. I recall that I once tried to “fix him up” with another historian of women, and when I married again in the early 1970s, he embraced my new husband and son with authentic affection. He has always been for me “the touchstone” for what it means to be a powerful teacher and an engaged historian. At 92, he has published a startling number of meaningful books (Is it really 25?) and while none was a best seller, all combine his penchant for in-depth research with a confident control of the narrative. I was honored to be named, as Bernie is, a fellow of the Society for American Historians, an honorary based on quality of writing.

Bernie Weisberger has mastered electronic technology better than any nonagerian I know and his e-mails remain well written, warm, pithy, and persistently skeptical about American and world politics. By his own admission, he remains today a “pissed off Progressive.” I hope that this “electronic festschrift” will provide him with evidence that he was a very special teacher and mentor who shaped my approach to history and my way of telling it.