In Honor of Bernard A. Weisberger: Bernie and Me

Historian Walter Nugent is the author of many books including, "Habits of Empire: A History of American Expansion" (Knopf, 2008). He is a member of HNN's advisory board. 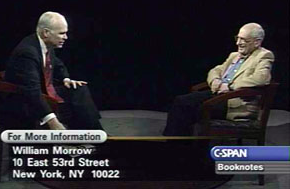 On a sunny day in August, 1959, I presented myself for my doctoral orals in the Social Science Research Building of the University of Chicago on East 59th Street. My examiners were historians I had worked with for the past five years – with one exception. I had heard a rumor that a Bernard Weisberger, himself a Chicago PhD of not many years before, was joining the faculty. And lo, “Mr. Weisberger” showed up for my exam, and a good thing he did. It was the first time I laid eyes on Bernie. Although I had great respect for my older teachers, they could be, frankly, on the stodgy side. In exchanges with them, I sometimes felt like I was running in sand. With Bernie, I flew. He was so lively and rapid-fire, a strong fresh wind. Thanks to him, the exam came alive, and I got through successfully.

We have had countless meetings in the fifty-five years since – in Manhattan, at his “country estate” near Elizaville between the Hudson and the Taconic Parkway, and for the past couple of decades, in Evanston and the North Shore. Bernie has never seen an opera he didn’t like, especially if it’s French or Italian. One of our great shared pleasures is to enjoy a Sunday matinee at the Chicago Lyric Opera, followed by a martini and a meal at a nearby bistro.

As a historian, Bernie (like me – it’s a modus operandi we share) has been a prospector rather than a miner. Both diggers seek to unearth something valuable. The miner, however, spends his or her career plumbing a vein as deeply as s/he can, working in a defined subject area, lamp on forehead (as I once wrote). The prospector, on the other hand, like the California Forty-Niners, pick and pan in hand, fences off a few square feet of turf, follows a hunch, sinks or swims, then moves on to another promising lode. Both miners and prospectors work hard and are skilled; neither is “better” than the other. They just operate differently. In the Old West, contrary to stereotypes, miners greatly outnumbered prospectors, and so it has been with historians. Prospectors are rare.

Bernie, however, is a true prospector. His dissertation on Civil War army correspondents developed into his first book, Reporters for the Union (Little Brown, 1953). Then he moved to nineteenth-century revivalism in They Gathered at the River (1958, 1979), and on to The Dream Maker: William C. Durant, Founder of General Motors (1981), one of the most searching biographies anywhere of a corporate mogul and the enterprise he created. Then came Cold War, Cold Peace: The United States and Russia since 1945 (1984) and a number of books with American Heritage and Time-Life. In 1994 he published a labor of love, his collective biography of the La Follettes of Wisconsin: Love and Politics in Progressive America, and the (in my opinion, underappreciated) America Afire: Jefferson, Adams, and the Revolutionary Election of 1800 (2000). It’s a fine history of the 1790s and the formation of the American party system. And these titles are only some of his twenty-five listed in the Library of Congress catalog.

Nor has Bernie eschewed shorter pieces. His 1959 article in the Journal of Southern History, “The Dark and Bloody Ground of Reconstruction Historiography,” was one of the first to challenge the long-prevalent, deeply racist “Dunning School” interpretation of Reconstruction and post-Civil War black history. Along with the late Kenneth Stampp’s The Peculiar Institution (1956), revisionism of that depth and thoroughness took intellectual and moral guts. Bernie also produced dozens of monthly columns for American Heritage explaining the historical roots of current events. You get the point! He has produced a truly remarkable body of historical work.

When I had the honor of dedicating my small book on Progressivism to Bernie, I called him “a true Progressive.” He is that, and he is truly a mensch. My life and my historical work (much of which he has read for me in manuscript) are much the better for having had Bernie as a friend.