The New York Fringe Festival: Reviews of "The Three Faces of Dr. Crippen" and "Hoaxocaust"

Where, Oh Where, Is Mrs. Crippen? 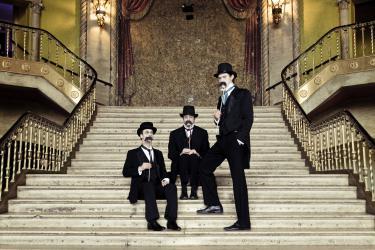 Few Americans know anything about the mysterious 1911 murder of Belle Crippen, the middle-aged wife of Hawley Crippen, an American born London pharmacist, whose skin was found curled up under a basement stone in her husband’s home. The Crippen case is one of the most famous in British history, though. Several movies have been made about it, more than a dozen books written about it and the Brits argue about it to this day, more than a hundred years later.

Belle Crippen’s husband, it seems, had been having a romantic fling with his 20ish secretary, Ethel, for several years, his animosity for his harsh, bossy wife growing as the years went by. Then, one night…

The forty some Hawley Crippen, can’t stand his wife, especially after he started his bold romance with his lovely secretary, who tells him that they would be better off if his wife “disappeared.” Divorce was so expensive, even back in 1911.

The play, that opened at the Connelly Theater last week, explores Crippen’s growing desire to kill his wife and he debates how to do it and when, supported wholeheartedly by his girlfriend. In the end, he and the girlfriend killed her. Or did they? Was that really Mrs. Crippen’s body? Did Crippen kill her?

Kate Nawrocki’s scrumptious set, one of the best in the Fringe Festival, has tables, chair, desks, typewriters, book cases, and, to top it all, a bathtub, and filled with a singing woman wearing a bright pink blindfold.

After the actual murder took place, Crippen and his lover, disguised as a young boy, fled England on a cruise ship bound for Canada and freedom. The police jumped onto a second cruise liner, a faster one, and pursued the pair while the London newspapers had a field day with the transatlantic story. Will the police catch them or won’t they? Whose ship is faster? The tension mounts…

Director Jimmy McDermott has done a sensational job of moving the play along at a lightning fast pace while at the same time painstakingly developing each character. The story, under his direction, is told by different people in different places and, step by step, character by character, the tale unfolds. He gets superb performances from Matt Holzfeind, Scott Cupper and Stuart Ritter as the three Dr. Crippens, Kate Nawrocki as his wife and Delia Baseman as the girlfriend, Ethel.

Schwartz has put three men in the play as Dr. Crippen. They each represent one of his personalities. It is a bit cumbersome and she might be better off making him one character. Her point, though, that this was a torn man, is made and made well, though.

See this play. It is a barnburner of a murder story with good incidental music, a delicious end and a nice look at England in 1911.

There WAS a Holocaust and Millions DID Die

Barry Levey is a smiling, amusing young actor who put the audience at ease with some easy banter at the start of his one man play, Hoaxocaust, on Holocaust deniers, who grow in numbers each year. He had to start that way to ease the pain of everybody for what was to come. Levey does not stage a one man play as much of an actor’s convincing argument against the Holocaust deniers. He does it by putting the argument within a fictional story of his trip to his brother’s wedding in Budapest and the deniers he meets along the way to it.

The Holocaust deniers make a strong case, from their point of view, says Levey. They argue that Jews died in labor camps, not extermination camps, that no one can prove they were gassed, that photos of gas chambers were manufactured, that the real number of Jews who died in World War II was 300,000, not six million and that no one has ever produced an order to kill Jews signed by Adolf Hitler. The Holocaust, they charge, was all made up to gain sympathy for Jews and for Israel when it began its nationhood in the late 1940s.

The success of Levey’s play against the deniers, that opened last week at Theater 64E4, is that he did not shout and scream or bellow at the deniers. He did not even demean their arguments. He simply explains that they are wrong and that people have proved they were wrong for more than fifty years, since the movement began with the 1961 German book The Forced War, by David Hoggan. Levey cites dozens of documented accounts of the extermination of the Jews from Germany, Poland, France, Czechoslovakia and other countries during the war and shocks the audience by stating that in those years more people were exterminated than in just about all world history combined in a similar period.

Was there a Holocaust? Of course there was. Millions died. Evidence runs from Eisenhower’s tour of a concentration camp at the conclusion of the war to journals and diaries not only of survivors of them, but German guards who worked there. How, then, do the deniers get any mileage out of their argument?

Who believes the deniers? Levey argues, with great, quiet force, that those who do are those who want to believe them.

Sadly, there are too many who want to believe them.

PRODUCTION; Produced by the Fringe Festival. The show is written and performed by Barry Levey and directed by Jeremy Kronenberg

The Fringe Festival continues through August 23.