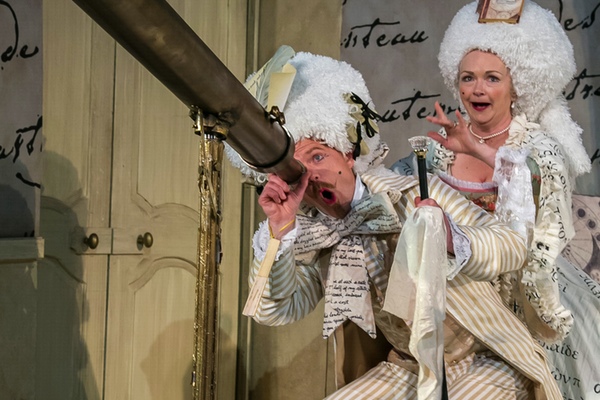 The marketing department of the Shakespeare Theater bills the actresses in Moliere’s 1672 comedy Learned Ladies as the “It Girls,” as in 1920s American movie actress Clara Bow, the fabled “it” girl of Hollywood. They are not. They are the Marx Brothers in drag.

The cast of Learned Ladies has hijacked the play, tossed it into the back of a horse drawn French carriage and roared off into the darkness with it. These women cavort about the stage like Groucho, Chico and Harpo, and a little bit of Zeppo, too, making audiences roar in appreciation. Their dazzle overcomes a tired and ordinary script.

And, too, the actresses, led by director Brian B. Crowe, have turned the slow moving drawing room comedy into a hilarious battle between a husband and wife for dominance in the household. Guess who wins?

Moliere’s story, written in 1672, wonderfully translated by Richard Wilbur, is simple. A lovely young French girl, Henriette, wants to marry the man she loves but her mother, a phony if there ever was one, wants her to marry a prancing, eye popping, swooning local intellectual poet who is the object of the affection of her and her academic lady friends, all of whom are trying to be learned intellectuals but failing badly. The other daughter doesn’t want to marry anybody because she is “married” to philosophy. A third woman wants to marry everybody but can’t find anybody to whisk her down the aisle. There are suitors here, suitors there and suitors everywhere for Henriette. In the end, it is true love vs. the arranged marriage of the eighteenth century in the heated battle of wits – lots of wits – and between mom and dad for power in the living room.

The plot is not complicated, but the performances (on the outdoor stage) are very complicated. The women laugh and cry, pout and shout, tumble and rumble. The women yearn for knowledge at the same time they yearn for men. Do you remember that line from J.D. Salinger’s in the Catcher in the Rye, that the phonies were coming through the windows? Salinger must have seen this play. Director Crowe has done a superb job with the entire cast, down to making everybody leap a foot in the air when someone stomps on the floor. He has made his characters not just exaggerated, but over the top. Oh, what Groucho Marx could do with this play!

Speaking of over the top, the costumes by Paul H. Canada are scrumptious, especially the huge wigs. The simple drawing room set, with handwritten lines from books adorning the walls, is nifty.

When the play ends, though, you say to yourself, where was 1672 France? Nowhere. Moliere wrote a play and left out everything except the drawing room. History was rich in France in that era and Moliere missed it. You might argue that contemporary writers do that, too. They write a play in 1939 and just tell you what 1939 was like. You find out something about the era, though. Here, there is nothing about the latter part of the seventeenth century. History was rich in France, then, too.

The play was written right in the middle of the long reign of King Louis XIV, the extravagant Sun King. Louis followed a line of monarchs who ruled in tumultuous years. He became very powerful. He instituted a national tax system, created a strong central government, divided up the country into 36 sections and let artists like Moliere and others flourish. He built the palace at Versailles, a mammoth home that symbolized the grandeur and status of the King. It was a magnificent time and yet in Learned Ladies we learn absolutely nothing of it.

So, see the play and read a book.