How Schools Have Changed in Fifty Years 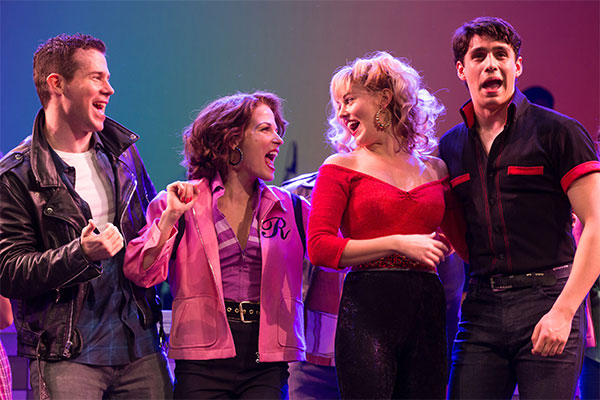 There is a wondrous moment in the musical Grease, one of the country’s most staged plays. Greaser Kenickie drives his beat up old car into a garage and he and his friends dance all over it singing ‘Greased Lightning.’ They plan to turn it into the world’s most beautiful, fastest automobile, the hot rod of all time. And they do, with a lot of ‘bob she bops’ in between. It is a 1959 high school student’s fast car, fast girls and fast life dream

It is the highlight of the show, still a delight after all these years. I was eager to see it at New Jersey’s Paper Mill Playhouse, as I am always eager to catch the movie Grease on television.

Then Elliot Rodger went on his shooting spree at the University of California at Santa Barbara, killing six people and wounding 13 in yet another American school massacre. As always, police said the dead count might have been much higher. As always, the campus was not prepared for the onslaught. As always, when the bodies were buried, nobody understood why Rodger did it.

The University of California massacre and the shootings at Seattle Pacific University were buckets of cold water thrown over my expectations when I went to see and write about Grease. The world of high school and college America has changed and changed dramatically in the nearly fifty years since Danny Zuko romanced Sandy and the fast cars raced down streets in Grease. Schools have changed and students have changed.

For those who can remember the ‘50s, and I can, it was a world of Elvis Presley, sock hop dances, girls with diaries, combs, poodle skirts, a world when most teens smoked cigarettes (which were NOT bad for you then, everybody said). There was Life magazine, Top Forty radio stations, New York Yankee domination of baseball, big cars. Nobody texted each other, took ecstasy, went to school half naked or talked of heroin epidemics. Students did not learn the three R’s from an online computer program.

And nobody went to school to massacre their classmates.

Santa Barbara, Columbine, Virginia Tech. Sandy Hook. The list of school mass killings is long and sad. Schools today, whether the low performance of students or the danger that lurks, are a far cry from what they were in 1959.

That is what makes Grease so enjoyable, though. If theater is suspension of disbelief, Grease is complete abandonment of it. That is precisely why Grease has been so successful all these years.

The Paper Mill production of Grease, that opened last week, is a smooth, enjoyable one, full of delightful rock and roll music, an adorable love story between Danny and Sandy, hot chicks like Rizzo, beauty school drops outs, DJ Vince Fontaine and, of course, ‘greased lightning.’ It is a nice escapist trip back to a time in America when the Beatles were still in High School, John F. Kennedy was in the Senate and Americans thought the space race was the quest for larger apartments.

In Grease, Sandy has just transferred to Rydell High, where she meets Danny, her previous summer’s love and one of the school’s ‘greasers,’ the boys with the long, slick hair and leather jackets. . Neither is willing to commit to each other because of peer pressure, though, and they remain miserable. The girls help Sandy to get down and the boys try to make Danny super cool. Others have problems, too. Kenickie can’t get his car ready. Rizzo thinks she is pregnant, her friend can’t decide whether to leave school and become a beautician. Another girl wants to marry her Marine, far away from home. Eugene can’t find himself. There is a mention of a gang rumble, but only for a few seconds.

The main tale is the romance between Danny and Sandy. Zuko is a mixed up kid who does not know what he wants to do, where he wants to go or when he wants to get there. He loves Sandy, though, almost loses her, gets her back and, with everybody else in Rydell High, rides off into the sunset at the end of the play, waving and smiling.

The musical has been pure show business magic. It opened on Broadway in 1972 and, with 3,888 performances, became one of the five longest running shows in theater history, with two Broadway revivals and countless regional productions. It was turned into a hit movie in 1978 with John Travolta and Olivia New ton John and went on to earn $394 million worldwide, making it the most successful movie musical ever.

The Paper Mil show, well-directed by Daniel Goldstein and choreographed by Joann Hunter, is full of fine performances. Among the best are Tylor Louderman as Sandy, Bobby Conte Thornton as Danny, Morgan Weed as the salty Rizzo, Shane Donovan as Kenickie, Dana Steingold as Frenchie and Telly Leung as the Teen Angel.

The sets, that slide on and off stage in front of the orchestra, are quaint reminders of the ‘50s and the car, greased lightning, becomes a marvelous sports car right in front of your eyes in a scenic tour de force.

The music, that we all know, is rock and roll heaven, from the thumping Summer Nights, Born to Hand Jive and You’re the One That I Want and, Greased Lightning, to the slow and lovely Look at Me, I’m Sandra Dee, Hopelessly Devoted to You and, of course, Beauty School Drop Out.

Was high school really like that in the 1950s? Of course not. Grease gives us a fantasy high school in a fantasy world. Entertainment always does that. These days, we need it.