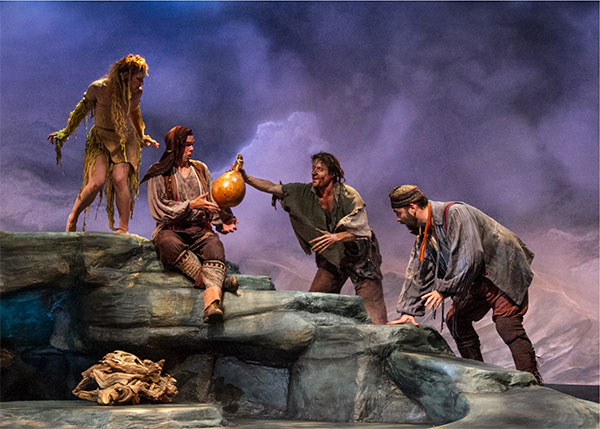 It takes the writers of the Law and Order television series about three weeks to rewrite news events as fictional dramas for their show, but it might have taken William Shakespeare an even shorter period of time to produce his play The Tempest after reading about a shipwreck off the coast of Bermuda in 1609.

The Bard, like any good writer, was always looking for a story from the headlines to spin into an enchanted tale and in 1609 he found one on the reefs of Bermuda. The Sea Venture, carrying 158 British men and women on their way to the new Jamestown colony in Virginia, sailed into a fierce storm and sank, as so many ships would do in later years. The people on the ship noticed a “St. Elmo’s fire” light effect on the island as they fled the ship and made their way to shore. The story was big news in the London newspapers when the travelers returned to report it.

At the time, business was bleak in the theater and Shakespeare, nearing the end of his career, was looking for a “hot property.” He found it in the shipwreck and turned it into the play The Tempest, which has been an often produced work.

The latest version of the play opened last week at the Shakespeare Theater of New Jersey and director Bonnie Monte has milked a lot of the Bard’s humor out of the plight of the shipwrecked voyagers and spun the story into a successful production, even though it has a brittle plot and drags at times.

In The Tempest, the shipwrecked travelers come to the island of Prospero, the former Duke of Milan, who was exiled 12 years earlier with his young daughter, Miranda. by his brother Antonio, who took over. Prospero found a spirit on the island, the beautiful girl Ariel, who does work for him. There is the hint that others live on the island, but you never see them.

On the island, the new arrivals, drawn there with a little magic by Prospero, are panic stricken. Will they be there for days? Months? Years? They include Prospero’s brother, the King of Naples, his son and a few others. They do not know they are on Prospero’s island. Throughout the play, they are the victims of Prospero’s wrath, each other and Ariel.

The first act is taken up with the development of the relationships between Prospero and his daughter. He is a good dad, always concerned about her safety and intent on finding a husband for her. Miranda is a high spirited, romantic girl who plunges head over heels in love with the first shipwrecked survivor she meets. Prospero, in his asides to the audience, is full of wit and wisdom and tries to set himself up as the rightful ruler of Milan, intent on returning to the throne. His brother and his colleagues are a rather deceitful and l=malevolent people and you hope they get their come uppance in the end.

Little happens in the play, but director Monte gets wonderful performances from all. In act two there is a hilarious scene in which Prospero’s slave, Caliban, dressed as a dragon of some sort, cavorts with the King of Naples jester, Trinculo. The two men thrash around under the dragon suit and produce more laughs that Laurel and Hardy with the piano going up the outdoor staircase in Los Angeles.

Monte exercises a light hand in directing the play and finds all the wit in it. It is not a heavy duty play and, coming at the end of Shakespeare’s life, not one of his best works.

It succeeds, though, because the actors are superb. Sherman Howard is a towering Prospero, with white hair and full beard and a regal stature. Lindsey Kyler is a real discovery as Miranda. She is full of love for her father and island Romeo. Erin Partin, as Ariel, nearly steals the show with her songs, devilish looks and whirlwind activity around the large rock stage set. Patrick Toon, as Trinculo, is superb, as are the other members of the cast.

Shakespeare set the play on an island in the Mediterranean, not Bermuda, which was a shame because if set in Bermuda it would have had an American feel to it and would have connected with all the shipwrecks there over the years later. It is, however, a wonderful look at the cutthroat politics of Europe at that time, when even brothers exiled each other to grab power.