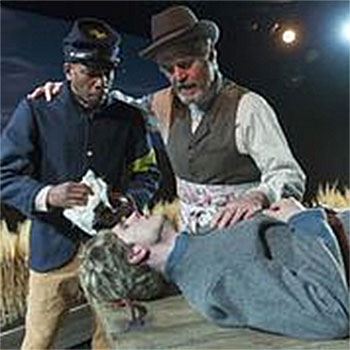 It rained hard while I was inside the H.E.R.E. theater watching the plays Sawbones and Diamond Eater last week. That was good. The driving rain washed away the bloody death and destruction, and the evil of war, on stage inside the playhouse.

Sawbones and Diamond Eater are two one act plays by the same author, Carrie Robbins. One is the story of a heroic Union doctor and black freedman assistant in the Civil War and the other is the tale of a sadistic Nazi who orders a Jewish doctor to perform an illegal, experimental operation on a Jewish prisoner at a concentration camp in World War II. They are absorbing tales of medicine in wartime, a story that is not addressed very often in entertainment.

The Civil War saga is the story of Jedidiah Wall, who drags Elmer Cobb, a wounded Confederate soldier, into a Union hospital and lays him down on the primitive wood wartime operating table of Dr. Cordell Cuttaridge. The doctor knows the boy, shot in the leg, needs an amputation. He plans to do it but is nearly stopped by a rebel-hating Union Sergeant, Rupert McElwain. He tells the doctor that they can’t save the lives of enemy soldiers, but the doctor argues that Cobb is an American, just like them. The doctor tries to save him, but Cobb dies.

The play then moves ahead in time, to the American West, where the friendly Dr. Cuttaridge treats numerous people in different towns, helping all that he can. One day, he is urgently called to the ranch of Thom Beauregard, whose mother is having a difficult child birth. There, the doctor is confronted by a Union veteran who denounces him for cutting off his leg in the Civil War, even though the amputation saved his life. This happens while the woman is about to die in childbirth. There is an explosive confrontation.

Even though it is about a rough subject, Sawbones is a charming and beautiful play about the human condition and the many ways that both sides, North and South, worked to re-unite after the war. The doctor’s job is not to choose whom to save, but to save everybody he can. He does that in the war and out west. Robbins shows him as a loving, generous man who has helped dozens of people in his years out west. He wrote a medical school letter of recommendation for the black private in the war, befriended dozens in the western territory, delivered hundreds of babies and went to dozens of funerals. He was a good man. There is a tremendous stirring of the American spirit in the doctor, and the play.

It is also an historical gem. There are few plays or movies about the history of medicine, and it is a fascinating subject. In the play, you learn, correctly, that half the 630,000 men who died in the war did not on the battlefield, but of their wounds and diseases. You learn that half the men who were operated on died and that if anyone was shot anywhere gangrene might set in and take their life. You learn about the crude methods of surgery and the primitive instruments. The gorgeous, simple countryside sets, and buckboards and kitchen tables by designer Brandon McNeel give the entire play the sweeping feel of a movie.

The play, based on a true story, is well directed by Tazewell Thompson. He gets stellar performances by Gregory Marlowe as the black solder, Wall, Wynn Harmon as Dr. Cuttaridge, Alexander Salamat as Sgt. McElwain and Erika Rolfsrud as Cuttaridge’s boarding house landlord.

Hurray for Dr, Cuttaridge and all the Sawbones on both sides in the war.

The Diamond Eater is a much grimmer play. It starts with a haunting back wall sketch of a Nazi concentration camp with eerie music. A Jewish doctor, a prisoner in the camp, is ordered by his Nazi commandant to transplant the kidney of a gypsy into a Jew (who eats diamonds to hide them) to see if it works. The doctor does not want to do it, but will be killed if he refuses. He and another doctor, an anestheseologist before the war, do the operation, but add a little something to it.

We have seen hundreds of movies, television series and documentaries about the Holocaust, and we need to see hundreds more. The Nazis were able to get away with an experimental operation that they would be imprisoned for in the outside world. They did it because they could.

The play is provocative. The Jews in their striped uniforms are chilling and within minutes they lose most of their hope of survival. The stories of their extermination in the camps, and how Nazi guards always came down with headaches from the smell of the poison gas used to kill the Jews, are nerve wracking.

The play does not have all of the layered drama you expect in a one hour work, or the nuance, but is effective.

The history in this play, too, is superb. The experimental operations of Dr. Josef Mengele, at Auschwitz, and others, plus crazy sexual experiments on Jews, were one of the tragic medical stories of World War II. These were carried on routinely and the Jews were the guinea pigs for speculative and cruel medicine (Mengele escaped and died many years later in South America).

Brandon McNeel’s sets here, too, are superb, especially the scene in which he creates a snowstorm and uses a wall of plastic to make the snow shimmer as the doctor walks through it, top of his uniform pulled tight against his neck to keep himself warm.

You sit in the audience and hope that the two doctors succeed in their little scheme, but whether they do or not still leaves you shuddering.

Director Thompson gets good work from Timothy Roselie as Dr. Kuttermann, Wynn Harmon as Dr. Polsky, Eric Kuttner as the diamond eater and Tony Naumovski as the Nazi commander.

Never again, for sure.