Motown: the Musical and Its ‘60s History Headed to Motown the City 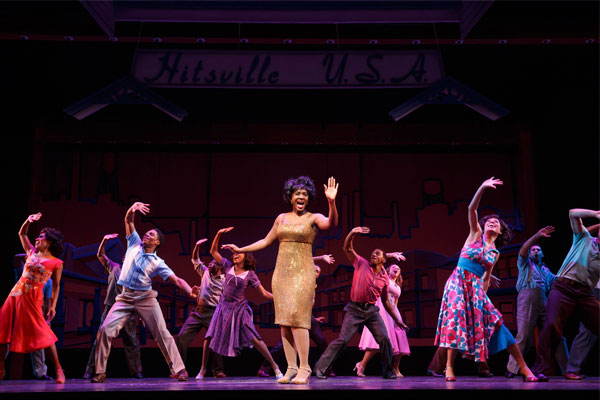 The show Motown: the Musical, that tells the story of Berry Gordy Jr.’s record company and rock and roll music in Detroit and in the nation from 1959 to 1983, is finally headed to Motown. The musical will continue in New York, but a traveling company is headed across the country, with a big welcome planned for it in Detroit, the Motor City, in October.

Motown opened in New York last year and was an immediate hit. It is still one of the strongest running shows in New York. The play is a marvelous, foot stomping look at the history of the rock music business through the eyes of Gordy, who wrote the book of the play based on his autobiography.

Motown is a tantalizing (although a bit biased since Gordy is writing about himself) behind the scenes peek at the music business, Detroit and racism in America fifty years ago. It tells the story of Gordy’s romance with Diana Ross, the original lead singer of the Supremes, his discovery of the Jackson 5 and Stevie Wonder and his management of dozens of other entertainers and groups, including Marvin Gaye, Smokey Robinson, Stevie Wonder, Gladys Knight and the Pips and The Temptations.

And, best of all, it is jammed packed with all those fabulous Motown hits, such as Baby Love, Stop in the Name of Love, Baby, I Need Your Lovin’, Dancing in the Streets, Do You Love Me?, I Can’t Help Myself (Sugar Pie Honey), I heard It Through the Grapevine, I’ll Be There, My Girl, Please Mr. Postman, Shot Gun and What’s Goin’ On. Audiences love it.

The touring company is playing at the Oriental Theater in Chicago through Aug. 9. Then it is on to the Orpheum Theater in San Francisco (Aug.15 – September 28), then the State Theater in Cleveland (Oct. 3 – 19) and then to Motown (Detroit), (Oct. 21 – Nov. 15). After that, the show rolls on to St. Louis, Kansas City, Minneapolis, Pittsburgh, Philadelphia and other cities.

The play, set at the 1983 television taping of the 25th anniversary of Motown, is similar to Jersey Boys in that it tells the story of Gordy’s life and company and, expanding outwards, the lives of entertainers who worked for him and the music they produced. The heart of the show is story of Berry, who failed at everything he tried until he started Motown in Detroit in 1959 with an $800 loan. There, he used his inordinate skills to predict what records would sell well and what singers and what groups would appeal to the public to build his company into one of the biggest in the world (one year in the ‘60s it had five of the top ten records in the country and in the 1960s decade had 28 number one hits).

In the story, we see all of Berry’s successes and some of his failures. He made a lot of money and became famous, but many of his singers and groups left him, he split with Diana Ross and he was accused of shortchanging his stars on money owed them. His story was far more complicated than that, but this is just a 2 ½ hour play.

The play is loaded with musical history, such as the formation of the Supremes and the Jacksons audition for him, but it is loaded with real American history, too. Gordy had great success sending a Motown All Star show around the country, but in one city it was canceled and played two more cities under death threats form the KKK. There are mentions of race riots following the assassination of Martin Luther King Jr. in 1968.

There is a lot of history on ‘race music,’ the Motown style songs, and songs of other black artists, that delivered black music to a larger white American audience. There is a lot of talk in the play about how black entertainers’ success in music helped to integrate the country, which is certainly true. There is a dramatic change in music in the late 1960s that reflects the protests and violence in the country tired to the Vietnam War, student unrest and the Civil Rights clashes.

Director Charles Randolph-Wright did a superb job of presenting the story of Gordy and the Motown family within the concert like musical selections that opened and closed the show and dominate it. Randolph-Wright also did fine work in putting the spotlight on the race issues of the play, even though that side of the musical might have been stronger than it is (the performers mention Emmett Till but do not mention the slain Mississippi Civil Rights workers or talk much about those injured in clashes with police at Selma, Alabama and other cities where protest marchers clogged the streets.

Even so, Gordy and his colleagues confronted the history of their times well and anybody seeing the play today on the tour or in New York gets a gripping explanation of the racial history of the 1960s and ‘70s, as well as a look at a collect of rock and roll superstars and the fabulous music they produced at Motown.

No city needs a trip back to the good old days more than Detroit, which has deteriorated badly over the last few decades. In 1950, Detroit had 1.8 million people and today it has just 700,000. Businesses have fled. Forbes magazine has ranked it America’s most dangerous city for the last five years and last year its murder rate was nearly six times the national average. In 2013, the city plunged into bankruptcy with debts of nearly $20 billion. A recent Mayor went to jail. The city today is littered with abandoned buildings. If anybody needs some “baby love,” it is Detroit.