Love Him or Hate Him, LBJ Was a Political Genius 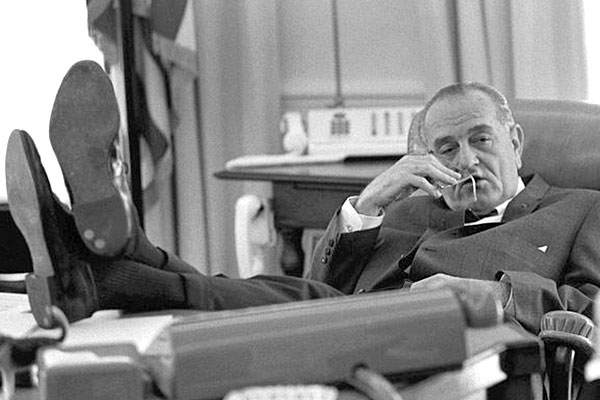 As soon as actor Bryan Cranston begins to speak in the play All the Way, you think that you are in a theater with the real Lyndon Johnson. Then, when he stands and moves about the stage with that special awkward Johnson gait, leans in close to talk to people and throws his head back in astonishment at something told to him, as Johnson did, you are certain.

Bryan Cranston (the illustrious star of TV’s Breaking Bad) is LBJ and in All the Way, the story of how Johnson got the landmark 1964 Civil Rights Act passed, he delivers one of the most profound. impressive and delightful performance that Broadway has seen in many a year.

This play is a history buff’s delight. It is a delicious behind the scenes look at how Johnson operated as President, as any President operates. The wheeling and dealing, promises, threats and sheer back slapping and cajoling that goes on in the LBJ White House is a pleasure to watch. Anybody who sees this play completely understands how difficult it was for Johnson, for anybody, to be President.

The play beings with John F. Kennedy’s murder and the elevation to the Presidency of Johnson, who ran against him in the 1960 Democratic primaries. Johnson, a southern democrat, makes the transition to the White House easily and within the hour is assuming the role of master politician, Johnson does not fit the job; the job fits him.

One of his first steps as Chief Executive is to get JFK’s Civil Rights bill passed, something that in 1964’s racist America was hard to do. He goes at it full throttle, calling in every favor that any Congressman or Senator ever owed him and making deals, it seems, with everybody. He even makes deals with his wife and kids. When he hits rock bottom, and has no reason to get somebody to do what he wants, he makes things up, on the spot. It never bothered him. The prize, the integration of the country, was his goal.

The play, by veteran playwright and Pulitzer Prize winner Robert Schenkkan, is a colorful look at one of our most colorful Presidents. Everything you remember about LBJ is in the story – the bawdy jokes, the strident lobbying, the twangy Texas voice, all of the Birds, his battles with Bobby Kennedy, his needed friendship with Hubert Humphrey, his forced friendship with Martin Luther King, Jr. and even the incident when he picked up his dog by both ears to the horror of pet lovers. It is a vivid look at the personal and professional life of a flamboyant giant in American history.

The play succeeds because it targets the civil Rights Act and nothing else. IF the playwright had put in Johnson’s earlier life and the rest of Johnson’s Presidency it would have failed (that is why Steven Spielberg’s movie Lincoln worked so well).

Throughout the drama, that is at times very funny, Johnson twists arms up and down Pennsylvania Avenue. He takes advantage of the split in the black leadership Civil Rights movement, manipulates the press, props up friends and smooth-talks enemies. He pulls the voting rights section of the bill out early to placate opponents but promises to put it back the following year.

The plays ends on a chilling note. LBJ is celebrating his landslide victory over Barry Goldwater in the 1964 election and an aide brings him an urgent telegram from the U.S. Ambassador in Saigon.

All the Way is Christmas come early for history lovers. Schenkkan has, in his titanic success, discussed just about everything ab out the early 1960s. You find out things you had forgotten, such as the torrid battle between white and black delegates from Mississippi demanding to be seated at the 1964 Democratic Convention in Atlantic City and LBJ’s rocky relationship with J. Edgar Hoover. It is an admirable portrait and shows Johnson just as he was, the master politician, the wheeler dealer supreme. On another level, it shows him as a Southern Democrat, born and raised in a racist area of the country, which turns his back on the bigots around him and gave the country one of the most important bills in its history, knowing full well that doing so might end his career because of southern reaction. It is a study of a diplomatic mastermind and a man who uses his gargantuan personality as well as his political skills to be successful.

And it poses the never ending question:  how could a man with such political savvy get himself involved, and brought down, by the Vietnam War? This month is the 50th anniversary of the signing of the Civil Rights Act and no matter what newspaper you read or TV station you watch there are news stories and documentaries about it and in all of them there is Vietnam. The war ruined Johnson’s reputation and place in history.

Now, though, through history’s hindsight, the passing of years and works such as All the Way, we can see that at least on the domestic side, with the Civil Rights Act, the war on Poverty and the Voting Rights Act, LBJ was a pretty good President.

But then, of course, there was Vietnam.

Director Bill Rauch did a fine job with the play. He worked with a large cast, but understood that this story was about LBJ and kept the action spinning around the superb Cranston. In addition to the memorable performance by Cranston, Rauch got fine work from the entire cast, including Christopher Liam More as aide Walter Jenkins, Robert Petkoff as Hubert Humphrey ,Brandon J. Dirden as Martin Luther King Jr. and  Rob Campbell as George Wallace.