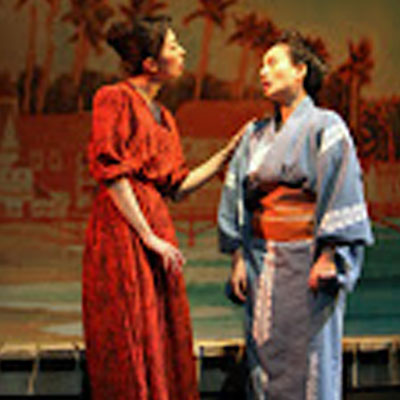 In 1908, Japan and the United States entered into a “gentleman’s agreement” that prohibited further Japanese immigration to America. Japanese males in the U.S. already, particularly the territory of Hawaii, were soon starved for love and affection with the flood of women ended. They, and women and families in Japan, invented the ‘picture bride’ industry that, over the next twenty years or so, resulted in the arrival of nearly 10,000 young women, mostly to Hawaii, as the newly wed and unseen spouses of Japanese laborers. These women and their men exchanged letters and, most importantly, photos of themselves, in order to make a successful match (today they would all be on internet match sites). The women married, cared for families and worked in Hawaii (38% of all sugar cane laborers in that era were Japanese women). The photographic women and their snap shot men solved the immigrant dilemna and, at the same time, began the growth of a strong Japanese presence in Hawaii.

Fishing for Wives, a new play by Edward Sakamoto that opened last week, tells the story of two itinerant Hawaiian fishermen in 1913. Nishi Takeo, an overweight, bald, unattractive man, sends his bride to be the photo of his friend, tall, thin and handsome Aoki Tsutomo. The bride, Yamamoto,  thrilled, arrives with a big smile on her face a few months later. She is shocked, to say the least, at the photo switch and tumbles into a relationship with Aoki instead.

Later, a second bride arrives for Aoki. This one is a pushy, loud mouthed bully who, it turns out, isn’t interested in marriage as much as she is an escape from japan to the land of opportunity, Hawaii. She is also isn’t as interested in men as she is in women and falls into bed with a very confused and perplexed Yamamoto.

Finally, yet a third bride arrives on an ocean liner for the bereft Aoki, whose head is reeling from all these women and the changes they bring to his life.

Fishing for Wives is at times tender and at times rough. It is romantic and funny. The performers, Bobby Foley (Aoki), Viet Vo (Nishi). Kryo Takami  (Yamamoto), and Umeko (Rebecca Lee Lerman), Akiko Hiroshima, and Allison Hiroto, as the other brides, all do a fine job. The direction by  Ron Nakahara is efficient.

The problem with the play is that it has this marvelous and colorful historical subject, the ‘picture brides,’ but does little with it. The plot is ridiculously simple (except for the bisexual bride) and basically a one joke story.

Japan’s picture bride tale is fabulous. The men needed the women and the women were perfectly willing to go,  some in search of husbands, some desperate to leave Japan and  some shoved on to ocean liners by their parents to get rid of them. The men in Hawaii and the U.S. who arranged the marriages almost always turned out to be ten to fifteen years older than they said in their letters, earned far less money, lived in much smaller houses and, worst of all, usually sent photos of them as 21 year olds or, worse, had photo studios touch up their pictures to make them look good.

The ‘picture brides,’ almost all of them duped, had to either go back home or stay in Hawaii and hope for the best. Most stayed in the marriages but others did not marry and stayed in the islands and later married someone else. The families had kids and started family dynasties. By 1920, the Japanese represented almost 50% of all the residents of Hawaii and the ‘picture’ couples made up 15% of them. They all had intriguing stories, but you learn few of them in the play.

The play is set in 1913. There is nothing, and I mean nothing, about 1913 Hawaii in this. There is a large scrim painting of a fishing village that could have been done Tuesday and the clothing is pretty modern, too. At the tail end of the play, someone says that in 100 years Hawaii will be proud of its picture brides, but that’s it.

This is the latest Pan Asian Theater play and they missed a good story. They also missed a lot of interesting things about Hawaii in the 1913 era that theatergoers would love. 1910 - 1920 was the decade when the gorgeous big hotels began to line Waikiki Beach in Honolulu, when the first ocean liners began runs between Honolulu and California, when the first dial telephones were introduced in Oahu, when pineapple started to be grown as a crop and turned into a billion dollar business, when surfing began to grow as a sport, when big sports clubs began to dot the beaches of the different islands and when gifted swimmer Duke Kahanamoku began to win races and gain enormous publicity.

None of these events or people appear in the play. It is a shame. The writer and director missed a lot of colorful Hawaiian history.