Jonathan Dresner is associate professor of East Asian history at Pittsburg State University in Kansas, and an assistant editor at HNN. You can find his previous review of Tom Cruise's Last Samurai here. 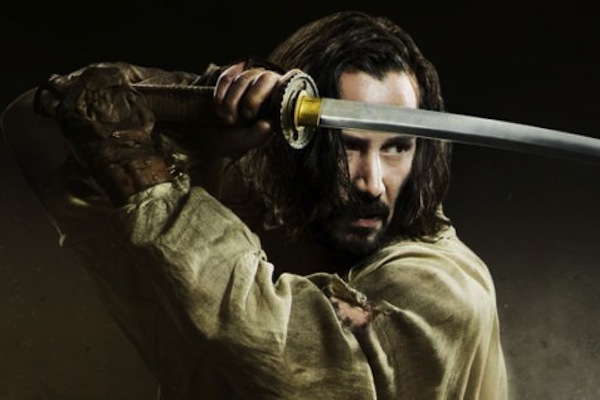 Keanu Reeves stars in the new version of 47 Ronin.

Almost immediately, when the forty-odd former retainers of the Ako domain took revenge on the daimyo lord who was blamed for their daimyo lord's death and their loss of status, Japanese began retelling the dramatic tale, and fictionalizing it. In fact, for the first forty-five years or so after 1703, it seems like nobody who wrote a new version of the story removed any elements: they just added new ones. The epitome, for many, is the 1748 puppet play -- Bunraku puppetry was as rich a dramatic tradition as Noh or Kabuki, or Shakespearean works, for that matter -- Kanadehon Chushingura, or The A-B-C Storehouse of Loyal Retainers which includes brothel scenes, complex romantic entanglements, a lecherous, grasping villain, bold samurai women, hunters, brigands, and several contenders for the longest death scenes in dramatic history. This version, considered by many to be the canonical baseline for all subsequent productions, is grossly ahistorical in several ways: as Stephen Turnbull has shown, among others, the avenged lord was almost certainly an incompetent cad, and the ultimately slain villain a dedicated and honest man, and the sentence of death and disbandment laid down on the Ako daimyo and samurai certainly a just one by the law and principles of eighteenth century Japan.

This is part of what makes the story so interesting, and the incident so well-documented. It was discussed at the highest levels of the Tokugawa Shogunate, at a time when that government was served by some of the leading intellects of one of Japan's cultural golden ages. The debate centered around the relationship between law, order, cultural and political values, and the potential for heroic transcendence in an increasingly bureaucratic age. As Eiko Ikegami argues, among others, in the 16th, 17th and 18th centuries the warrior tradition in Japan was being transformed from a rough-and-tumble struggle for glory and reward to self-denying institutional loyalty. "Bushido" in its most aggressive form -- constant readiness for death, fear of dishonor, punctilious status consciousness -- was a product of peacetime bureaucracy, and the realization that anything other than strict obedience and competency would result in loss of position to competitive compatriots.

The Ako Incident (named after the samurai's home domain, though the most critical events took place almost entirely in the capital city of Edo, now Tokyo) was an odd hybrid event: a throwback to the days when samurai could act autonomously (and profit from it), when vendettas and blood feuds drove disorder, mass violence; but also a very modern act of self-sacrifice for honor, the elevation of institutional loyalty over principles of justice, and submission to the law after the fact. In the end, the Tokugawa Shogunate took a middle path: neither rewarded the ronin for their self-declared bravery and honor, nor punished them with loss of status, but allowed them to be executed in the manner of samurai, with the perfunctory trappings of ritual suicide. Such was the fate of any who threatened the Pax Tokugawa by actually enacting the violence which was at the conceptual heart of the socio-political order.

This is a fascinating, complex history, and both the actual historical incident and the traditional dramatizations are stimulating. Keanu Reeves' new version of the tale of the 47 Ronin is none of these things. It's hard to fault the producers and writers for adding elements to the story, when the Japanese have been doing that for centuries: my personal favorite is the immortal Chikamatsu's scene in which a samurai draws a map of the villain Lord Kira's compound on a Go board while dying from a self-inflicted wound to extirpate his sin of losing faith. It's even hard to fault them for simplifying the moral elements of the story: as noted above, almost all Japanese versions make the Ronin vengeance look more justified than it really was, legally and ethically. Modifying a story for a new adaptation is an old game, and when moving from one genre or medium to another, often reasonable, even necessary.

But this new version is boring. Soulless and bloodless. (Literally bloodless, actually: I didn't see any blood shed, despite seppuku and beheadings galore.) Kind of fun to watch in pieces, but deeply derivative. The only hints of intentional humor come from a fat samurai, who dies pointlessly. The narrative changes make no sense, psychologically or culturally. The fox/witch/dragon lady brings a lively element of almost sexy Lady Macbeth to the story, and the fox-vixen is certainly a Japanese tradition, but she's so unsubtle and ineffective in the end that whatever power the role might have had drains away; she does give Keanu Reeves' character something interesting to do once in a while, though. Similarly with the Tengu - a Japanese goblin or devil of some power - who become in this something like religious refugees (historical consultant Stephen Turnbull wrote a book on the "Hidden Christian" communities of Japan), outcastes or non-human ninja. Their leader is described in credits as "Tengu Lord," suggesting something other than a community of faith; their headquarters and the test imposed there was clearly inspired by the Dark Side Tree of Empire Strikes Back. I'm not sure why a sudden shortage of swords was an important plot point, or why all the sword makers lived in one village, or why these ronin don't follow the traditional narratives in using a wide variety of weapons, but it did give the characters a reason to visit the Tengu. The Dutch trading colony at Deshima was transformed into a Pirates of the Caribbean outtake, and Lord Kira's castle complex looks like a second-hand Lord of the Rings movie set; most of the travel scenes looked like Middle Earth, too. One pivotal plot element appears to be lifted from A Knight's Tale, and Lord Kira's fearsome champion warrior may have been borrowed from Dragon: The Bruce Lee Story" though shockingly easily defeated in the end. Incidentally, the fight scene in the last video is better choreographed and acted than any fight scene in 47 Ronin. This may explain why the movie is on a pace to be one of the greatest financial failures of 2013 movie-making (it currently sits at 10 percent on Rotten Tomatoes).

Success or failure, financial or artistic, is less important to me than the question of what sort of effect the movie might have on the historical awareness and understanding of viewers, many of whom may well be in my classrooms in the future. When fiction claims didactic value or historical authenticity, we can then fault it for suggesting that a woman could inherit control of a domain, or that premodern Japanese used hanging as a form of capital punishment, or that authorities would exterminate the entire population of a productive domain for the crime of a few hotheaded samurai, or for putting cherry blossoms in every daylight scene that doesn't happen in a blasted wasteland. Nearly everything in the movie, from a cultural and historical standpoint, is questionable or wrong. Nothing unusual about that, but the movie credits two historical consultants, and begins and ends with voiceover claiming historical and cultural authenticity: "To know the story of the 47 Ronin is to know the heart of old Japan" [quotation approximate; I was writing in the dark as quickly as I could on a first viewing. I'm not going back.] Even discounting the "witches and demons," the movie frames the Tokugawa Shogunate (1603-1868) as "Ancient," "Feudal," and shoguns as "an absolute ruler," none of which is helpful. It perpetuates the myth of samurai as "master swordsmen" and "protectors" and the conclusion praises them for enacting "the old ways of Bushido" as though there were a continuous tradition which had degraded in the contemporary age (but which the Shogun had no desire to actually revive), and suggests that the 47 Ronin are widely honored today in Japan rather than considered an historical curiosity revived briefly by fascist nationalism over half a century ago.

The movie gets one important thing right, and doesn't even realize it. There are no ninja in this version of Japan: the 47 Ronin are sneaky, though, undertaking a commando-style raid which involves the sort of attack-from-behind, disguise-and-surprise tactics usually attributed to the largely fictional anti-heroes of so much Japanese historical drama. The methods they use should, if samurai were strictly honor-bound, invalidate their rhetoric of justice. But neither the original Ako Ronin nor any of the fictional versions that I'm aware of actually grapple seriously with this question. It's too bad. As I've told my students, family, and acquaintances many times, it's a shame that more media creators don't trust the original source material, the actual history, to be captivating, when it so often is much more interesting and dramatic than the fictions.