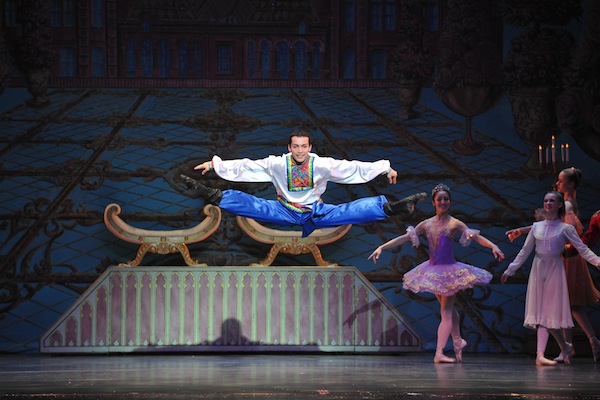 You know that the holiday season has begun when Tchaikovsky’s ballet The Nutcracker is staged across America. Companies produce it in large theaters, such as Lincoln Center in New York, small theaters in Oregon and makeshift theaters in grade schools and churches from coast to coast. The ballet, full of fairy tale heroines, Sugar Plum Fairies, menacing oversized mice, snowstorms and little children, is the premier Christmas entertainment event in this country.

I caught up with the holiday gem on Friday at the opening night of the New Jersey Ballet’s Nutcracker, that I had seen long ago. It was still a delight, a dance chestnut, a Christmas package of charming ballet, magical music, adorable little kids and luscious sets.

The New Jersey Ballet has been staging The Nutcracker since 1971 and, in addition to Tchaikovsky’s marvelous music, its strength has always been beautiful sets and wonderful ensemble dancing, In this production, at Morristown, New Jersey’s Community Theater, it still is.

The story is simple. Friends and family gather in the gorgeous drawing room of a home to celebrate the holidays. Adults do traditional dances and the children cavort amid the presents under an ever growing Christmas tree and dance a bit, too. Two young children, siblings Fritz and Clara, lead the children and, in this production, are majestic in their dancing and fervor. The kids are entertained by a visitor, Drosselmeyer, and eventually go to sleep. Clara slumbers on the couch next to the Nutcracker doll she received as a gift.

A nightmare follows and the evil mice arrive in the house. The frightened Clara is saved by the Nutcracker, who turns into a handsome Prince. The two sail off in a sky gondola as a snowstorm falls on the stage.

In act two, in the Kingdom of Sweets, Clara and the Prince are spectators at a dance party. The party features impressive Arabian, Spanish, Chinese and Russian dancers, a parade a brightly dressed toy soldiers and the huge Mother Ginger, from under whose enormous dress a dozen children explode. The ballet ends with a dazzling grand Pas De Deux by The Sugar Plum Fairy and her cavalier.

The production stage manager, Brian Coakley, who did a superb job with the ballet, gets wonderful performances from Raynor Rubel and Allison Ivan as Fritz and Clara, Humberto Teixeira as Drosselmeyer, Andrew Notarile as the Nutcracker Prince, Leonid Flegmatov as the Muse King, Ruben Rascon as the acrobatic Russian dancer, Risa Mochizuki as the Sugar Plum Fairy and Marlen Alimanov as her cavalier.

Pyotr Ilyich Tchaikovsky’s The Nutcracker is one of history’s most acclaimed ballets. It has been staged in one version or another since 1892, when it debuted at the Marinsky Theater, in St. Petersburg, Russia, on a double bill with the opera Iolanta. The ballet is based on E.T. A. Hoffman’s story The Nutcracker and the Mouse King

The reception of the original Nutcracker was as cold as the temperature in St. Petersburg in the dead of winter. Critics fumed that the party scene was too long and boring and were appalled that the real stars of the ballet were children, and not adults. They were angry that the star ballerina did not appear until near the end of the production. Theatergoers wrote later that they could not believe how dull and confusing the plot was. Everybody, critics and theatergoers, agreed that Tchaikovsky’s music, now rated as one of the best scores in musical history, was perfectly dreadful.

The Nutcracker was rarely staged outside of Russia or in the United States for half a century, but George Balanchine saw the majesty in it and liked the way that it appealed to children. He knew that because he danced the role of the Prince in a 1919 production in his native Russia. In 1954, he was the head of the New York City Ballet and staged his own version of The Nutcracker, with a very American appeal. He promoted and marketed the show heavily. His new version was wildly successful right away.

The success of the New York City Ballet production kicked off a trend. Ballet companies had been stitching together schedules of venerated, but somber, ballets for decades and in The Nutcracker they not only had something fresh and something different, but a production that they could run in the all-important holiday season, when ballet lovers and theatergoers spend a large amount of their entertainment money. The Nutcracker was perfect for the holidays. The Nutcracker is also generational marvel. Parents take their kids to see it and, forty years later, those kids take their own kids.

It is estimated that American ballet companies earn about 40% of their total yearly ticket sales just through The Nutcracker. The show, loaded with child dancers, also attracts thousands of children to classes at ballet schools. During the last few years, because of the recession and drastic arts funding cutbacks by states and federal agencies, the ballet has helped to save hundreds of struggling dance companies.

The ballet offers a nice look at Christmas in Russia during the heyday of the Czars, a time of regal opulence, parties and celebrations. The story takes place in St. Petersburg, one of the world’s most beautiful cities, the historic, longtime capital of Russia and a city steeped in Russian social, cultural and political history.